We have a couple poinsettia plants, this year (both were gifts to a relative). One has red bracts, and the other has smaller white (almost cream) bracts. If you have poinsettias, what are yours like?

I have them a few feet away from a north window.

They really seemed like they needed fertilizer when we got them (especially potassium, since a branch broke off easily), so I gave them some monopotassium phosphate and Miracle Gro, and they perked up pretty nicely. The fertilizers that I gave them seem to slow down the leaf loss; the red one (which we got first) hasn't lost any leaves or bracts in a while. Fertilizer and/or proper light does that to other plants (e.g. my grapefruit tree and my rubber fig--it helps them hold onto their leaves longer), so I figured it would hopefully do the same thing for poinsettias, including for the bracts. So far, my hypothesis seems to be holding up.

The white poinsettia was already dry and had lost several leaves before we got it. The red one was younger (the pollen came out a few days after we got it, or before); we received the white one on 8 Dec 2021, and the red one on 15 Nov 2021.
Location: SW Idaho, USA
Climate: BSk
USDA hardiness zone: 6
Elevation: 2,260 feet
Top

Here's a picture that I just took: 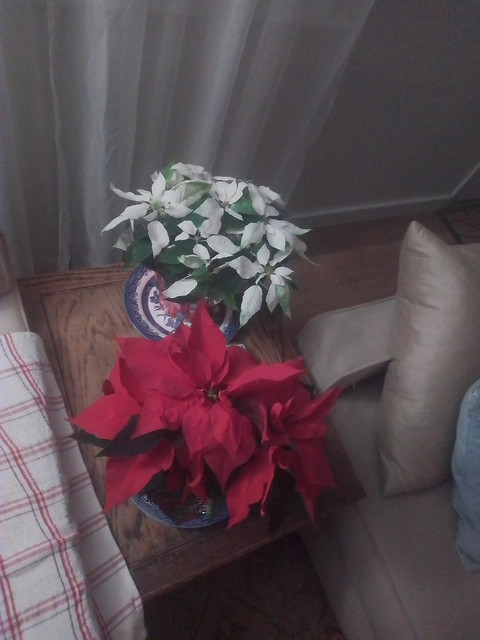 Phipps Conservatory always has a million of those in their winter flower show, in pots, but I'm more interested in the two that are planted in-ground in their permanent display. They're in the Desert Room, which is warm during the day but chilly at night. The two are behind a bunch of cacti that shade them, but they are reaching for a window light that is above them. They're tall, not compact. They put out the showy bracts at this time of year.
Top

I love poinsettias but parts of them are poisonous to cats so I no longer get any since my 2 cats would eat them.

They are full sized shrubs in tropical locations and I have seen them in the Cayman Islands where they were taller than I am.
Top

They are very light photo sysitive.
Meaning any light during the night and they won't turn colors.
Just like a jade plant blooming.
Or at least that's what I've read.
And that was years ago.
Worth
25 miles southeast of Liverpool.

There are no dead end jobs, only dead end people.
Top

My mother had one beside her house in San Antonio, Texas when I was in high school. It was HUGE reaching the eves and almost as big around. It was very happy until we had a hard freeze one year. It died back to the roots but came back the next spring. I don't remember it "blooming" while she lived there but it was an impressive plant.
Wyoming
Zone 5
Elevation : 6,063 ft
Climate : semi-arid
Avg annual rainfall = 16 inches
Top

I have heard Poinsettias are hard to grow...at Colorado State University in fact they use them with the horticulture students to teach horticulture!
Top

Here are my poinsettias today. The red one has lost some leaves, but it still has lots (it seems to lose leaves when the room gets cold or when it nears watering time; when it's consistently warm to warmish, and not near watering time, it looks pretty happy). The white one lost at least a few very small leaves since the last photo. This will be the first year I won't have a poinsettia as I haven't found any decent ones around here. I usually pick one up at Walmart after Thanksgiving but I didn't see any there this year. The ones at local groceries were pretty rangy and thin looking so they can keep 'em! There are no garden centers in the small towns around me and I'm not driving 25 miles to the nearest one. Oh well, I won't have to keep remembering to water it.

How are everyone's poinsettias doing, now?

They have buds for new growth, but they're a lot more developed on the red one.

The white one has some things on some of the leaf stems that I thought were probably scale insects, at first, but they don't seem to be multiplying, particularly (so, I'm guessing they're not scale insects). Edit: I rubbed them off, and I think it was fertilizer.

They should need water again soon.

Here are some pictures of them that I just took (the white one is holding the curtain up to keep it off the Christmas lights by the outlet): 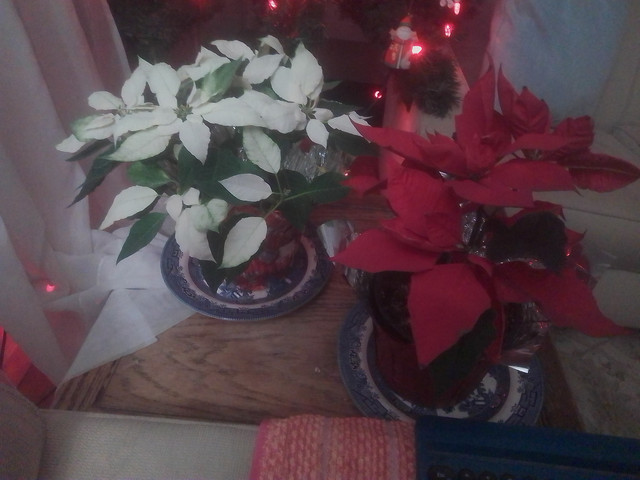 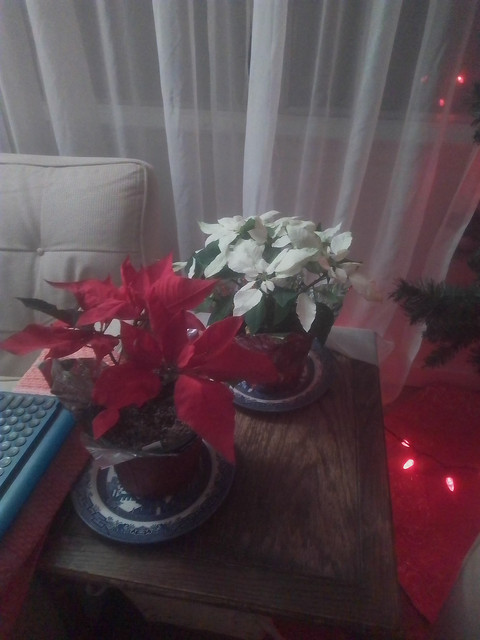 The following picture better shows how the red one has lost many leaves: 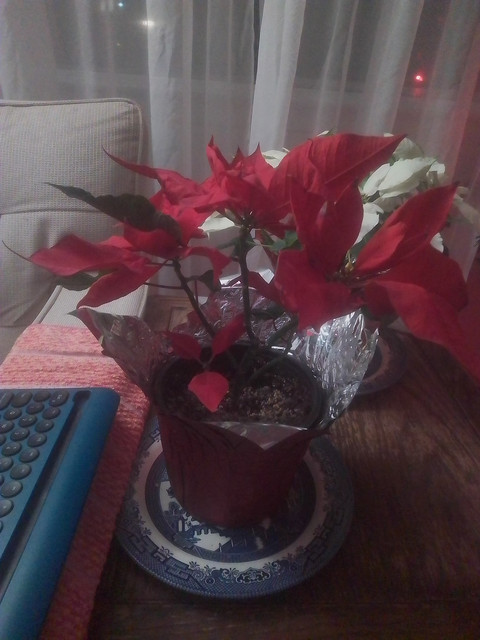 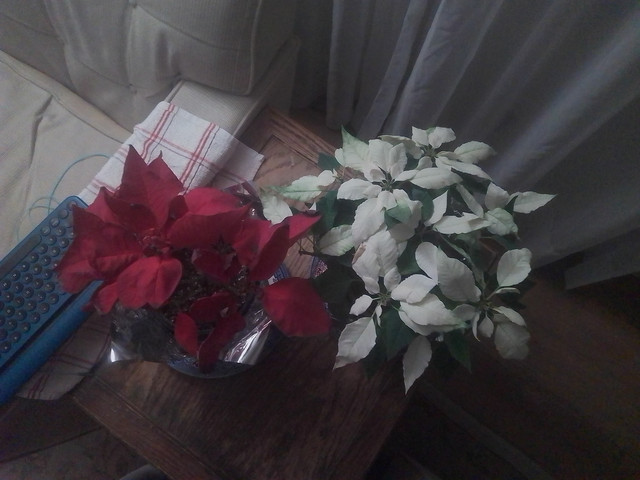 Earlier (before I watered them, before I took the pictures), they lost a few leaves, because they dried out a bit.

The last time I watered them (some weeks ago, before I watered them today), I gave them some wood ash (for the calcium and trace minerals that don't show up in fertilizers). I just gave them water and nothing else, today.

Calcium (I noticed this first with the calcium nitrate) seems to give the plants a great deal of cold-tolerance (when it comes to protection from leaf loss caused by colder-than-ideal temperatures).
Location: SW Idaho, USA
Climate: BSk
USDA hardiness zone: 6
Elevation: 2,260 feet
Top

The red poinsettia has lost a lot more leaves, but it still has some. However, it's growing! There's a shoot with a small leaf (as of some days ago).

The white one has lost a few leaves, but looks similar to last time I posted.

They've both been in colder-than-ideal temperatures for indoor Christmas poinsettias on and off. So, they're doing very well.

I've had some that I've kept alive for a few years. They can grow to be small shrubs.

The red poinsettia is losing its last leaf (which is a bract), today; there are three leaves still attached, but they're dried. Its foliage lasted 4 months and 7 days, or 129 days (from the time we received it).

Apparently, when poinsettias have fewer leaves, they don't use as much water or fertilizer (I knew that about plants, but I forgot to remember that). So, the red poinsettia got some fertilizer burn on the new growth, and that died. It has more buds for future growth.

The white poinsettia still looks about the same as it did in the previous pictures; however, it has been losing some leaves, periodically (especially on the side of the plant that isn't facing the window). I feel like it could go until August.
Location: SW Idaho, USA
Climate: BSk
USDA hardiness zone: 6
Elevation: 2,260 feet
Top

The red poinsettia died, by today (I think from fusarium or verticillium wilt, but I don't know for sure).

The white poinsettia is still going strong and appears to have most of its leaves. It's also been growing new ones for some days, now. The disease that killed the red one is mildly afflicting the white one (the tips of a couple branches withered). Pruning diseased portions off seemed to cause the disease to spread faster in the red one; so, I'm leaving the withered tips on in the white one.