These apricots were from a very old tree. A long time ago, when I was about 12, my mom was driving along the old roads by the airport. It was an air force base during WWII. She suddenly remembered that there was an apricot tree "somewhere around here", we found it, eventually, and it just so happened that the apricots were ripe. I've returned to that tree every year, to pick a few apricots. Other people knew about it too, so I'd mostly just pick up the ones on the ground, enough to throw in the dehydrator or make some jam.

I'm pretty sure the tree has been there since the war, so I'm gonna guess that these seedlings grow true to the mother tree. The apricots are smaller and sweeter and a little more dry, compared to apricots you see in the stores or farmers markets. The tree was neglected for years and years, and looks as healthy as can be. It's next to a parking lot that's now used by the city sometimes, so someone prunes all the trees in that lot now. I don't expect it to be there forever, though, this town likes to cut trees down. The land around it is getting more and more developed.

So, since I have a house now, I decided to try and sprout some seeds. I put them in a ziploc with a damp towel in the fridge for a couple months. I took 4 out, and put them in a new bag and waited for them to sprout, they did, so I planted them in little pots, 3 came up. Then the rest in the fridge started to sprout, so I put them all in the bigger pot, I'll separate them soon. They ALL sprouted, even the ones I cracked getting the shells off. So now I have 11 trees. I need 2 (one would work, too, but my yard needs vegetation badly).

Next spring, the toughest one will go in my front yard, next one in the back, and another in a pot on the patio. The patio tree will be a backup for when I kill one of the first 2

Dawn, you have a great way with words. What a wonderful story. Those seedlings are really special and I am so glad that 2 of them have a place in your yard. Thank you so much for sharing this story. You have made my day!
1

Love hearing about this. Good luck Dawn.
Apricots are wonderful but won’t take the relentless heat and humidity of a Florida summer so I’m making do with pluots.
0
“Never try to outstubborn a cat.”
- Robert A. Heinlein
Top

I've managed to kill 3 (they were on a table, dog jumped up and knocked them down, they're safe now), so now I have 8.
1

A nice story. Perhaps you can contact an agricultural extension to have a look at the tree, as I wonder how valuable its genetics may, or may not, be.
0
Top

[mention]Dawn[/mention] how are you seedlings doing now? I just started a similar journey with 3 pits from a Manchurian Apricot. I am hoping I get at lest one tree form them.

Pit fruits are more likely to be like the parent tree as they often self fertilize and if your special apricot tree is the only one in that area it is probably self fertile. This increases the chances of getting a tree with fruit similar to the parent tree. I think setting one of the seedlings aside to use as rootstock for a graft from the mother tree is a great idea.
0
Wyoming
Zone 5
Elevation : 6,063 ft
Climate : semi-arid
Avg annual rainfall = 16 inches
Top

There are definitely no fruit trees within pollination distance.

I planted the seedlings that survived, and I'm a big dummy and absentmindedly mowed them last year

. But, 2 of them are growing again! So I'm going to block them so I don't mow them again and they should grow up just fine.

It's funny, today I found an apricot seedling in my raised bed (I filled the bed with kitchen scraps, yard waste, and rabbit bedding, them topped it up with dirt, there's lots of interesting stuff coming up

). This one must have been from my neighbor's trees, he has about a dozen. I'll replant that into my back yard.

I'm attaching a picture of the parent apricot tree by the airport.

This was a few weeks ago, it should have leaves by now
2

Ok, the mowed apricot trees, I said 2 were coming back, looked again, 5. That's about how many I planted originally. These things can sure withstand abuse. I can't have them all, I'll keep one and offer the rest for free once they're bigger.
0
Dawn
Zone 6b/7a
Central Washington State (it's a desert here)
Top

[mention]Dawn[/mention] keep an eye on the seedlings you mowed. They may well try to put out multiple shoots, you would probably be better off to limit this to one shoot per plant to form a nice trunk rather than a group of branches that could well develop as a weak spot for future growth.
1

Giggle my three seeds spent a month in the fridge and got planted beginning of this month. 2 of the three have sprouted. The third one is still sitting there thinking about growing...

Grin I may have to ask for some seeds from that tree it is a lovely one.
0
Wyoming
Zone 5
Elevation : 6,063 ft
Climate : semi-arid
Avg annual rainfall = 16 inches
Top

, end of some month

. These apricots are so good, they're dryer than typical apricots you get these days, and sweeter. The apricots from my neighbor's trees aren't as sweet, nor are the ones from the farmers market.
2

Sounds like a beauty indeed Dawn. Would like some seeds also but no point trying to send me some Down Under, no way would they be allowed in.
0
Top

One of my little seedlings is doing well. I knocked over the other cup and lost that seedling and still have one doing nothing... 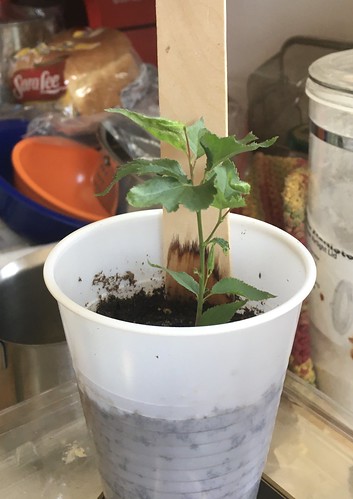 About another week. Not too many this year. They're small this year because it's been so dry. The tree relies on rainfall, so in dry years, we get tiny, but very sweet apricots.

It's weird, the neighbor next to me has apricot trees all around his property. There are about 5 between his building and my patio. This year, all of his trees have fruit, except those next to the patio. I know he didn't go remove the fruit, he's in his 80s and has told us we can pick any of his apricots from anywhere on his property. There's a tree by the alley that's loaded with fruit, so I'll pick from that one, but it's just weird that those trees would be bare (they're not usually). Maybe it's the dry weather again, I haven't seen people watering back there lately.
1