I threw several wonderberries in several planting holes last fall in hopes that they would volunteer, and, they're coming up, in abundance! 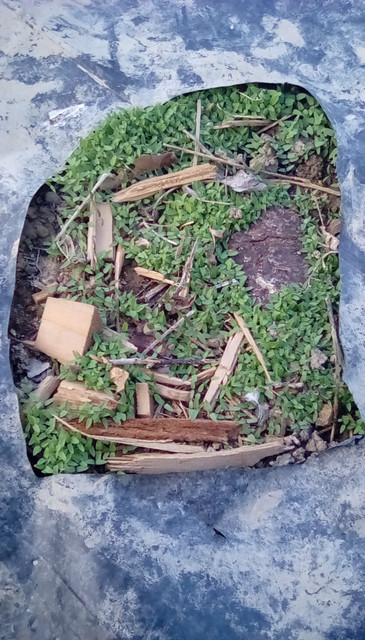 Please excuse the pieces of wood that I need to take out.
2

What exactly is a wonderberry?
0
Top

@Nan6b
It's a tomato relative: Solanum retroflexum (formerly Solanum x burbankii). They get purple/black berries that are about the size of peas. They have a more berry-like taste than tomatoes, but they go well in dishes with tomatoes (salads, pizza, frittatas, and such). People usually get their hopes up thinking they taste like blueberries and then are disappointed that they're quite a bit different. People usually try to make deserts and jams with them, but I think they're better in savory dishes and fresh. I like to freeze the ones that I don't eat fresh.

They fruit earlier than tomatoes tend to do. They fruit all season, but you need to be diligent at picking them if you want them to keep it up properly. The seeds look a lot like ground cherry or tomatillo seeds, and there are quite a few seeds per berry. The leaves are soft. The plants get a few feet tall.

I think they taste a bit like oranges, a bit like huckleberries, a bit like sour watermelon, and maybe a bit like tomatoes, and a little bit like blackberries. Some people complain that they don't have much flavor (but I detect appreciable amounts). They're not super sweet, but they're sweeter than tomatoes tend to be.

People complain about them being tedious to harvest. However, although they're small, they slip easily from the plant, unlike currants and elderberries. My record for a daily picking is 4lbs (from about 22 plants). I hope to beat that record this year. I think they're easier to harvest if you sit in a chair while doing it. If the branches are sprawling, you can lift them up and harvest the berries on them from the chair. I could have harvested more last year.

I find them refreshing fresh.

I'm growing some from a three-fruit fuse, starting them in the greenhouse (I have about six of those plants). My goal is to get larger berries, and more fuses.

I plan to target blossoms that pollinators frequent the most and select for those fruits, too. If they have more nectar, maybe they'll have sweeter fruits.

I've only found a worm in one wonderberry before (and that was late in the season). It looked the same as our blackberry worms.

The plants tolerate drought, heat, cold, shade, full sun, black plastic, and no black plastic, mulch, and no mulch well. I haven't tried them in containers.

Here's a bowl of them from last year (you can see a few aphids crawling on them, unless those are all seeds; at least several are seeds; to get aphids off, I filled it with water and washed them out): 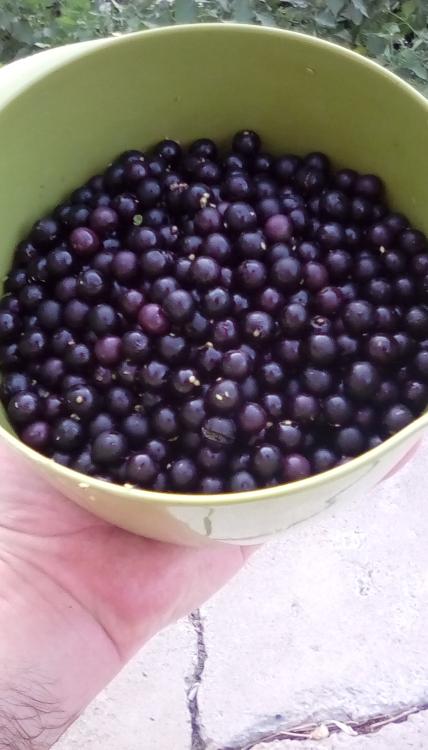 Luther Burbank is the one who bred wonderberries (he's famous for breeding a lot of stuff). He spent 25 years breeding them.

I originally got my seeds from Trade Winds Fruit.

Here's a gallon bag of them that I froze (last year) after taking the picture: 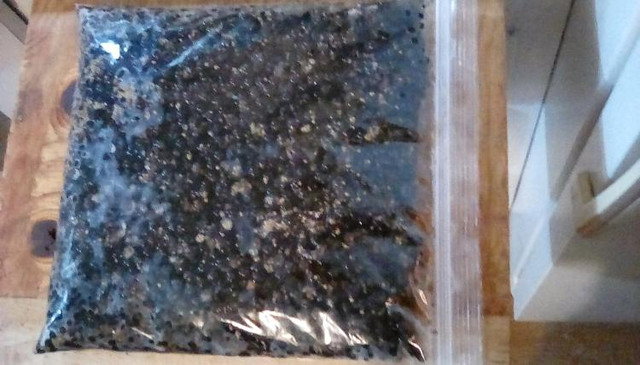 Hey shule how have you been?

How did they taste, frozen compared to fresh?

I had trouble starting them this April. They are smooth little seeds. My tomato seeds in the same tray (2" soil blocks) were sprouting and I'd move them to another tray under lights. After a week or ten days, wonderberry and two swap seed types hadn't germinated and were scrapped. I tried again in micro blocks, which are 3/4", just laying the seed on top and dusting with more mix. Again, my saved seed - cuostralee and cherokee purple - germinated successfully after a few days, and wonderberry did not. Eventually one of those 20 microblocks germinated and seemed like it must indeed be a wonderberry because it was really small compared to full size tomato starts. It is growing now in a solo cup. I think the leaves look a little different than tomato, as well as it being smaller.

Do you find the wonderberry seeds take longer to germinate? I don't baby my seeds much. Maybe if I grew them in their own tray, they all would have germinated at the same time, just later than tomatoes? I noticed the seeds were very clean and smooth looking, not rough and chalky/hairy/dry looking like the fermented tomato seeds I save that germinate in a couple or three days. I still have a bunch of wonderberry seed, many hundreds I suppose, and will try again next year. I should be able to save some of my own seed as well.

Oh, and I mixed the micro blocks that didn't germinate back in with the next soil blocks, pumpkins and squash, and I think I had a half dozen random wonderberry sprouts in there with the additional 4-5 days at 89F which that tray got. Of course, I forgot about them when I put planted those pumpkins and squash. I should have bare rooted them right when I noticed them. They are tiny starts.
1

Other than being super light-sensitive (especially when the weather changes or when the UV is high near a time when the weather changes—and it's been changing a lot, lately; I tend to get headaches, fever, sometimes nausea, and stuff), being a bit depressed at times, and some unmentionables, I'm doing fairly well. The garden is doing excellently. We're getting an unusually high amount of rain for my semi-arid area, and cooler weather a lot of the time (sometimes it spikes up and gets hot for a while, and then it falls again and we have a storm, which brings rain, which brings cooler weather; that cycle seems to be repeating).

I've thinned the wonderberries in those pictures above, and put wire cages on many of them (this is my first year attempting to cage them), as well as on four of my three-fruit fuse wonderberries that I started in the greenhouse. I'm still getting lots of new volunteers in the same spots where I thinned them, though; so, I have to take them out once in a while.

Let's see. Wonderberries taste about the same when they're first frozen, but if they're frozen for a number of months or so, they lose some flavor.

Wonderberries take about the same length of time to sprout as tomatoes for me, but they can potentially take longer, and be more erratic as to when they sprout. I usually overseed.

If you need some extra seeds, let me know (I have several bags stuffed with them). You might try letting me send you a large amount of them, and just direct-seeding them. I'm sure you'll get something (potentially a lot of something, and more plants here and there for several years to come; they seem to be able to stay dormant in soil like weeds can do). Wonderberry plants are smaller than tomato plants when they first sprout (and they don't get big fast the way I sprout them; I transplant them when they're a few inches tall, usually, but probably about 4+" is closer to ideal for faster growth post-transplant). They look kind of like PL tomatoes with smaller, rounder, softer leaves. Or, they're a bit like slightly fuzzy tomatillo seedlings, except smaller.
0
Location: SW Idaho, USA
Climate: BSk
USDA hardiness zone: 6
Elevation: 2,260 feet
Top

That leaf description sounds like what I have in the cup. Smaller, rounder PL leaves. I think some more sprouted when the mix was re-used, but I forgot about them. Maybe they are in the pole beans or the pumpkins, and took root.

I still have plenty of seed, that was a big pack you sent. I think 2019; at least, I didn't note it as old. I probably just didn't wait long enough on either try. Next time I'll start them separately. Next time I mix soil blocks I'll test sprout some on their own. Many of my saved seeds will sprout quicker than seeds from a package. For tomatoes that is golf ball size and up, so the seeds are medium to large. I just ferment the way carolyn described in her book, and then lay out on paper plate to dry. The way I start I have slower starts/more misses with cherry tomato size than with big tomatoes, so wonderberry might not like the process.
0
Top

I started getting ripe fruits yesterday or so, but I got quite a few for a beginning! They're even tastier and sweeter to my tongue, this year, and I think a bit bigger, too, but a relative thinks they don't have much taste, as usual (which is confusing, but to each their own).

None of my fruits that I've seen are fused, though. The volunteer with the most sun got ripe fruits first (although one of the shaded three-fruit fuse plants set fruit first). Both groups had ripe fruit, today, though.

My Galapagos Island tomato got ripe fruit first. And Esterina F1 got a mostly ripe fruit at the same time. So, I guess they're not earlier than all tomatoes (just earlier than most tomatoes, as with last year, too; I thought maybe last year was a fluke). However, I've had more ripe wonderberries by now than I've had tomatoes.
0
Location: SW Idaho, USA
Climate: BSk
USDA hardiness zone: 6
Elevation: 2,260 feet
Top

I've decided that fresh wonderberries taste quite good with ham, maybe four berries per bite of ham. I suppose they'd probably be excellent cooked onto, or with it, too, but I haven't tried it. Actually, it enhances the ham if I eat some berries right before I eat a bite of ham, too. No need to eat them at the exact same time.

Here are some that I harvested, today!

Found a healthy way to eat them I see!

My one plant is in the ground but on the evening side of an existing row. Be a while until I can try some.
1