There are hummingbirds and there are other birds. Here are a few of the ones that live around here.

These cheeky rascals, Stellars Jays, are the bird symbol of British Columbia. 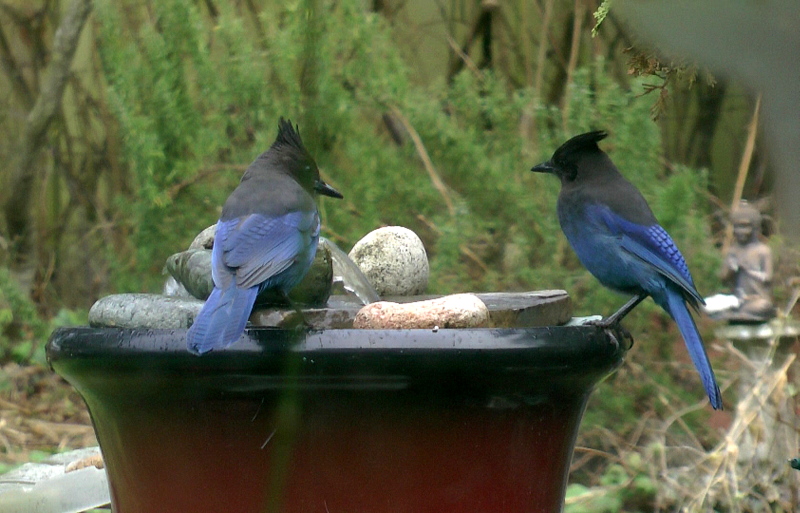 Their close kin, the Crow, also here for a drink. Water is such a magnet but a fountain is a chore of cleaning! 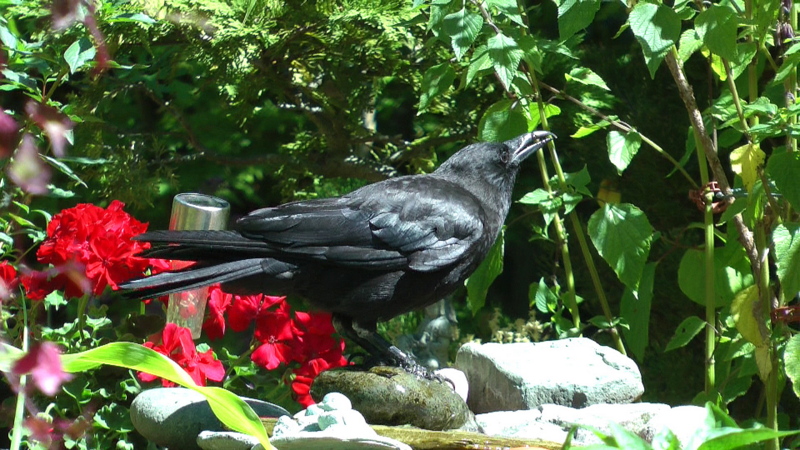 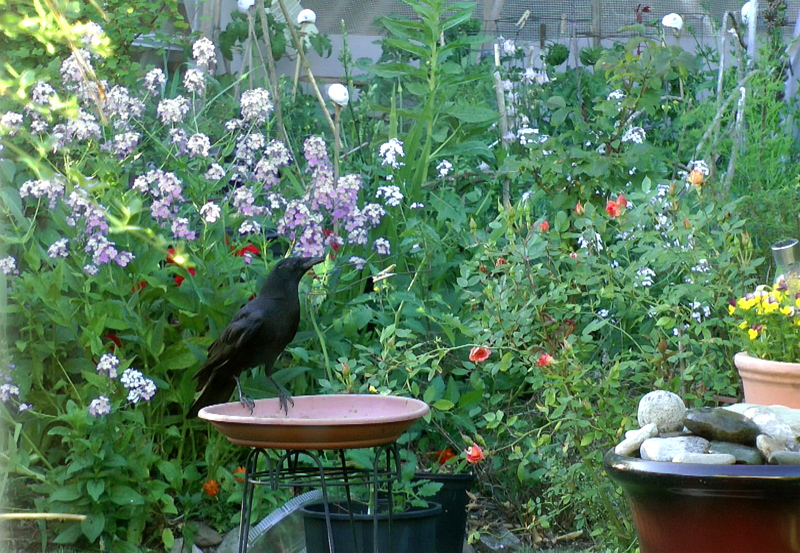 A few warblers who arrive in the spring to go through the unfurling leaves on trees and shrubs to find any grubs to feed to their young. And bathe, of course! 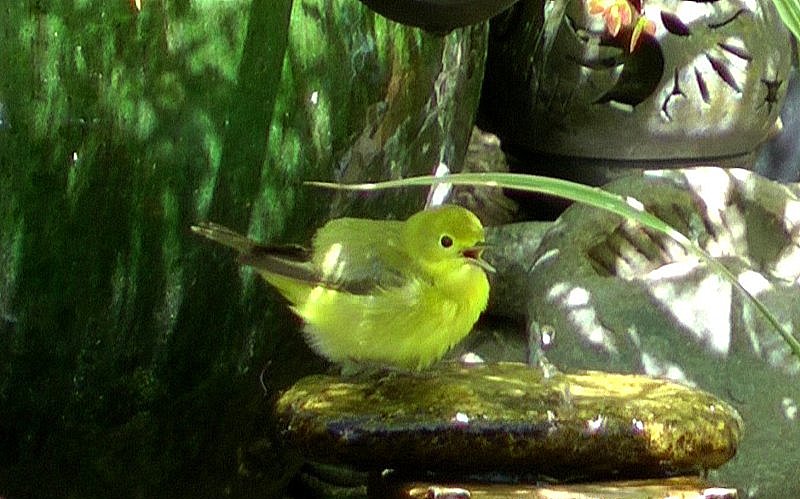 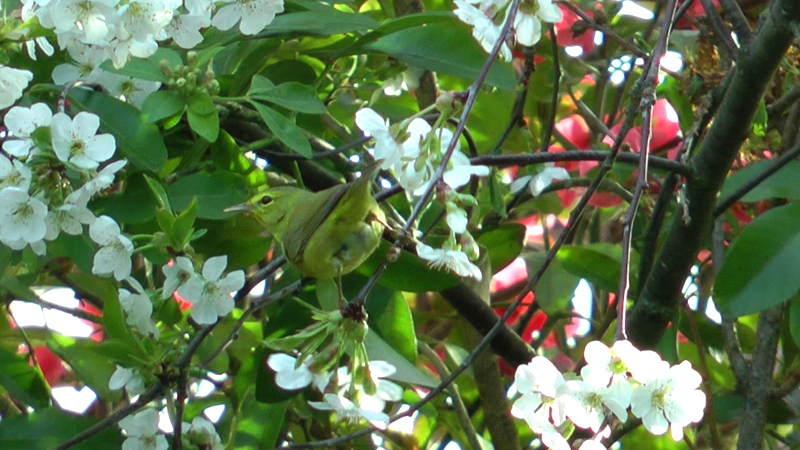 The Hawthorn is very popular with the warblers for grubs and other birds for the shelter of the dense branches. 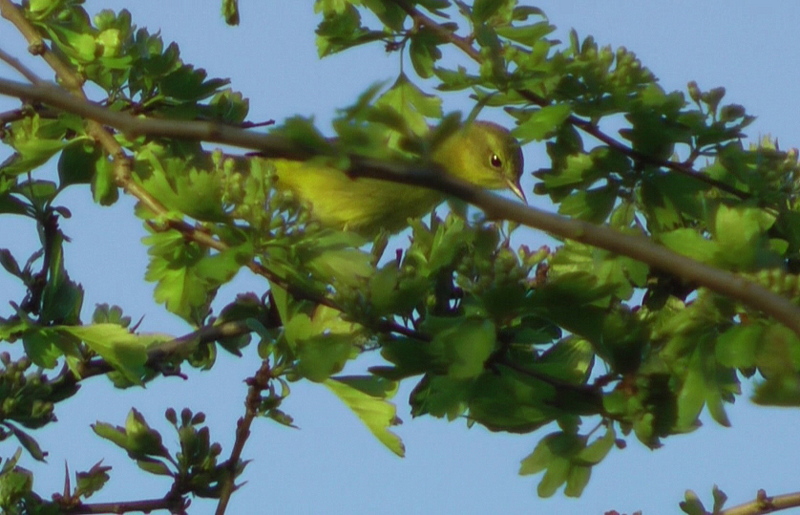 The Wilson's warbler almost hovering as it reaches for a grub. 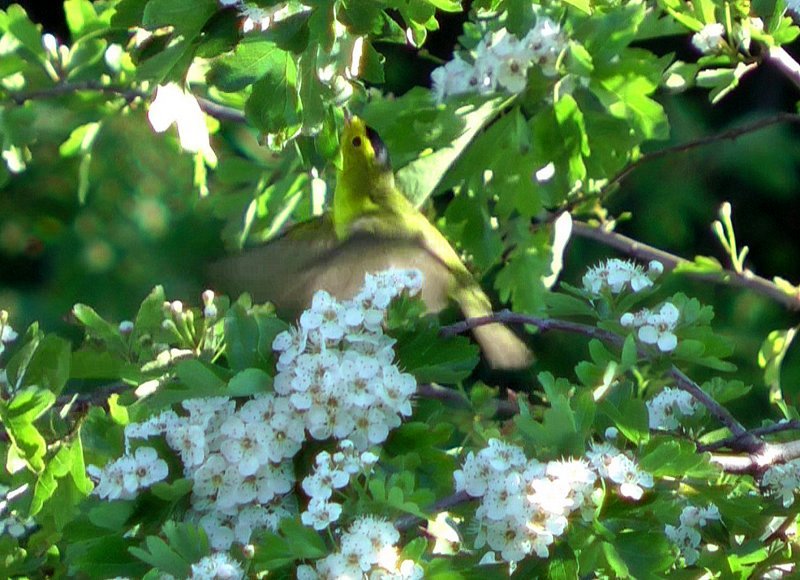 With climate change shifting seasons a bit birds like the warblers may arrive after the grub season and not have enough to feed their young. Good timing this year! 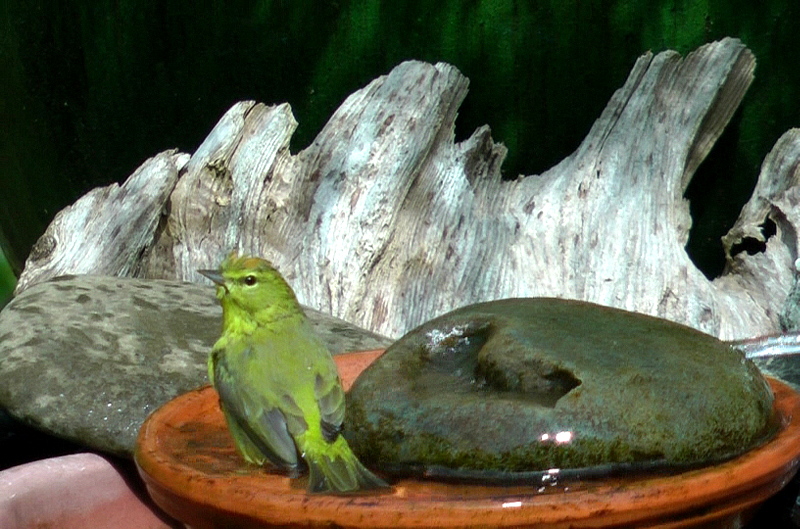 Mama warbler taking her fledglings to the lawn for a dew bath in the morning. 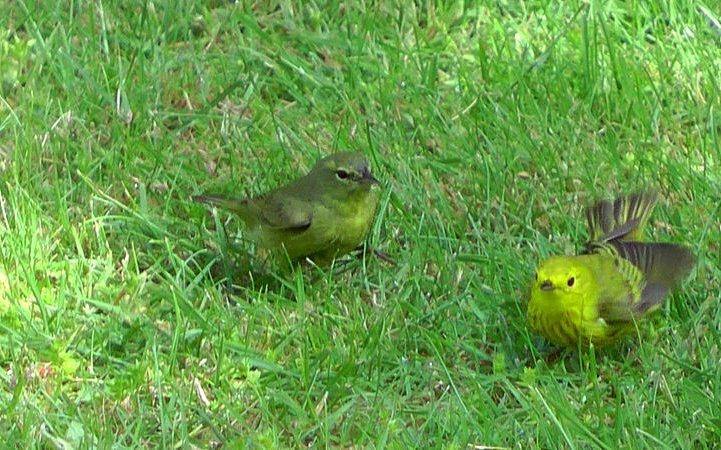 This Spotted Towhee is scrounging around the yard incessantly now looking for bugs to feed to the two young hatchlings I hear in the hedge. 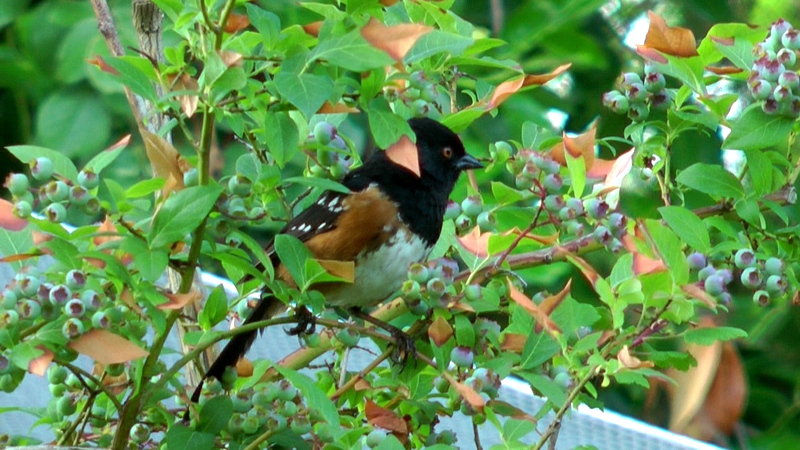 When I had to have a tree cut down I asked to have it left tall. This so that birds could sit on top but I never imagined the hawk would use it, too! When Hawk arrives it is as silent as if there had never been a small bird in the yard; they all hide in the hedges. 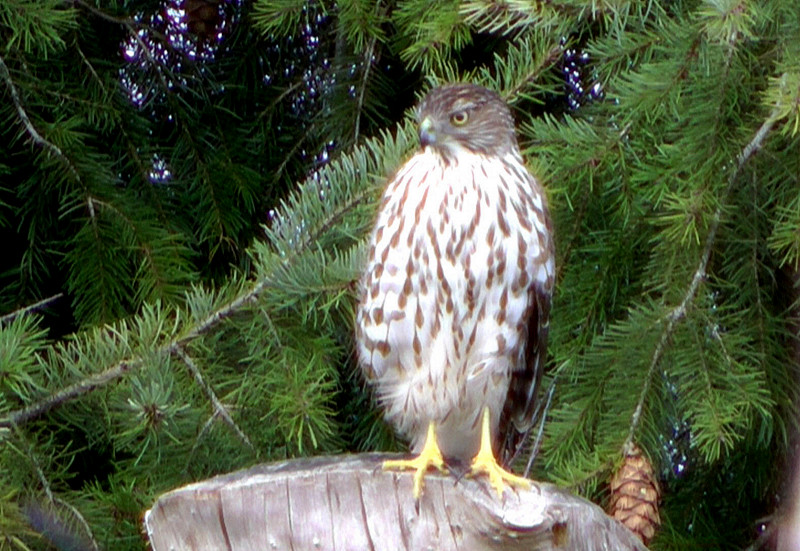 There are a few larger birds that frequent the neighbourhood but fewer than used to be due to cutting of forests and building more houses.
The Orange Shafted Flicker. 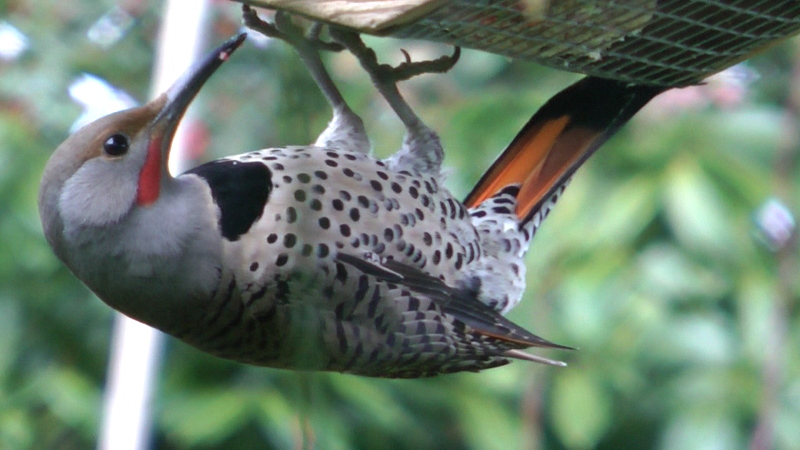 The Pileated woodpecker also comes for the suet I put out in the cold of winter. Saw none in the yard this year. 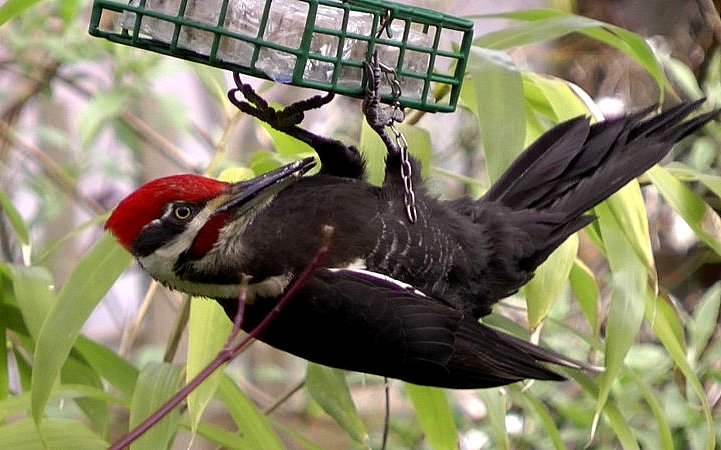 Out in the woods. 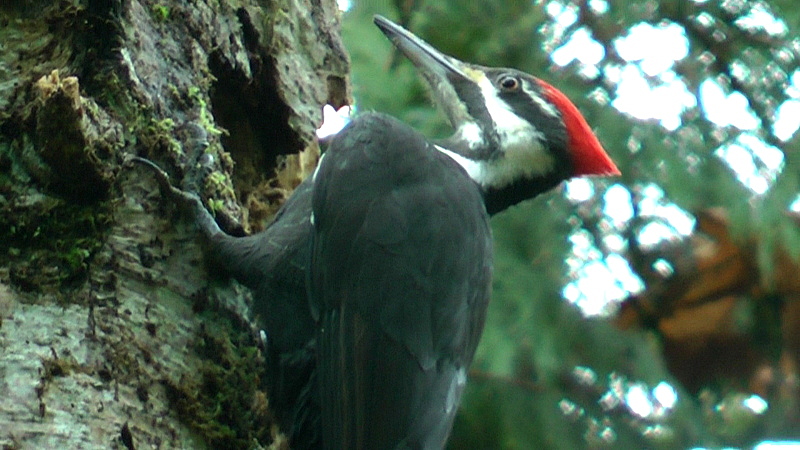 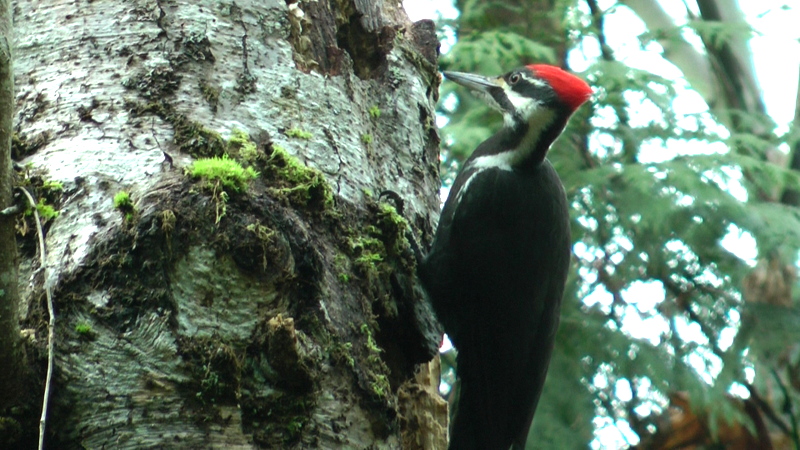 I think this is a youngster, a barred owl. Such yellow eyes! 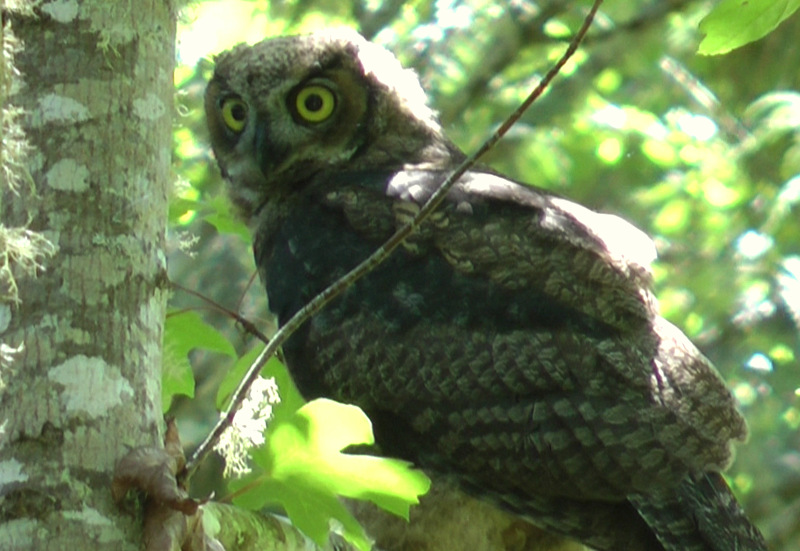 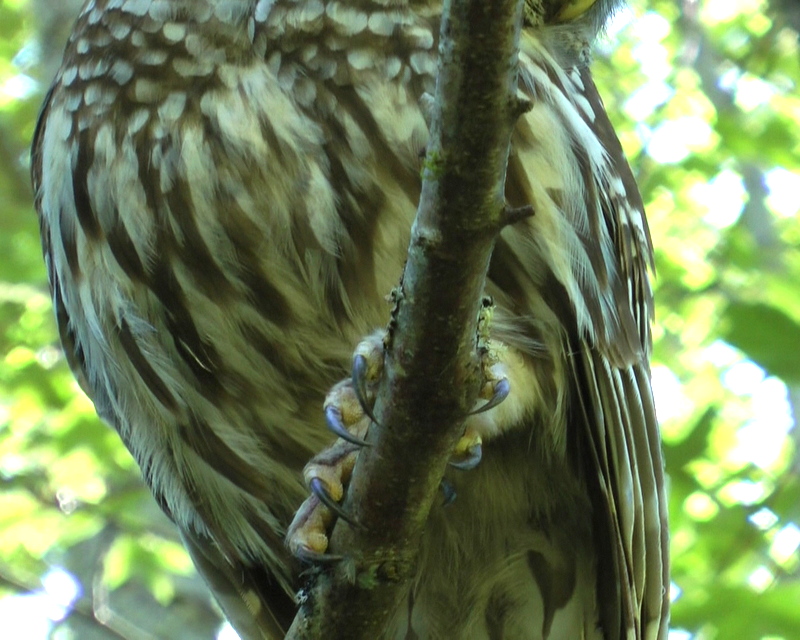 Looking at Roland the Chihuahua. 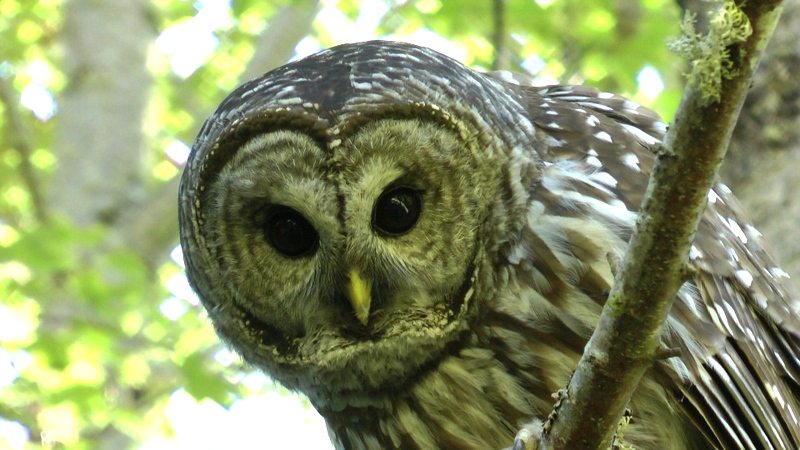 One day I spied some feathers about 20 ft downhill into a ravine on a construction I have wondered about. It looks like it may have been a bridge over the ravine and stream at one time. So, of course, down I go. 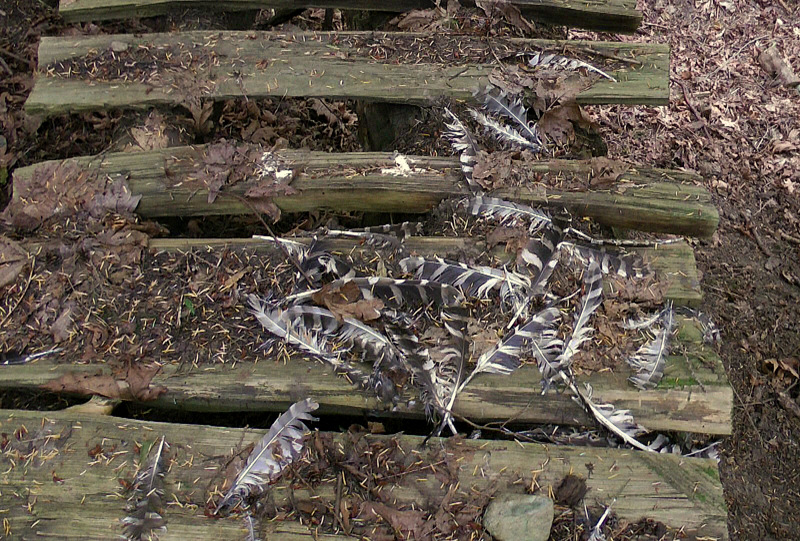 The feathers are at the bottom of the pic. Someone suggested this may have been a mountain biking structure. 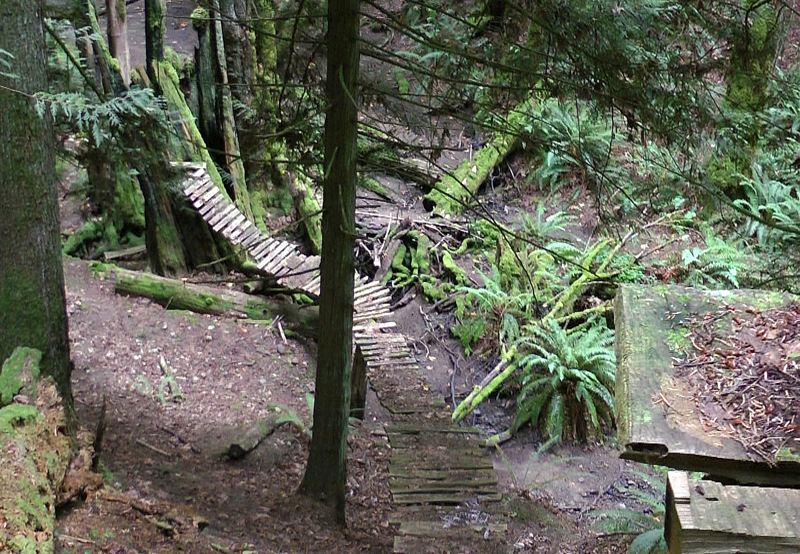 Those were Barred Owl feathers. A 1st Nations person thanked me for the gift of a few of the few I took.

Out on the estuary at high tide in winter. 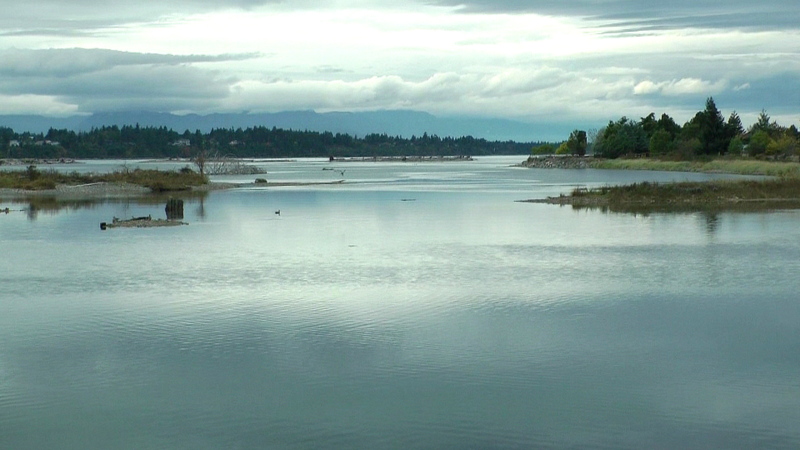 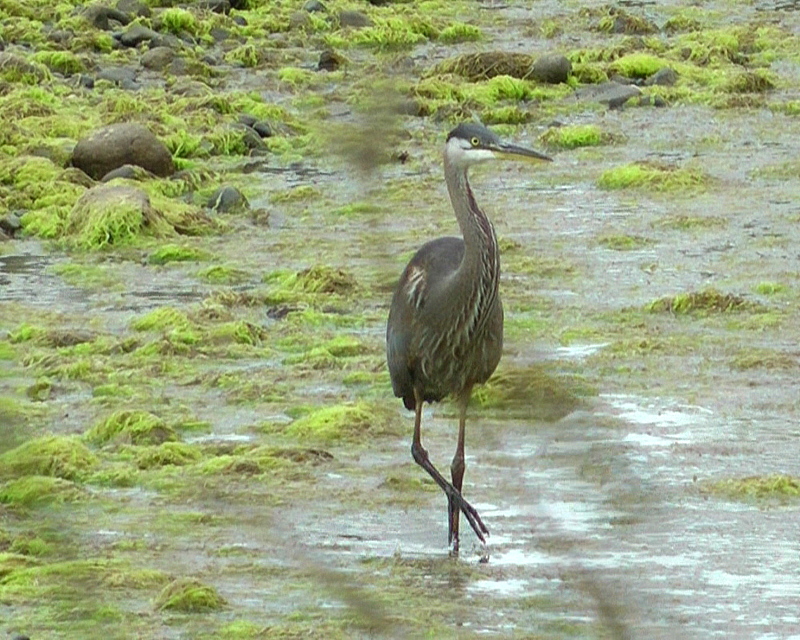 Young eagles at a distance. 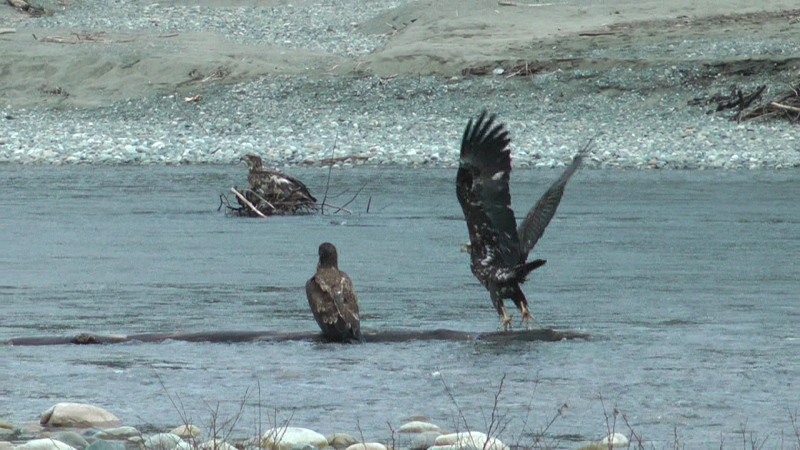 Another youngster watches the river. 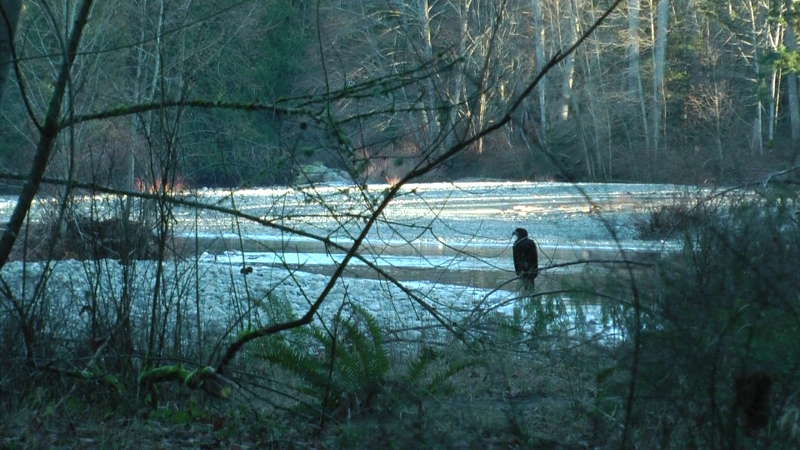 One winter's day while walking along a river bank we smelled awful rotting smells with nothing in sight to cause such a stink until we looked up into the trees where we could see discarded leftovers from eagle dinners. The salmon were running up river to spawn. 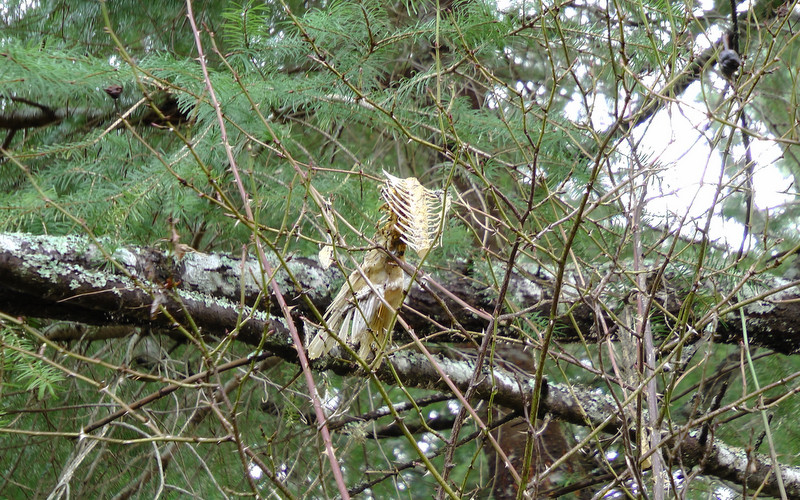 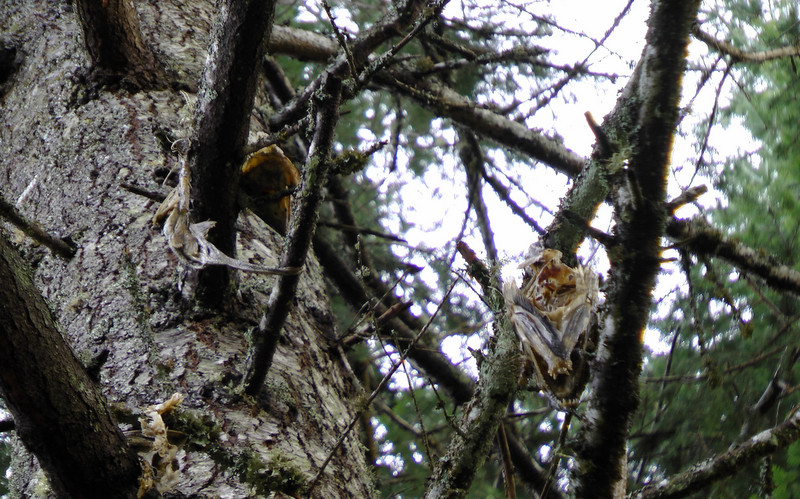 This one was up a tree in the park one day, like a sitting duck for the camera! 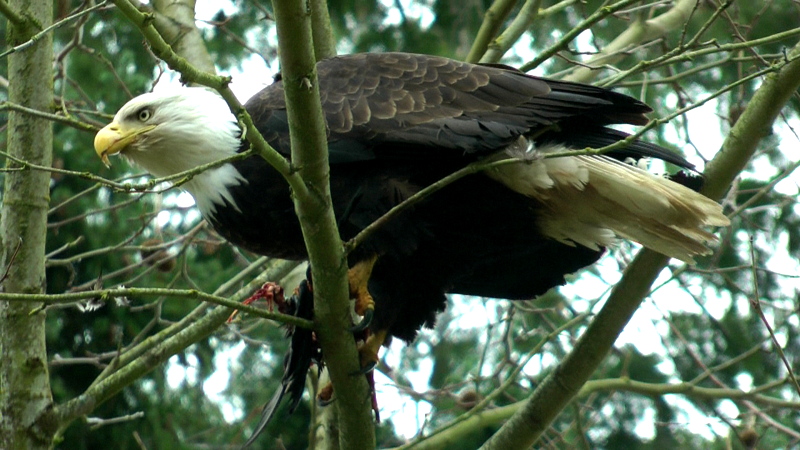 Eating a crow, I think. Sometimes eagle eyes are blue, sometimes yellow. Is it an age thing? 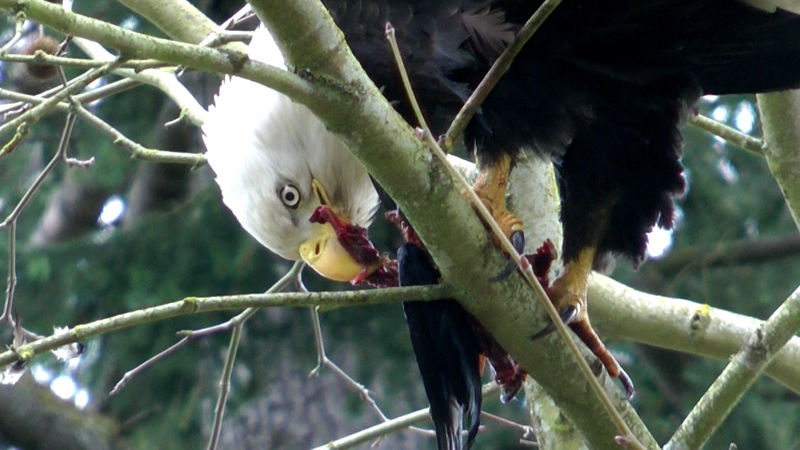 At the beach one day I was a little upset when a couple of people started walking toward this eagle on the beach. It flew up, they tossed it a whole salmon and walked away. Wonderful! I think maybe a released rescue. 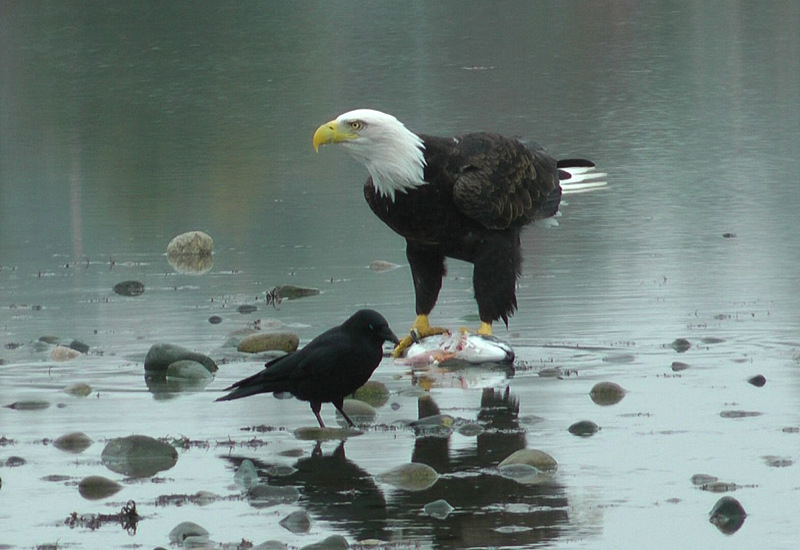 Otherwise, watching eagles and owls is usually, well, boring! All they do is sit and blink. I do like looking up from the garden to see eagles circling overhead, sometimes as many as seven. There is an eagle tree nearby. They are protected here and not allowed to be cut down.
If I really wanted to see a lot of eagles I would go to a big fish run where they do annual eagle counts or to the dump where eagles catch seagulls and tear out their hearts to eat leaving the rest of the body behind.
8

WARNING!
This one is not for the sqeamish.
Owl eats snake. YUCK!!!

So beautiful and different to what we see Down Under!
0
Top

You sure do see some amazing birds there. You must spend so time bird watching. Your pictures are just gorgeous. Thank you so much for sharing these beautiful creatures.
0
Grow Something!
~ Patti ~
Top

I just can’t take wonderful bird photos. Yours are fabulous. Do you use a special camera?
0
"When we kill off the natural enemies of a pest we inherit their work."
Carl Huffaker
Top


Yea, that’s a Barred owl from Eastern North America. They found a way west across the Great Plains in Canada and now are populating the Pacific Northwest and BC. They are rapidly displacing the indigenous Northern Spotted Owls there. The US fish and wildlife service has a program that is hunting and killing the Barred Owls. A few thousands have been killed so far, don’t know if the effort has been suspended with the virus.

It’s very controversial, killing the Barred owls since they haven’t done anything wrong, and overall the effort is likely only buying time for the Northern Spotted Owl.

Our birds up here are more the sort that blend in with their surroundings. No pink flamingoes or beautifully painted buntings. No musical tones like the Australian magpie, I always know an Australian movie from that sound, or New Zealand's marvelous Kokako.
I have seen an Oriole, Cardinal and heard the Whip Poor Will when I lived in Ontario as a child. It would be lovely to see bird pictures from other places.
And yes, birds from other places are arriving here as invasives but what are they to do? Those darned English sparrows didn't ask to be brought over here any more than the Asian ring necked doves did. Like the changing trees and plants due to global warming, they are here now and for most of it the rest just have to cope. It is sad to see the gold crown and white crowned sparrows displaced but there still seems to be a niche for them.

My camera is a camcorder that will also take stills. As well I can take still clips out of movies from the Panasonic which has a manual focus or I'd never get hummingbird shots. I bought the camera a few years after I retired to replace another one I had. The Panasonic has been great, expensive and worth it. I think some phone cameras are really good these days, too. Things are always changing.

It is so drab here in winter for such along time, raining again today, that I really enjoy seeing my pictures rotate on screen.
I also enjoy seeing the pictures others take of what is around them be it nature or man made.
We are part of it all , too.
0
Top

You might find this link interesting.
It is called the owl pages.
Been looking at it for years.
https://www.google.com/url?sa=t&rct=j&q ... oqpHJ9Me5d
1

Last year I posted a picture of a raven.
Here it is again with a bird messing with it.
The little bird is up on the left.

Funny how the big birds are always followed and messed with by a smaller bird. One tell for owls in the woods is to listen for any commotion. Owls are dive-bombed and screamed at by robins and other small birds when the owls try to rest in the day time.
0
Top

Worth, do you get many owls where you live?
I have seen or heard one Snowy, several Barred, heard a Barn owl and crouched next to a Great Horned owl that had crashed into a large 2nd storey window at work one night. I was hoping I wouldn't have to take the huge owl in for help even with really tough gauntlets I happened to have in the car trunk. After a few moments it silently lifted off and flew away to my great relief!
0
Top

I get all manner of Owls where I live one flew in front of me this morning on my street.
One time on the river fishing I hear an owl popping her beak in the trees.
Then I saw a baby owl in the briars below the tree.
I got a stick and managed to get the baby out an put in a clearing and backed of.
The mama was popping all during this.
I backed away and the mama flew down next to the baby hooted at me and took the baby back to the nest.
It could have been the father too as far as I know.
My next door neighbor who was an African veterinarian from Kenya was flabbergasted at my relationship with animals.
He brought a snake on a stick to my yard to see.
The snake crawled onto my hand and stuck it's tongue out at him.

Then I let the snake crawl into a tree and that was the end of that.
It was a gopher snake.
1

Coastal, your photos are a feast for the eyes.
0
Donna, zone 9, El Lago, Texas
Top

Awesome. I don't know how you managed to get such great bald eagle pictures (let alone all the other birds). Great job!

I'll have to see what birds I can find for you. I've got audio of blackbirds singing, on my computer.
1

Shule, it is most often sheer luck that is responsible for good catches like the eagle. I was out at the beach with my grand daughter one Saturday morning and there it was. The trick is to always have your camera handy.

The small birds are all yardbirds. They visit because of the fountain and the hedges where they can shelter and scratch for insects in the mulch as well as find nesting materials. I don't have to go anywhere to see them; the little ones come to me and sometimes hawks though on some days I can look up and watch several eagles circling upward on the thermal currents in the air.
There is a Berwick's Wren fledgling hiding in the hedge lately with mom flying about the neighbourhood looking for food, calling out her song which is varied and interesting. I haven't managed to get a photo of that one but here's a sparrow being fed that I got yesterday. 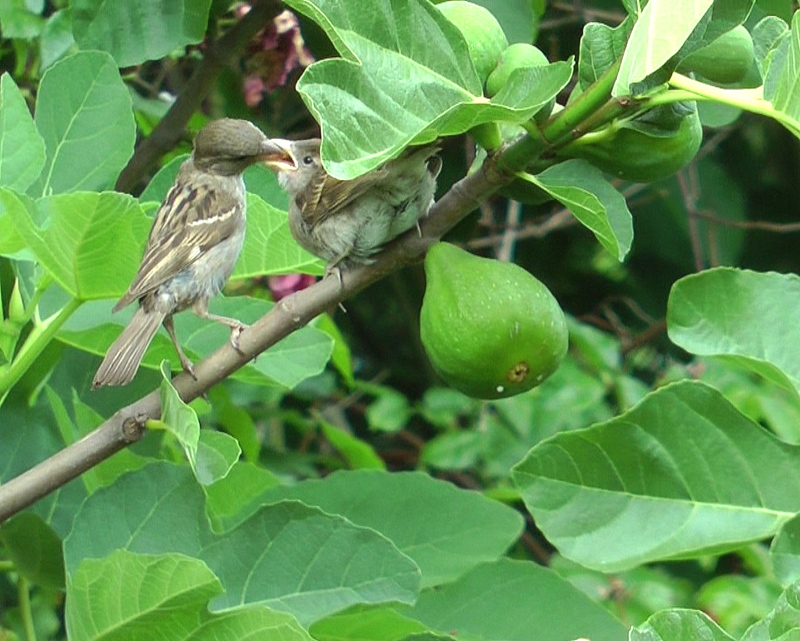 I am also keeping my fingers crossed that the wren doesn't go after the figs as another wren did one year. It stripped the skin off the figs randomly, a bit here and there.
2

Return to “The Gallery”