I went easy tonight, smash burgers and home fries. This never gets old!!!

I am very glad I kept up my Misfit Market subscription, I get a box of fresh veggies and fruit each week that I want it. There is now a wait list to start getting the boxes because they couldn't keep up with requests for new subscriptions. Some times things work out. I am glad you got some MissS.
2

I finally made something for dinner, since I didn't do much outside today (the wind was blowing like crazy!). I did harvest that red mizuna, which I used in place of the spinach in a delicious sounding soup in Milk Street's new Instant Pot cookbook - Persian Barley Lentil Soup with Spinach. Simple and delicious. After the initial sauté of the onion, carrots, garlic, and tomato paste, the barley, lentils, seasonings, and chicken broth were pressure cooked 15 min, pressure released quickly, then the cilantro and greens were added, and simmered a few min. 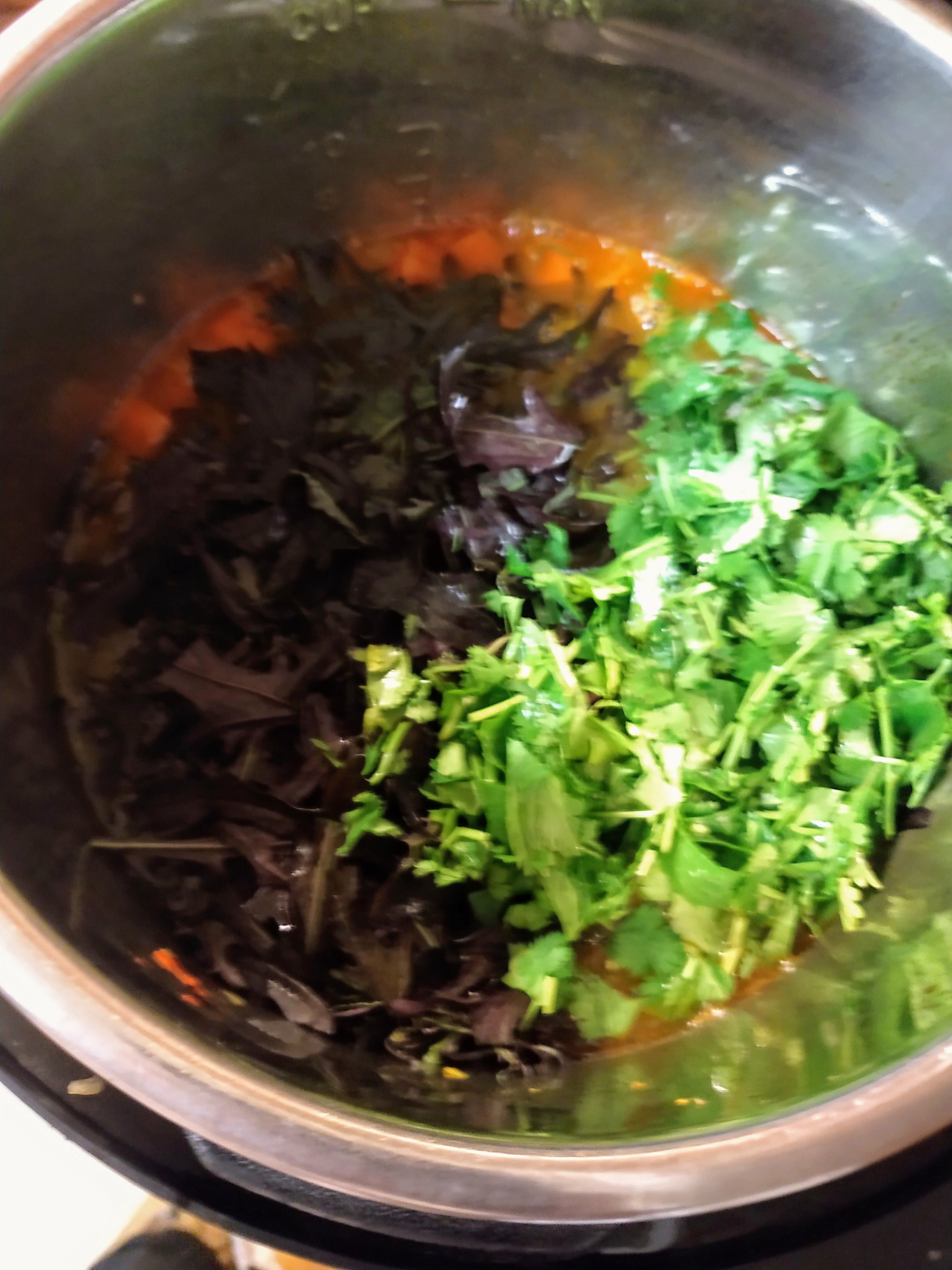 Adding the cilantro and mizuna to the soup. by pepperhead212, on Flickr 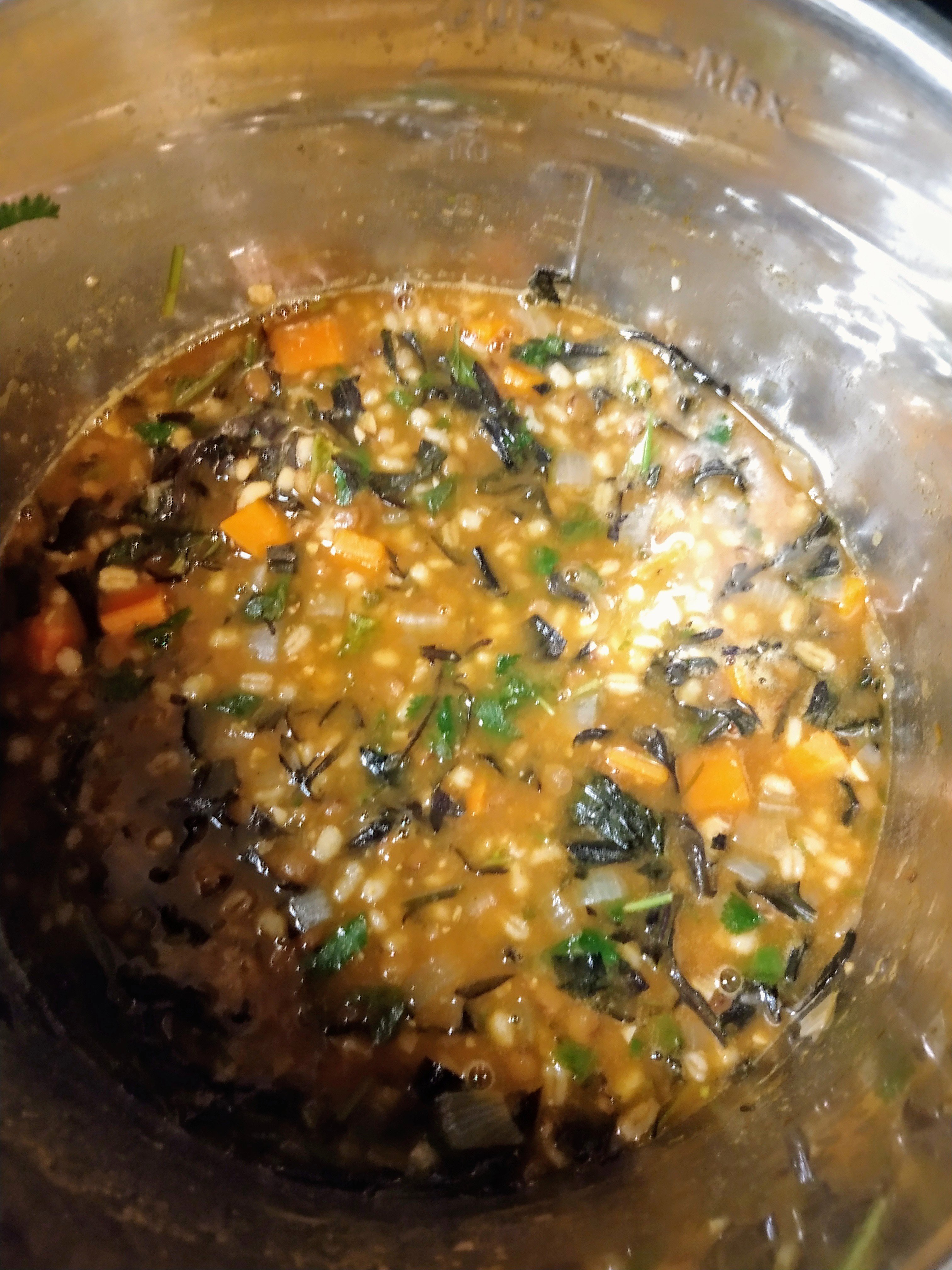 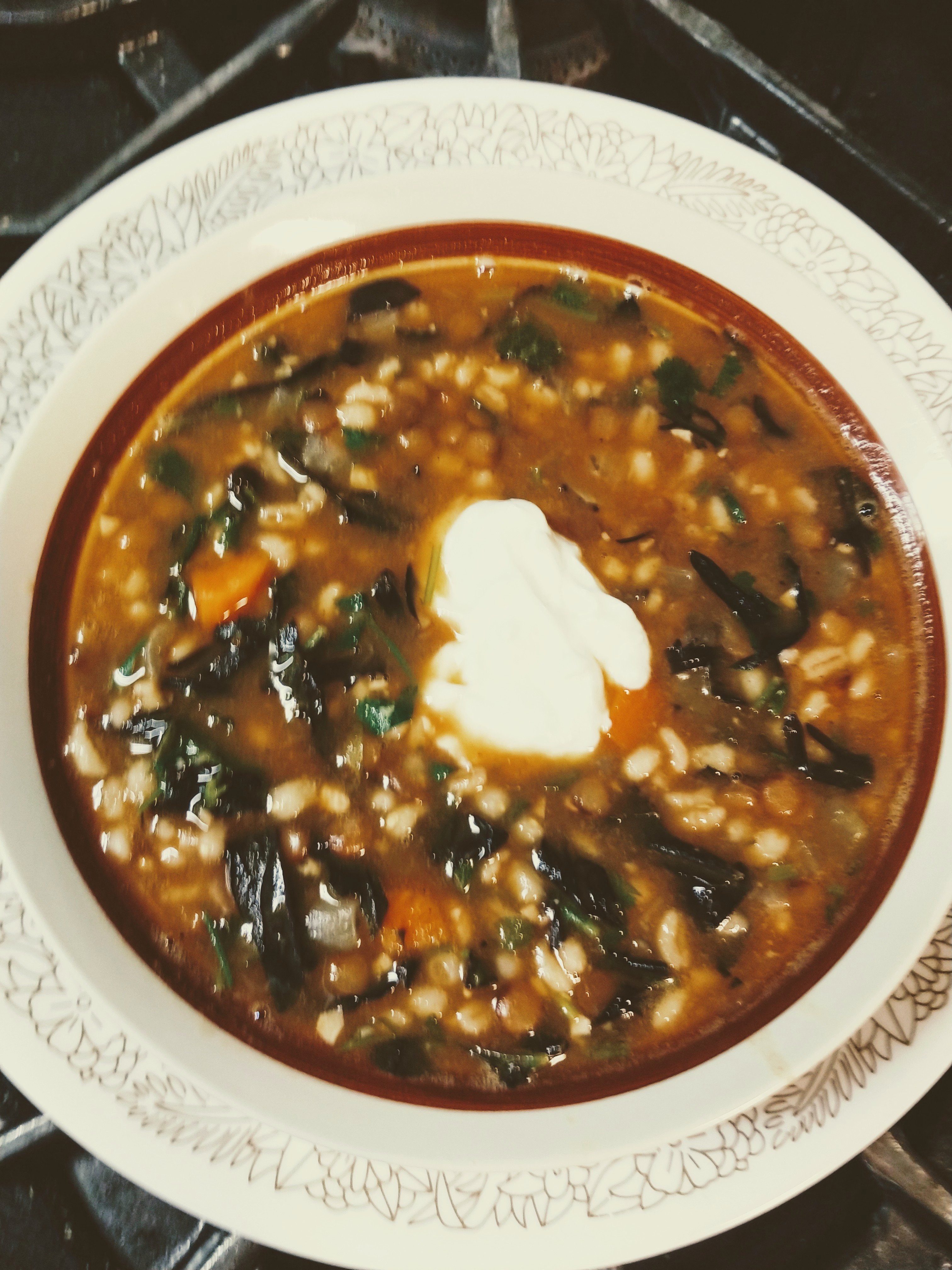 Persian Barley Lentil soup, with a dollop of yogurt, for serving. by pepperhead212, on Flickr
3

I started picking some fresh things finally so tonight I made a chicken and asparagus dish with a white wine sauce and a side of Uncle Ben's Coconut Jasmine rice. We also had spinach and leaf lettuce salads with a PA Dutch specialty, hot bacon dressing, that I buy once a year. 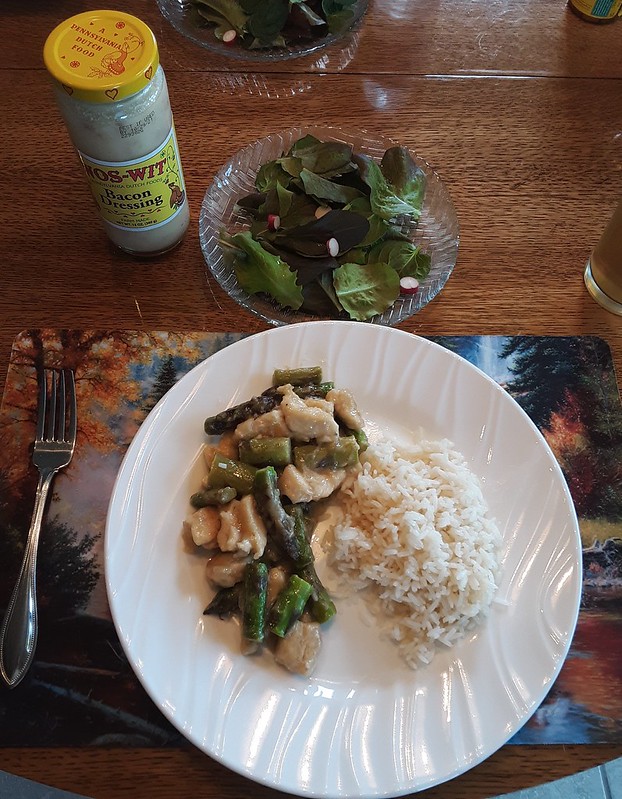 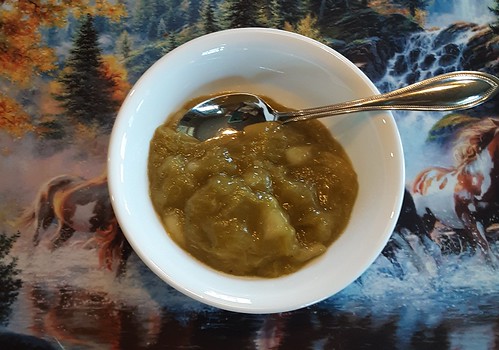 Second time around making homemade bacon. 1st time around got rave reviews, but i tweaked the recipe this time to get a little more smoke on it. Not a difficult process, just needs some time in the fridge to cure, although, i forgo the curing type pink salt.
3

A few months ago I found a dynamite recipe for Chinese char sui, one of my favorites and it's just as good as the local Chinese restaurant's. Since I had cut up a pork butt into a lot of pork "fingers" for the freezer, I used some of them for char sui for lunch. 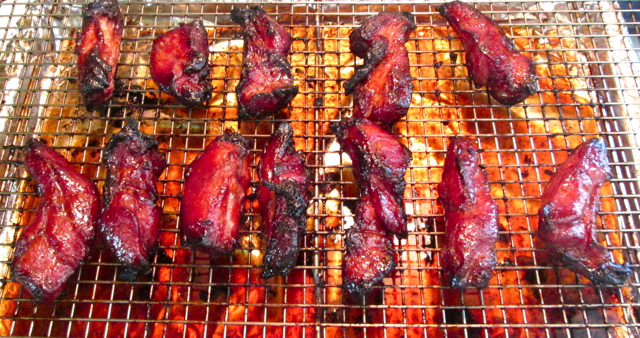 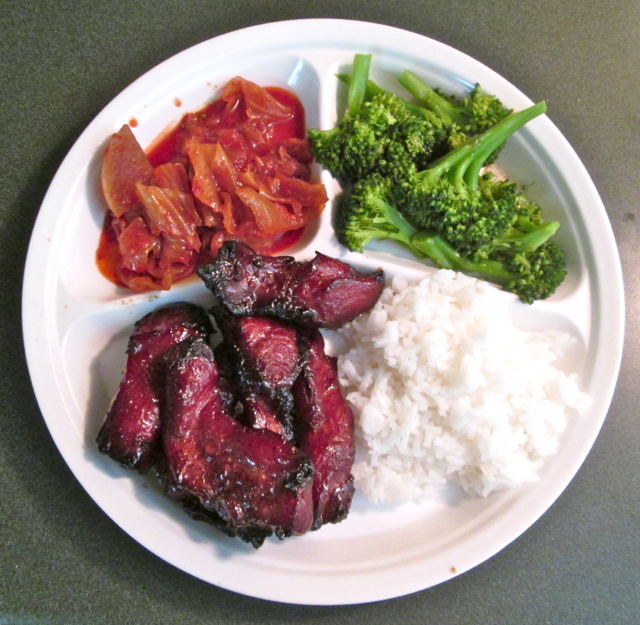 Oh, and homemade fudgecicles made from homemade chocolate pudding for dessert.

I'm going to try making these fudgies out of sugar free Jello chocolate pudding mix to see how they compare and do a cost analysis.
4

Chili Rellenos with green rice. I haven't made this in a while, and I really enjoyed it.

Tonight, I made up a dish using the Instant Pot, with some dried tomatoes and eggplants - approximately 3 lbs worth of tomatoes, and 2 lbs worth of eggplants. I toasted the tomatoes briefly in a dry skillet, then soaked in hot water until soft; the eggplants were soaked in hot water until I finished all of the preps, and it was still sort of hard, but it was to be pressure cooked, so no problem. The tomatoes were blended to just 5 cups, so it was thick. I cooked some onions, garlic, and bell peppers, and set them aside, then added some spelt, barley, thyme, and chopped parsley and basil (half of the large amount of basil, leftover from the cuttings), plus the eggplant and some more water, and set the IP to 15 min to pressure cook. When done, I released the pressure, stirred in about 1/2 c toor dal, and re-set it to pressure cook 10 more minutes. When the pressure was released naturally, I stirred the onions, garlic, and peppers back into it, along with the second half of the basil, and that was it! 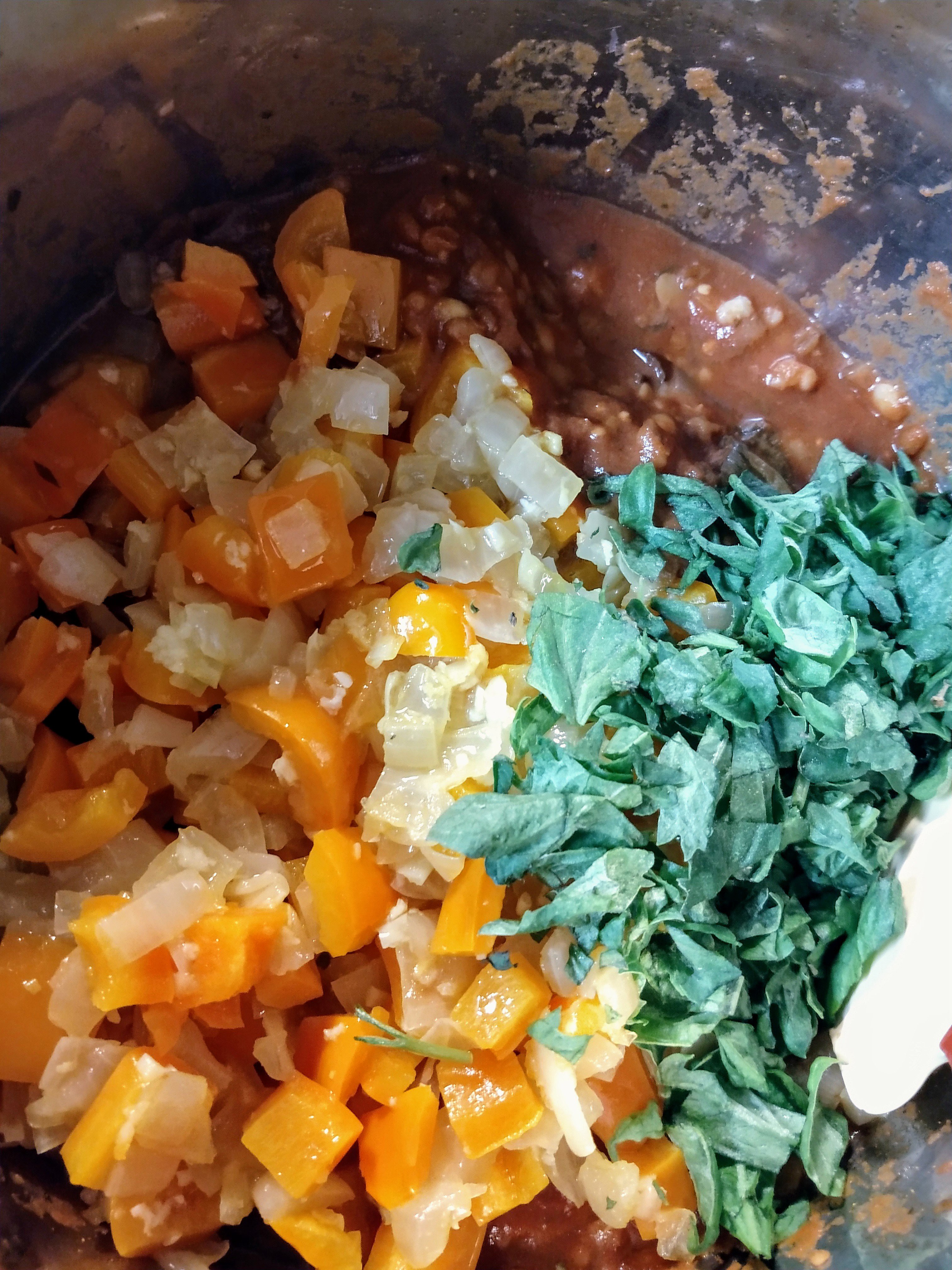 Cooked peppers, onions, and garlic, added after the pressure cooking. by pepperhead212, on Flickr 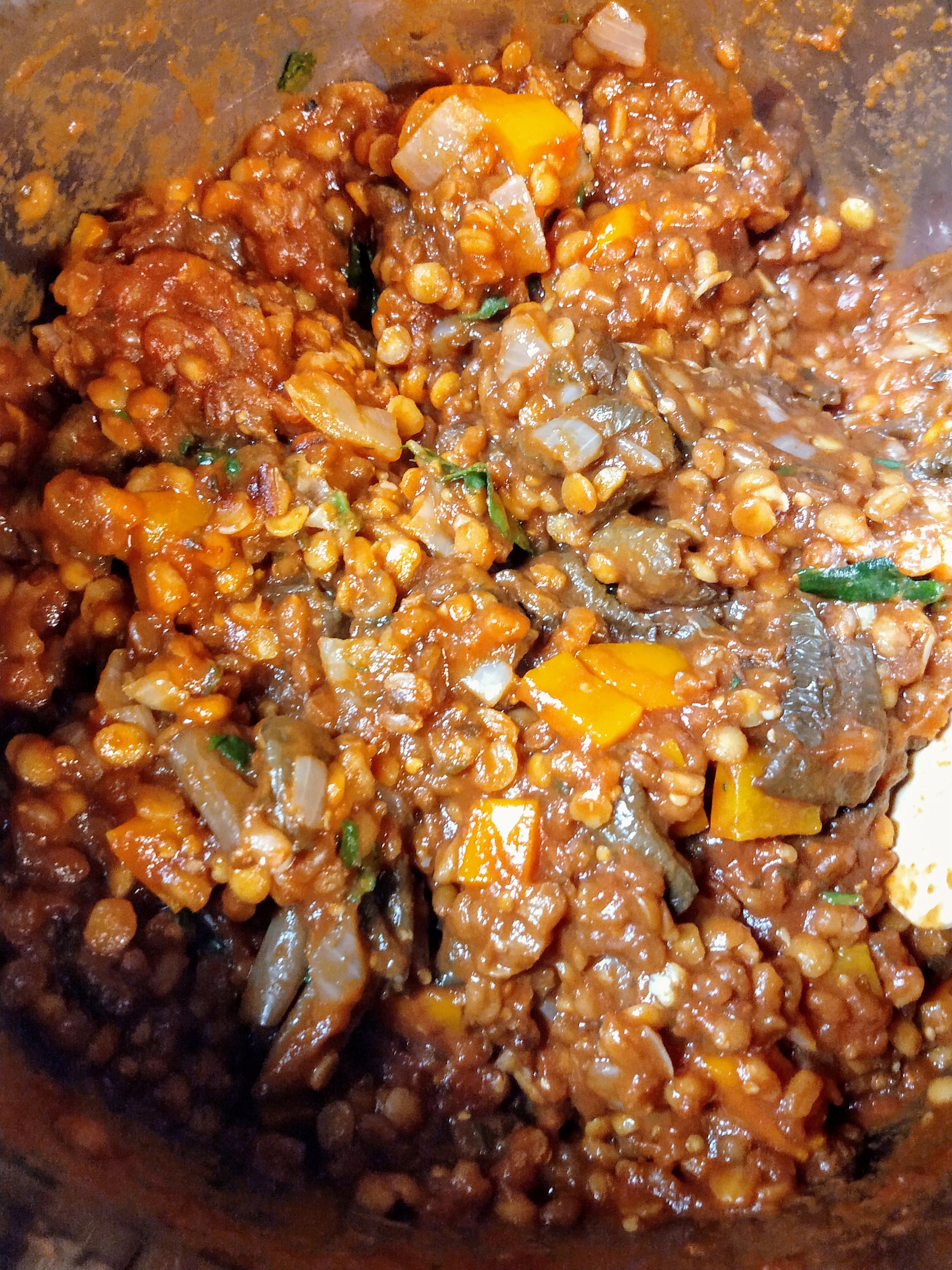 Finished dish, made with dried tomatoes and eggplants. by pepperhead212, on Flickr 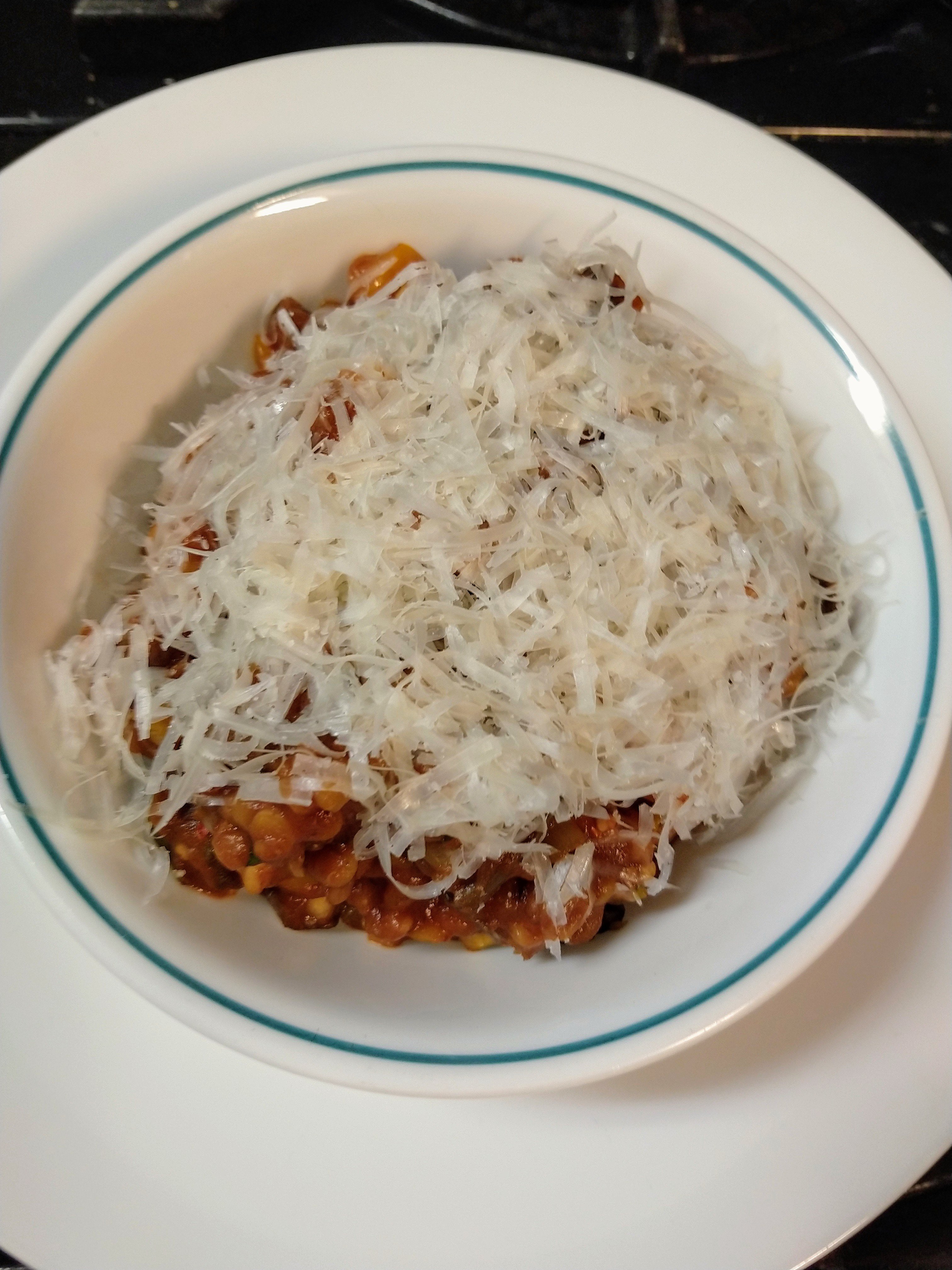 Dish served with some grated pecorino. by pepperhead212, on Flickr
4

Black bean burgers on toast tonight with my version of succotash as a side. I saute onions and orange peppers since I was out of red, corn and lima beans in real butter and then sprinkle with fresh parsley after cooking. 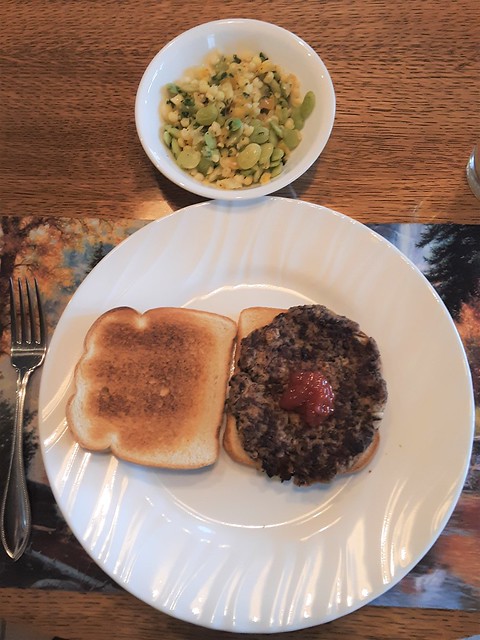 It's Cinco de Mayo!
Guacamole! I haven't been shopping much lately, but about 10 days ago I went to Aldi's, because they had avocados for 59¢ each, and I had to get some, along with cilantro, and a few other things (I stocked up on corn tortillas, two packs in the freezer now). I thawed some of last season's tomatoes and peppers, and harvested some chives and garlic chives - I like these better than raw onion, since they keep better, and there is less aftertaste, that raw onion results in. 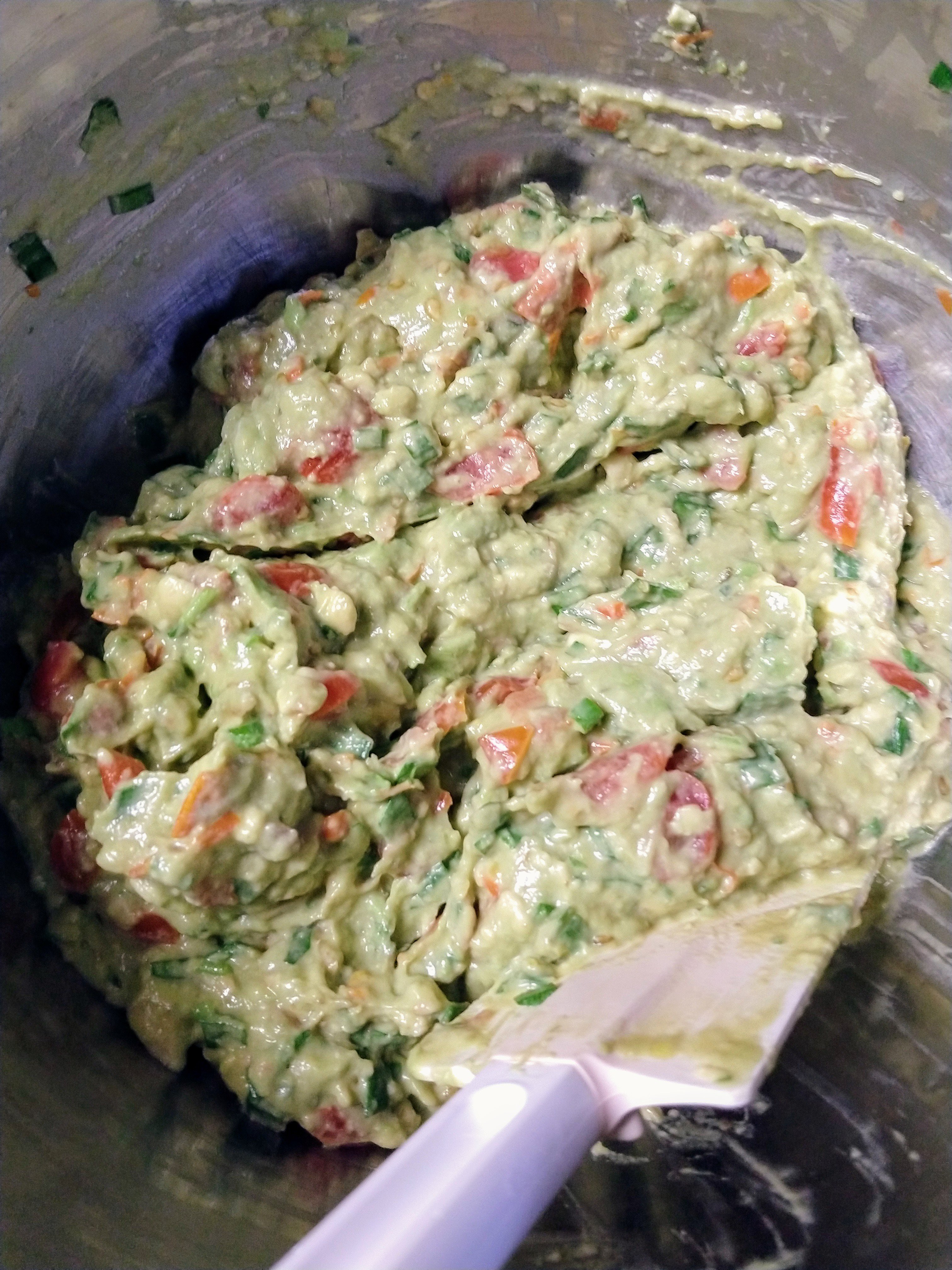 Guacamole, on Cinco de Mayo. by pepperhead212, on Flickr

And, of course, something using Tequila!

I also had some frozen mole sauce, so I thawed some of that, as well as frozen, cooked turkey, and I made a few tacos with that. And I didn't have any crema, so I used something that I've seen Bayless use in place of sour cream or crema - Greek yogurt. And it was surprisingly good!
3 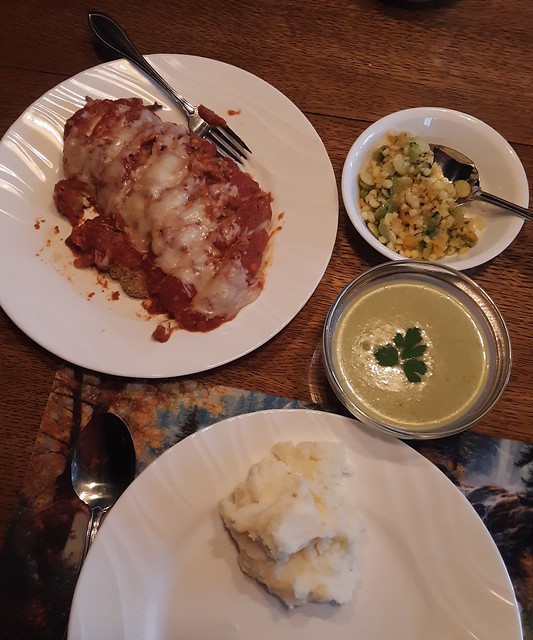 Cherokee Purple fresh from the garden sliced and salted. About to go on toasted sourdough bread and three thick slices of homemade bacon. Gosh, that was good.

I just ate the innards from a red jalapeno pepper.
BIG mistake.
The other ones weren't that hot.

So, what was the mistake?

i made a big pot of senate bean soup.
also made a couple loaves of english muffin bread.
the bread i have been doing something different with.
seems there is a shortage of yeast in stores. everyone is home
baking bread. we have plenty here at home. i dusted off the bread
alone book, and learned how to make a chef, and keep it going.
rising takes a longer time using this method. i have been adding
1/8 tsp yeast to the dough mix, and have been getting a decent rise
after six hours or so. i like how the bread has been coming out.
taste, and texture is a bit different from the usual method. we like it.

today, we have some local source filet mignon, in the fridge for dinner.
cook 2 minutes in cast iron skillet on the stove, then 10 minutes/inch
thickness in oven at 400. adjust for your preferred level of doneness.
you will have a nice medium rare filet. yum.

Sounds like a wonderful meal @rxkeith Our stores have no yeast either BUT I discovered that one of my small local stores that has an in-store bakery packages yeast in those plastic clamshell packages and sells it like a bulk food. I got the equivalent of 3-4 small packs for $1.97
1

So, what was the mistake?

I was cleaning them and decided to eat the part the seeds grow on to see how hot they were.
I didn't eat the seed just what they grow off of.
I hadn't had anything to eat all day until I ate that.
My mouth burned like fire for almost an hour.
It wouldn't go away.

If you see one of those red/purple Japanese sweet potatoes with the white flesh and have never had one try them they are amazing.
0
Worth
Paul Prudhomme Is The Head Chef In Heaven
Top

I decided to make my world famous ground chuck chili because it has been pouring down rain all day on and off.
2 pounds of ground chuck.
1 big giant handful of Fiesta brand light chili powder.
Tablespoon of cumin maybe more.
1/2 teaspoon salt.
1 tablespoon powdered garlic.
1 tablespoon hot smoked Spanish paprika.
1 teaspoon oregano.
The meat was made into little ball chunk like things.
The spices on top of that .
The small burner put on medium low and a lid put on.
Never done the last steps like this before but we shall see.
I will add some HEB brand vegetable juice (store brand V/8) and maybe water in due time.
3