Pizza with tomatoes and fresh basil from the garden, cooked on the grill. 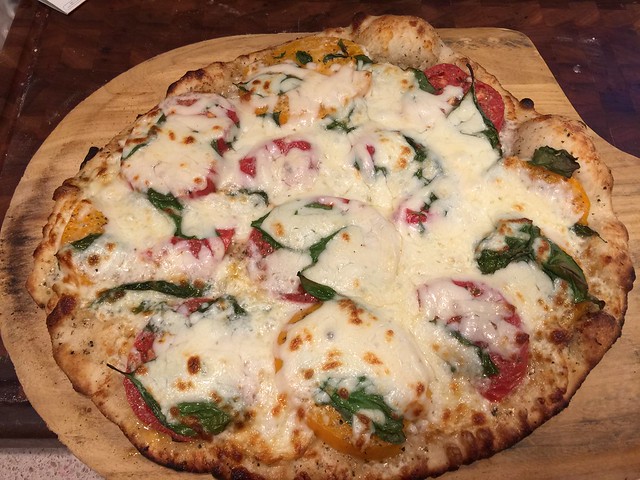 Looks good! What is your grill setup? Pizza stone on a gas grill?

We made a couple of pizzas and roasted broccoli & sweet potatoes. I love my outdoor kitchen which consists of two Weber gas grills with pizza stones.
0
Top

I made fajitas in a cast iron pan on the Weber Gas Grill. 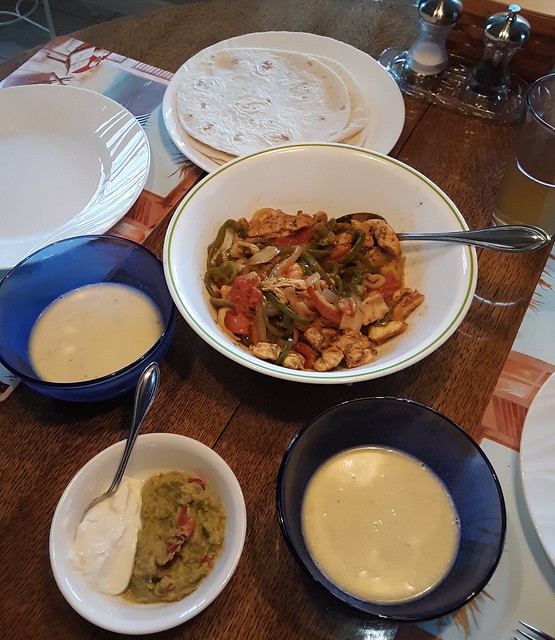 Bought one yesterday and separated the muscles in accordance to grain direction
The one on the lower left is for a cured dried and smoked mini roll.
Middle upper for carnitas or pork chili.
The rest steaks and schnitzel.

Decided to make a dry salami with the carnita scraps.
Just used a knife no need for grinding.
Mini roll on bottom.

Brisket and Beef ribs. Long time since I did either. Post Oak chunks for the smoke, the wood of choice for most central Texas Barbecue cooks when doing brisket or beef ribs. No one I know in Texas uses Mesquite for anything other than fast and hot grilling, never low and slow. Goode Company Barbecue might have used mesquite for their low and slow, but I wasn’t a big fan of their brisket. Great is Goode Company for Seafood, Mexican, burgers, etc., their Barbecue was their weak point, IMHO.
0
Zone 9a/b, right on the line, in the heart of the Columbia bottomlands. Heat zone 9, Sunset Zone 28, annual rainfall 52”
Top

@karstopography
I do BBQ with mesquite but not low and slow.
Low and slow to me and any purist is what I/we call hot smoking.
I may seem as an annoyance but it is the truth.
The old time BBQ's in Texas were over an open pit not in an offset smoker.
Due to this I think the mesquite BBQ got lost in translation and somehow it ended up in the offset smoker.
A little is okay but too much is bitter.
Another great hot coal wood is white cedar or ash juniper believe it or not.
No smoke just a really hot bed of coals.
If done correctly it is like a rosemary flavor.
As for what I am cooking today it is pork schnitzel AKA chicken fried pork and twice baked potatoes with cream style corn and green beans with my pancetta cooked in it.
0
Worth
Paul Prudhomme Is The Head Chef In Heaven
Top

Everything's ready but me.
Cooked up the chicken fried pork.
Cooked the green beans and added my leftover blackeyed peas to them.
Change my mind on the baked potato after I baked two smaller one.
Took out the insides and mixed them with the cream style corm, flour, jack cheese, baking powder and an egg.
Mixed all that up and put it in the oven.
Sort of a corn pudding thing from the south.
Fried the left over potato skins and potato stuck to them in the hot oil.'
Made gravy.
Corn stuff top picture.

Hung the salami up in the kitchen all day and night.
About 71 degrees F.
Here's the color now.
I used some of my ghost pepper fermentation starter and some Madeira wine in the mix along with salt corn starch some sugar paprika black pepper and insta cure #2.
Not really going to dry this stuff but cold smoke it.
Probably should have put this in the smoking curing section.

Got the smoker running at 150F.
When the temperature of the salami gets close to this it's taking a cold shower.
Mostly heat very little smoke at all.
Sometimes not any that you can see.
I'm using mesquite lump charcoal (not wood) in a tiny little bed of coals.

What are the red things on top of the muffins?
0
Top

corn... just corn. 12 dzn ears and more to go. all bird damaged in the corn field. grrr. I hate starlings...dead! I wish them all dead!
2

Plus the salami was taken out of the smoker at around 142F and is cooling.
Mini meat roll has been out awhile now.
0
Worth
Paul Prudhomme Is The Head Chef In Heaven
Top

Went to the farm yesterday and pulled a little garlic, and since I was exhausted I invited my friend to come over and cook me dinner. She agreed!

I had fun with her 3 year old daughter pulling some carrots and picking some peas in the garden. New potatoes the little girl picked as well, off some volunteers that her mom pulled up at the farm. Kousa and basil also fresh picked... The chicken breast was awesome with some crispy parmesan in the crust. There was one left over, so I just ate the same thing for supper tonight.

I made grilled eggplant caponata tonight. It is a room temperature Italian salad served on grilled or toasted bread (I didn't have Italian bread). The grilled veggies are chopped and tossed with a handful of raisins, some capers, chopped fresh oregano, salt & pepper ad drizzled with olive oil and white wine vinegar. It is one of my favorite things to do with eggplant. Side dished of fresh corn picked yesterday and Caprese salads. 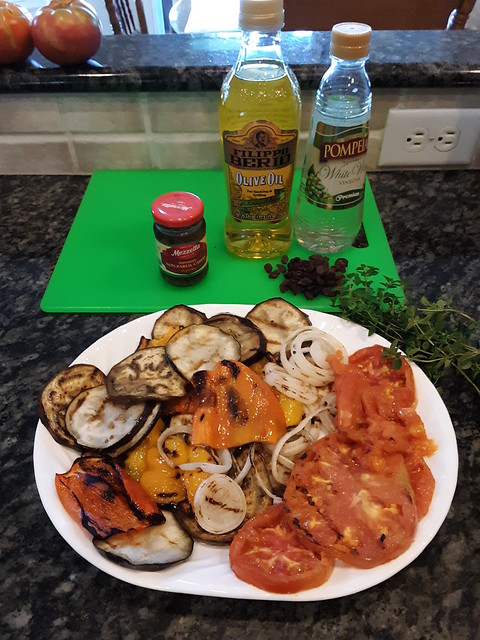 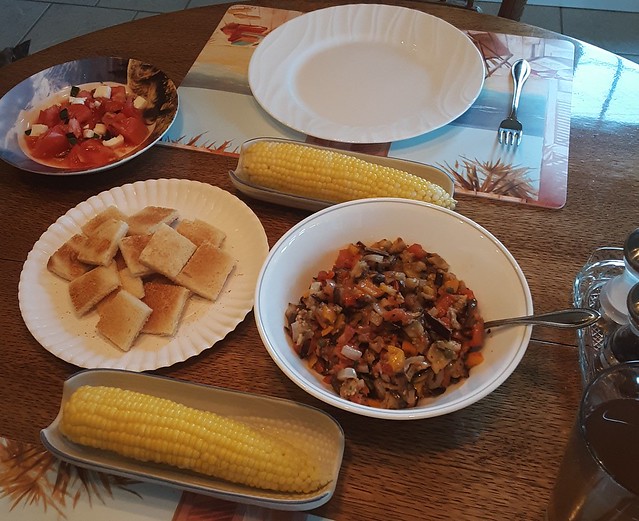 Today I made another batch of that pasta with raw tomato sauce, but this time, instead of canned legumes, I used some black chick peas (kala chana). I cooked about 1 1/4 cups in the IP for 80 minutes, plus the pressure release time. Also, the grain I added was some leftover cooked wild rice. Otherwise, the same as the last batch - garlic, basil, black and green olives, anchovies, capers, an a generous amount of olive oil, added to all those tomatoes. 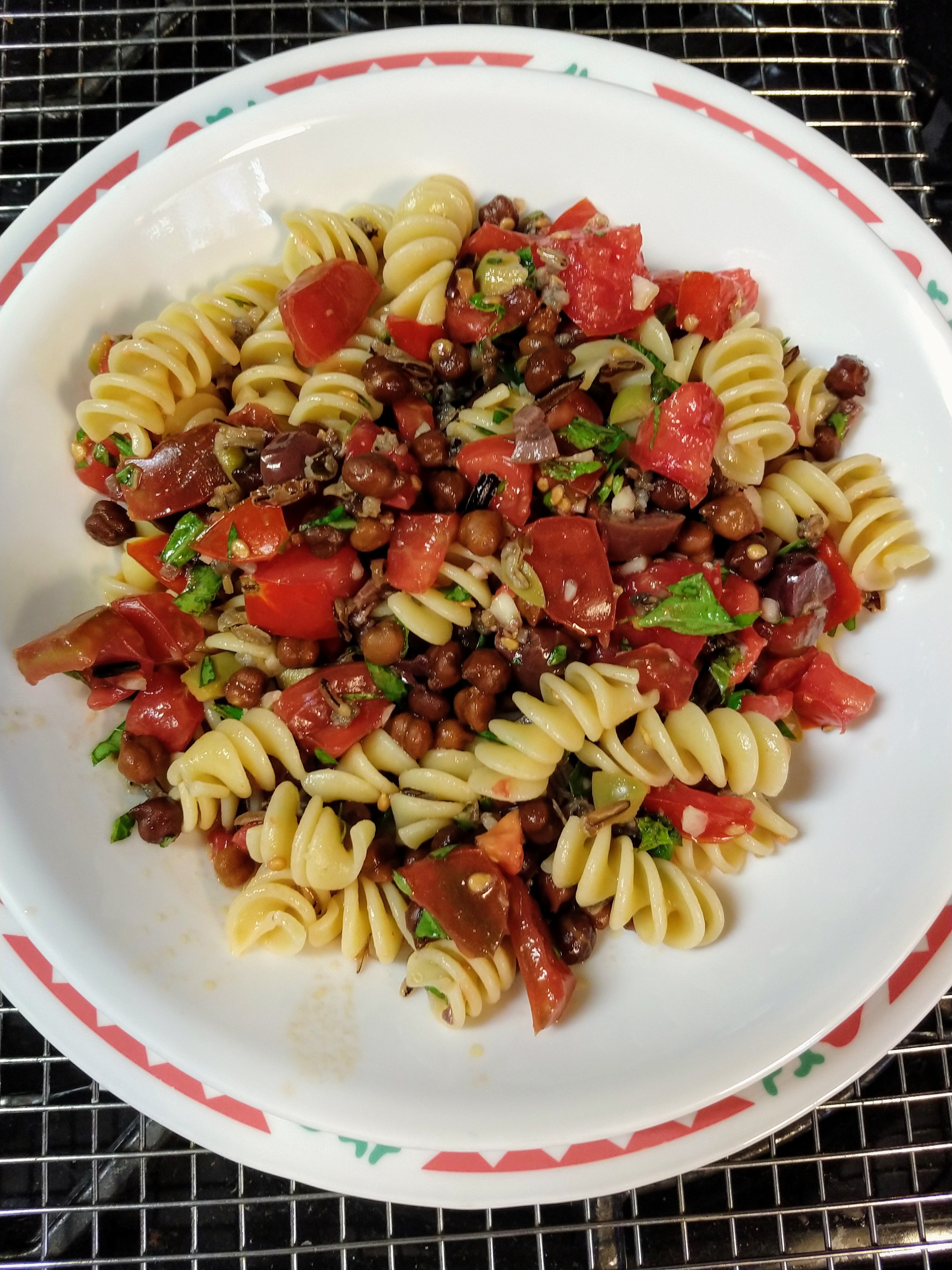 Latest batch of raw tomato pasta - this one with cooked wild rice and black chick peas. by pepperhead212, on Flickr
2

I made some chili con carne today, to put a bunch of those gourds into, and it turned out really good. I made the meat sauce first, in the IP, cooking it under pressure for 30 min., then letting it release naturally. I never did it this way, but the flavor developed very quickly - usually takes at least a couple of hours of simmering to get that flavor. I cut up the entire large bottle gourd (42 oz, before peeling and de-seeding), and put the pieces in the microwave, the trick I got from ATK for reducing the water in eggplant, for ratatouille. I peeled, deseeded, and cut up the largest tinda gourd I had - about 18 oz - and left as is, cutting into triangles, so that I could tell the difference. I added them after the meat sauce was finished, then I cooked them on slow cook for about 1 1/2 hours, and none of them turned to mush, as eggplant or summer squash would have. The dried out bottle gourds didn't seem firmer, though if I hadn't done that, a lot more water would have gone into the chili. As usual, I finished by thickening with a little masa harina, and ate it with some corn tortillas, and shredded cheese. 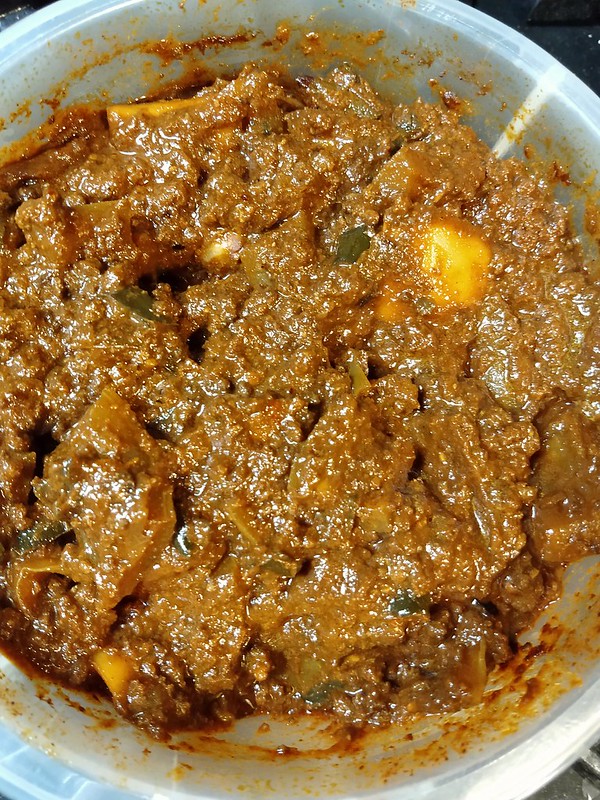 Chili con Carne, with bottle and tinda gourds added. by pepperhead212, on Flickr
2

Users browsing this forum: No registered users and 9 guests