Marinated the shrimp in garlic, olive oil, a little lime and fresh mint from the garden. Grilling the shrimp added to the overall dish. First time trying the French sheep’s milk feta, definitely has the sheep’s twang, but creamy, too. Very nice dish and dinner.
4

I made a sambar in my Instant Pot, with some toor dal and some whole oats, for bulk. I cooked some onions in some oil, then added a paste I made with peanuts, sesame seeds, and garlic, followed by the sambar masala, curry leaves, and tamarind. Then all of the water, dal, oats, and some okra. I put it in slow cook mode, and let it cook while I was in the garden for 2 hours. Then I added 2 eggplants, which I had cut up and dried out in the microwave for 8 min. I added that to the pot after the 2 hours, went back out, and cooked about 90 more minutes. Then I made a tarka, to temper the sambar. Served with a chutney on the side. 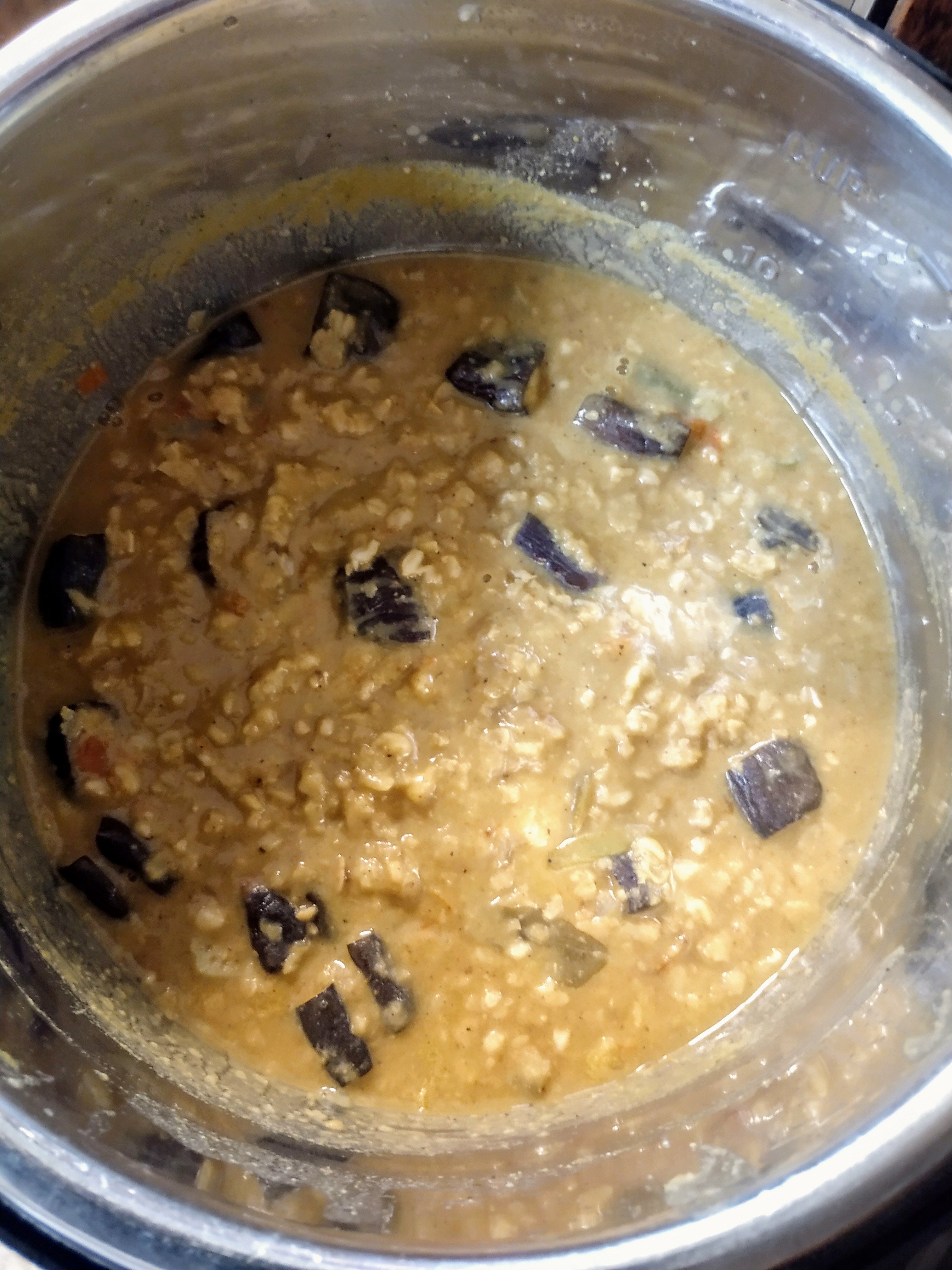 Sambar, with toor dal and whole oats, plus okra, tomatoes, and eggplant, for the veggies. by pepperhead212, on Flickr 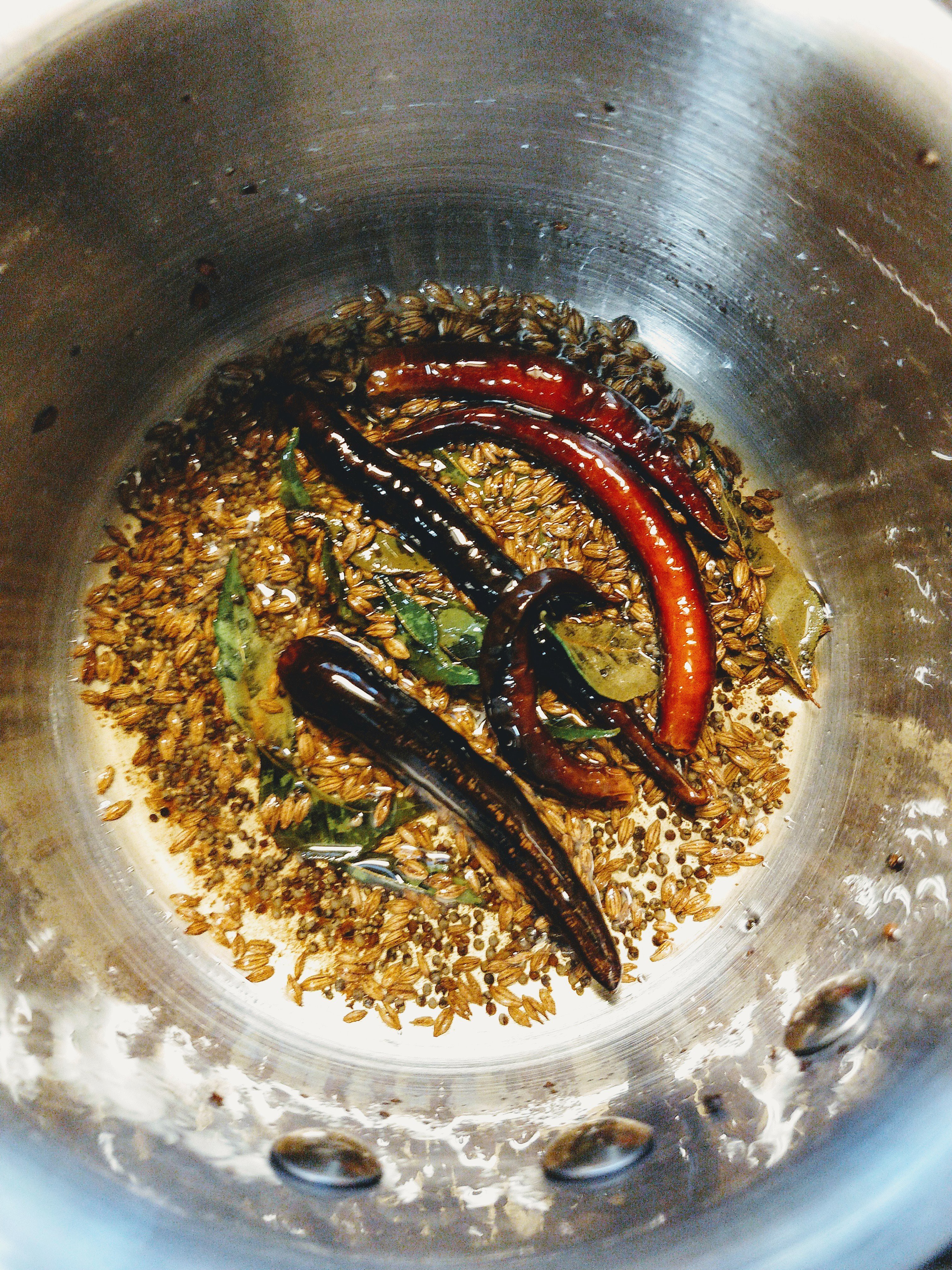 Tarka for the sambar, with coconut oil, mustard seed, cumin, Thai peppers, asafoetida, and curry leaves. by pepperhead212, on Flickr 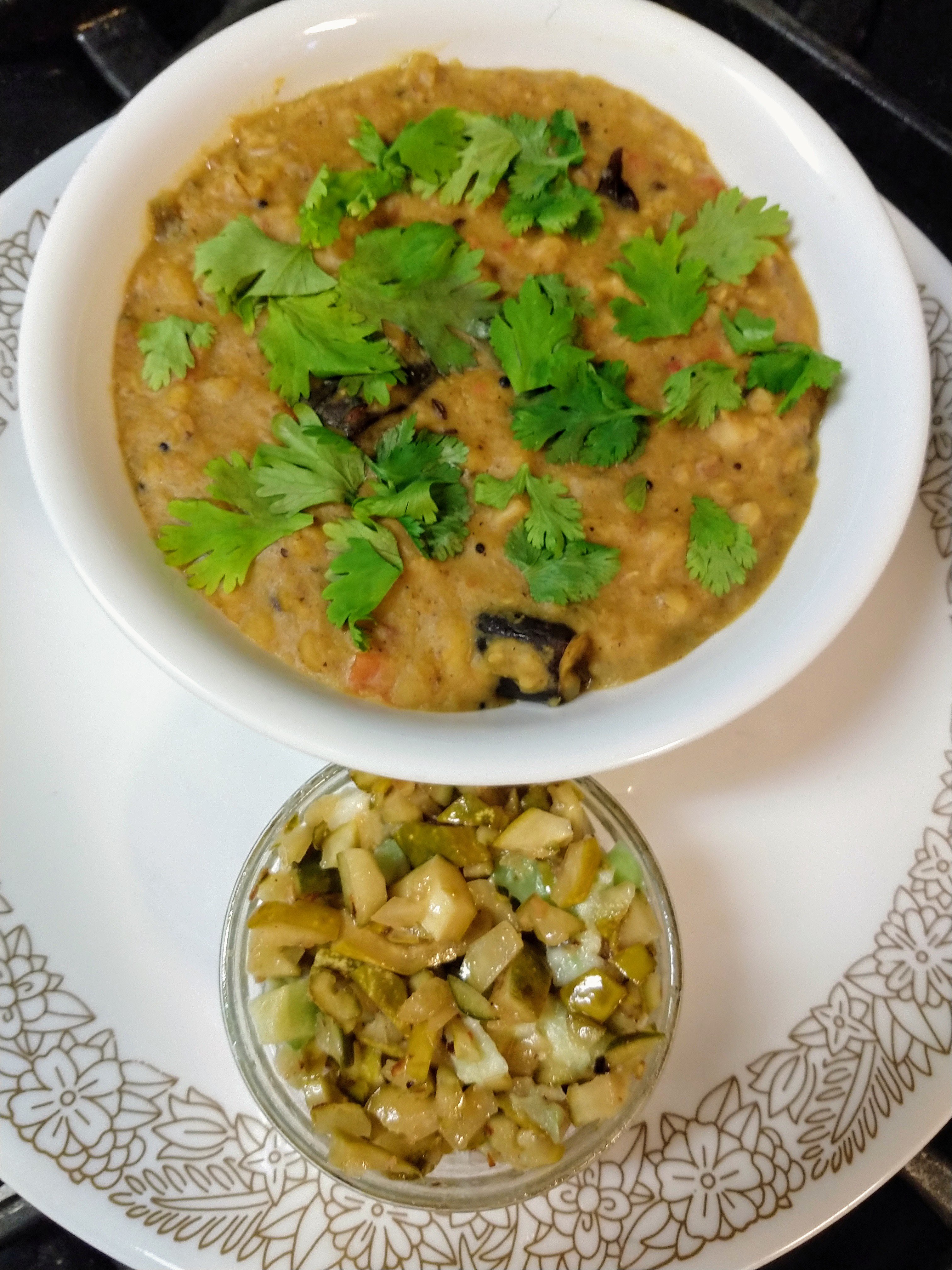 Finished sambar, with some chutney on the side. by pepperhead212, on Flickr
4

I'm wondering if you could give a definition for the words I don't know. What is:
Sambar
Toor dal
masala
tamarind
tarka
asafoedita
?
0
Top

I thought everyone knew these foods, and had them in their kitchens! lol

Sambar is a type of Indian dish, sort of a soup, popular in southern India, and usually made with toor dal, which is the most used lentil in southern India. It is also made with tamarind, which is a sour component of the dish, and it is better known in Thai dishes, like Pad Thai, but it is used in a lot of Mexican, Vietnamese, and other Indian foods.

Masala is just an Indian term for a spice mix. Garam masala is the best known, but this one I used the sambar masala, which is probably my favorite, and I made with a lot of hot peppers, curry leaves, coriander, cumin, fenugreek, black mustard seed, white poppy seed, pieces of cinnamon stick, and some channa dal, all tossed with a small amount of oil, and tossed in a skillet a few minutes, before cooling and grinding. The oil, tossed with the spices, gives the mix a different flavor than the types where the spices are tossed in the skillet dry.

Tarka, sometimes spelled tadka, is a spice mix often made to add to a dish at the end, for something often called tempering. It is started with a small amount of oil, and usually mustard seed added, which crackles, then hot peppers and cumin, and the last things, in this one, curry leaves and asafoetida, and the tarka is usually ready to pour onto the dal after around 30 seconds, or less.

Asafoetida, also known as hing, in Hindi, is a rather disgusting smelling spice, used in a lot of Indian dishes. I don't know the specifics, but certain Hindu sects do not eat garlic or onions, and the asafoetida is used a lot in their dishes, to add the flavor components to the dishes - after cooking for a while, it smells and tastes like there is onion in it! The same thing happens when it is cooked at high heat in the oil, in the tarka - the bad aromas cook off, leaving the better flavors. Something I often use this for other than Indian dishes, is when I'm cooking lentils or other legumes, for something where I'd normally use a whole onion - it's cheaper and easier than an onion, and at the end, it tastes like it was cooked with an onion.
0
Woodbury, NJ zone 6B-7
Top

Many westerners think many Indian foods smell disgusting.
Years ago the same could be said of Mexican foods.

You already know what side of the fence I'm on.
0
Worth
Paul Prudhomme Is The Head Chef In Heaven
Top

@worth1 Many people don't like the smell of anything that they don't normally eat! In recent years (or decades, actually) people have gotten into trying more and more cuisines, and slowly, the ingredients have become available, though there are still some unusual ingredients, like the asafoetida and many of the lentils for Indian, and epazote and some of the chiles, for Mexican, that we still have to get in the specialty markets. Back in the 70s, and early to mid 80s, I used to make a 90 mile trip every 8 or 9 months with some friends to NY city, to stock up on those specialty foods - even Philadelphia didn't have enough neighborhoods back then, except for Italian and a few other European neighborhoods, and a small Chinatown, with a few stores. Now, many of the things I had to get up there back then are in supermarkets, which are 3 times the size (probably more) as a result. And now, there is a Mexican grocer/restaurant in my small town! Amazing how times have changed.
1

Ordinary comfort food here tonight. I made Salisbury steak, gravy and mashed potatoes. I harvested acorn squash yesterday so I roasted one in the oven and added a opat of butter and a spoonful of honey.

I prepared pear slices (from our tree) in light syrup for the freezer today so we each had a dish of those to taste.

It was a really tasty meal but too much to eat so we are saving our pears for later. 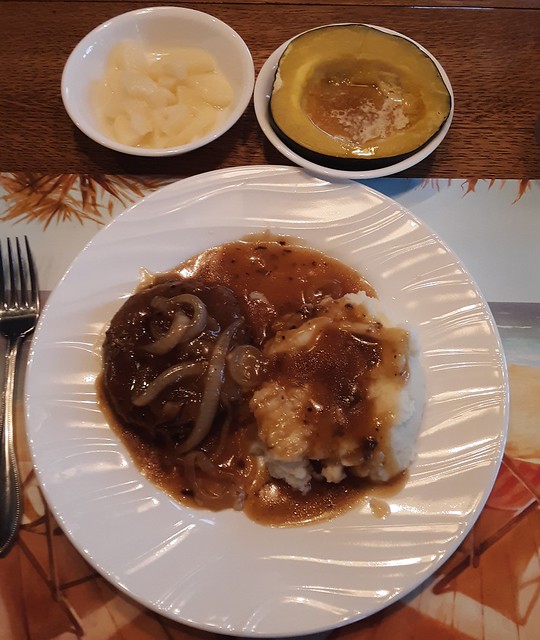 I spent yesterday cooking this stuff, today I am going to enjoy it.
All that stuff I cooked on the cheap eating thread.
Plus my ceviche, took a taste and I like it.

Tried pickled herring once and I couldn't get it out of my mouth fast enough.

Other than the raw shrimp in lime juice I had in Mexico and good raw oysters from the gulf this is my only good experience with raw fish.
0
Worth
Paul Prudhomme Is The Head Chef In Heaven
Top

So refreshing and summer like.
Now if I only had a few slices of fresh ginger.

@worth1 Diana Kennedy introduced me to true Mexican food, and I have all of her cookbooks! Some of her recipes I have memorized, since I've been making them since the 70s.
1

Made pasta sauce out of about 2.5 pounds of cherries from various plants. Really easy and delicious!

Spread cherries out on a cooking sheet and lightly coat with olive oil. Roast at 400 for 30 minutes or until the tomatoes blister.

When the tomatoes are done, in a sauce pan, saute onion and 4-5 cloves of garlic in olive oil, add salt and pepper to taste. This should take 4-5 minutes, just sweat the onions a bit.

Add the roasted tomatoes and their juice to the pot, as well as a handful of fresh basil leaves. Simmer for 30-60 minutes with the lid about a quarter open, then blend. (I used an immersion blender and did it in the cooking pot.)

Heard this fermented garlic in honey is delish. I know pickled okra is delish. Louisiana Green Velvet okra is my favorite now, since I have grown so many. Clemson spineless and Louisiana green velvet.
2

Made some oven fried salsify, yellow squash and okra to go with left over meat loaf. Oven frying is easy and uses a lot less oil. 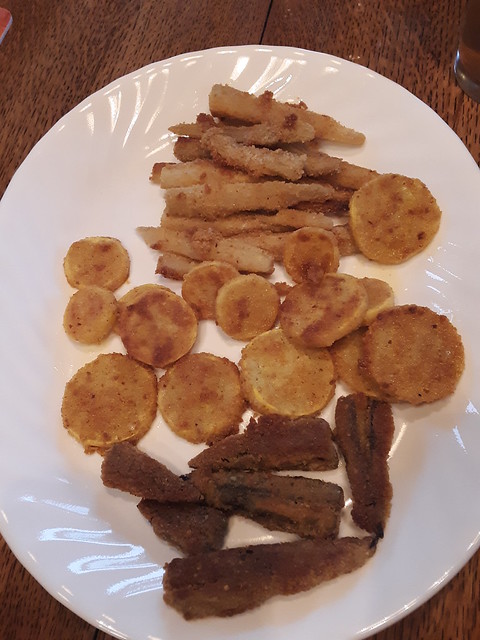 I making a giant kettle of ground chuck vegetable soup stew like stuff just like mom used to make.
How do I know it was like hers you might ask.
Because she sent me to the basement and freezer to get all the stuff and put it in a giant kettle.
Corn.
Celery.
Green Beans.
Potatoes.
Carrots.
Tomato paste.
Onion.
Tomatoes.
Ground beef.
Sweet peas if I have any.
Garlic powder.
Celery salt.
Paprika.
Salt.
Black pepper.'
1

Started out with meat carrots celery onions.
Added two cups water covered.
Let simmer.
Then as time went on I added other ingredients in timed steps according to cook times.
Found the peas.

Got me one a them there big ole fat packer style briskets ready to cook.
Gonna rub it down with kosher salt, freshly ground black pepper and cook it in the oven at around 250F in a corral of onions.
First I gotta trim some of the fat off and clean it up a bit.
Gonna separate the point from the flat too.
0
Worth
Paul Prudhomme Is The Head Chef In Heaven
Top

No not flat tires but the flat end of a brisket.
Seems more often than not the flat gets cooked sooner than the point of a brisket.
I have seen it all to often in BBQ joints and it is somewhat dried out.
So for the first time ever I came up with the idea of cutting the flat off and cooking it separately.
But I have done that before or just used it for something else.
What it the first time for me is to go way outside the box.
What I have done is to make a flat roll. yes a flat roll.
I rubbed this puppy down with kosher salt and freshly pepper rolled it up and tied off very tightly with butchers twine.
Fat on the outside so each slice will be nice a juicy.
You would think I had stock in butchers twine I use so much of it.

The point is in the oven and the flat is about ready to go in.
The meat on this brisket is very dark red too, I dont like to trim all the fat off of a brisket either.
I just cut the outside stuff off so it will be clean.
1

Here are a few shots of the brisket.

Users browsing this forum: No registered users and 9 guests