Do you grow any green manure before planting tomatoes? In November I planted the clover seeds as a green fertilizer. I hope that by the end of April it will grow so that I can dig it in and then plant the tomatoes in two weeks.
Vladimír
0
Top

A couple years ago I did some clover and never will again. It was a such a deer magnet that I had to put netting over all the brassicas to protect them. After the deer ate the clover to stubble they'd munch on the brassicas until the clover grew back a bit.
0
Top

Absolutely. every year! I consider it more of a mulch than green manure. I like the idea that after the die back it leaves a heavy mulch layer and the roots from the cover crop hold everything together.
This years garden I'm considering starting a cover crop (probably clover) in early spring and growing directly in the cover crop. I already do this with oregano. 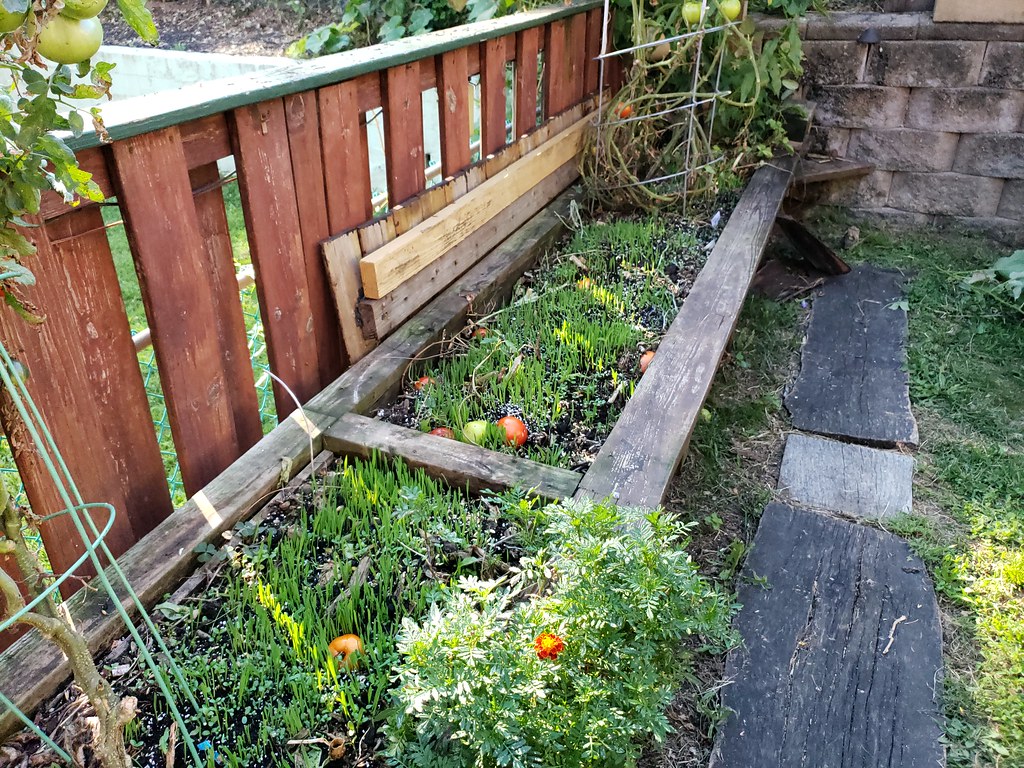 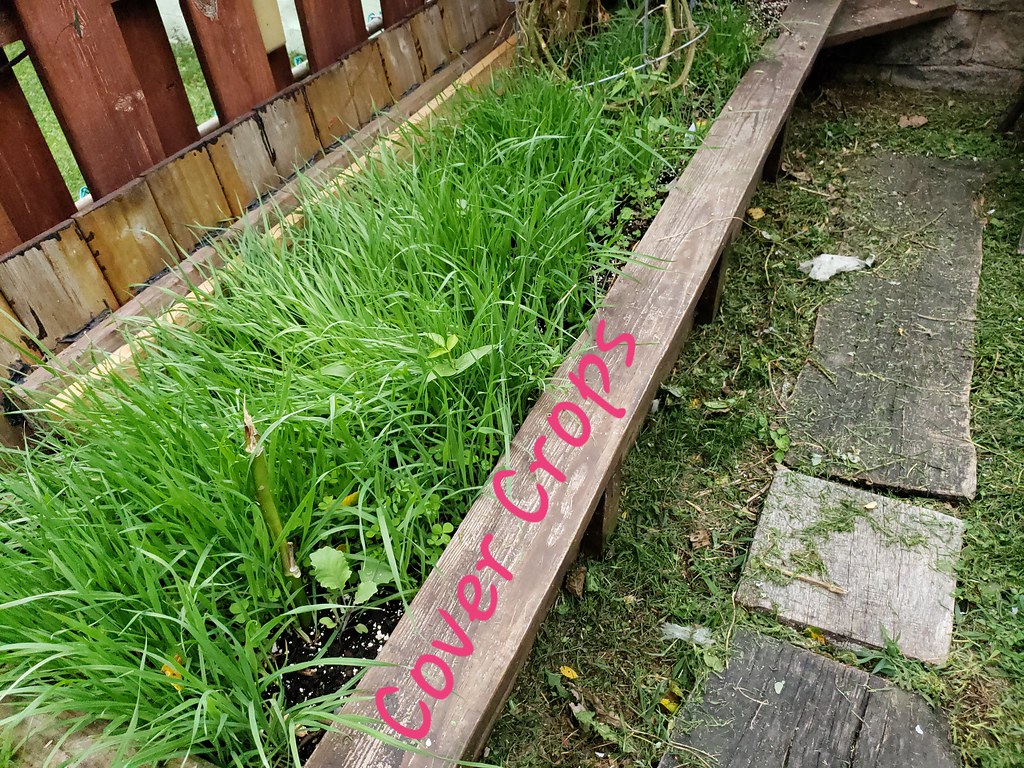 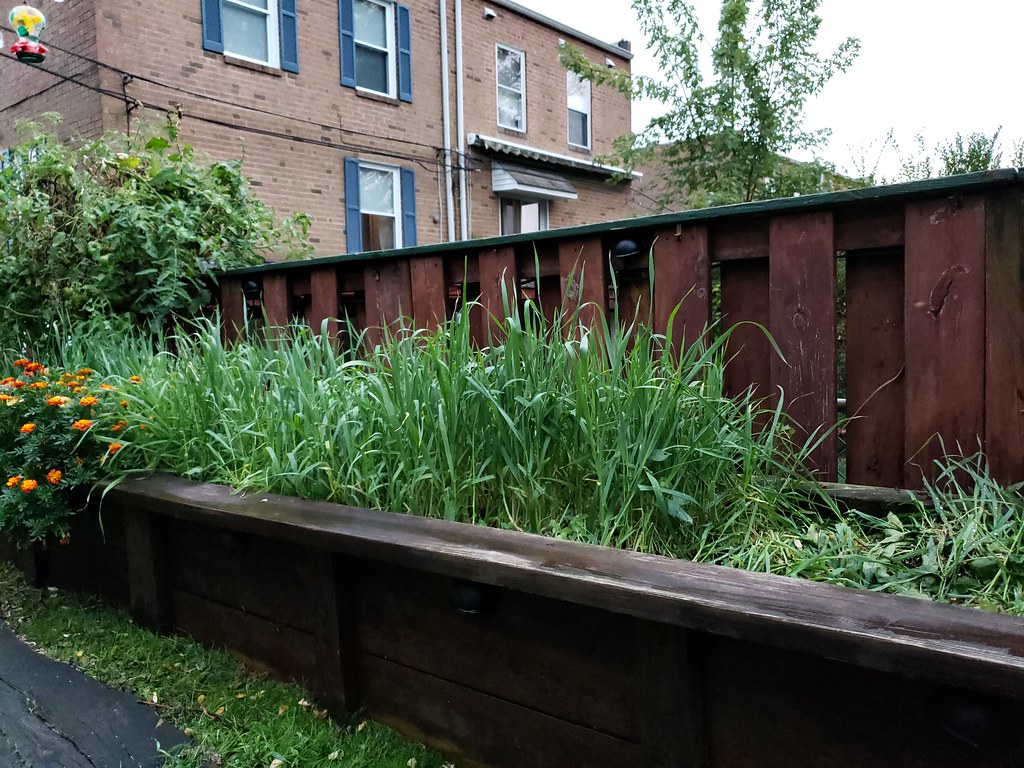 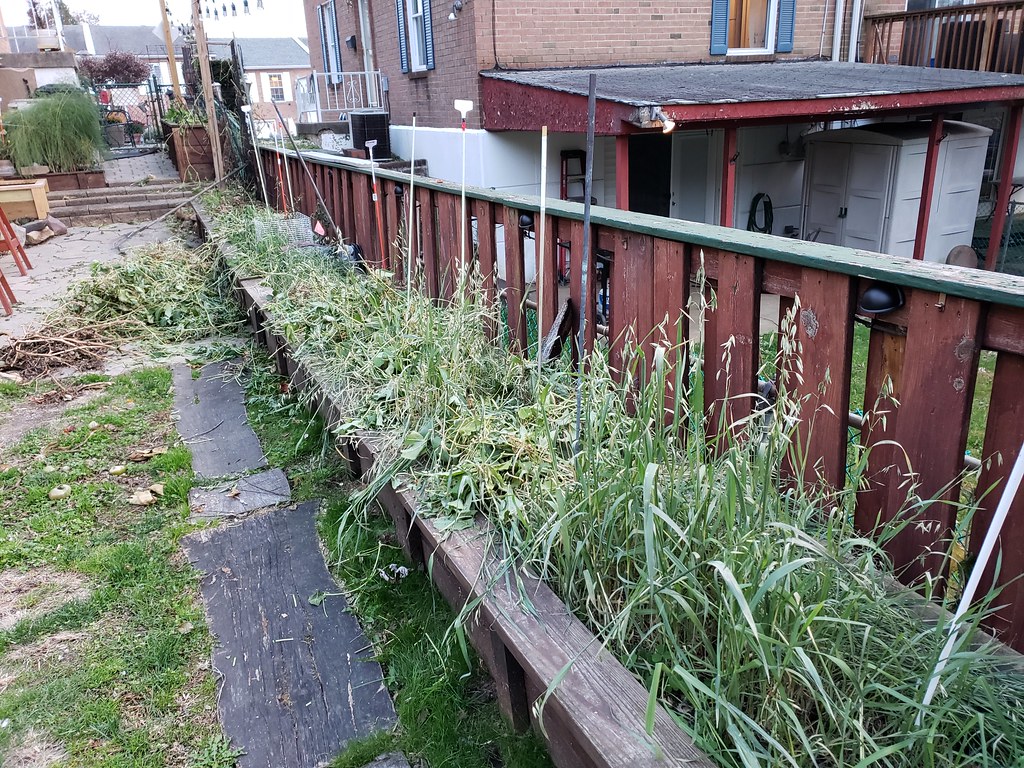 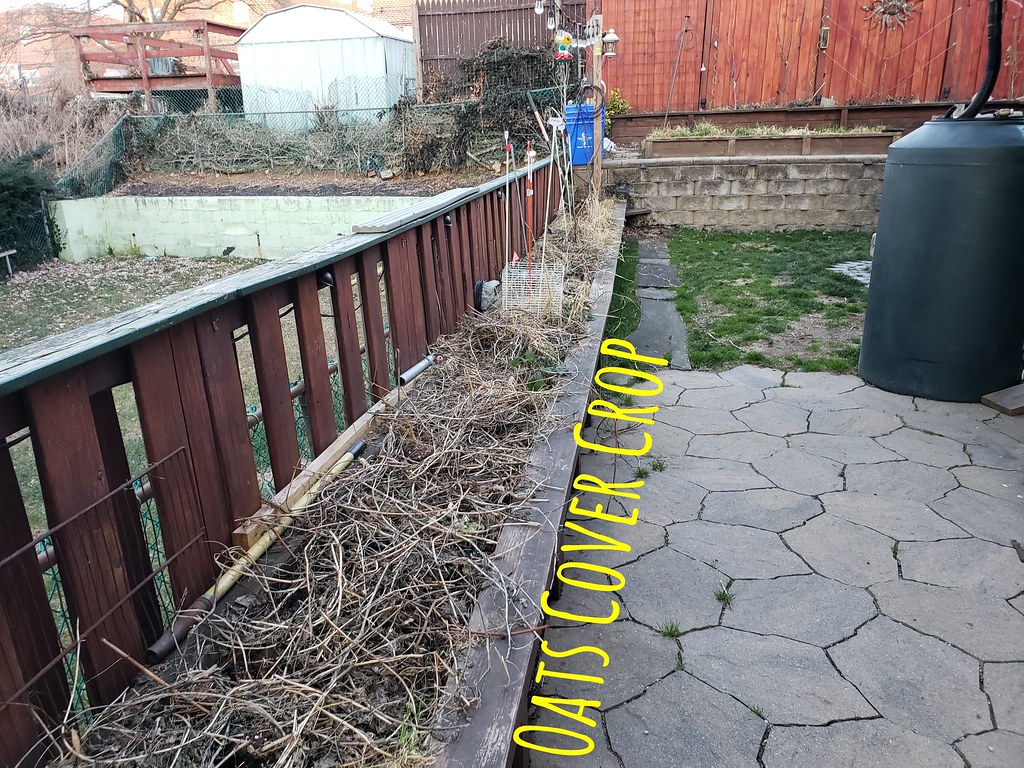 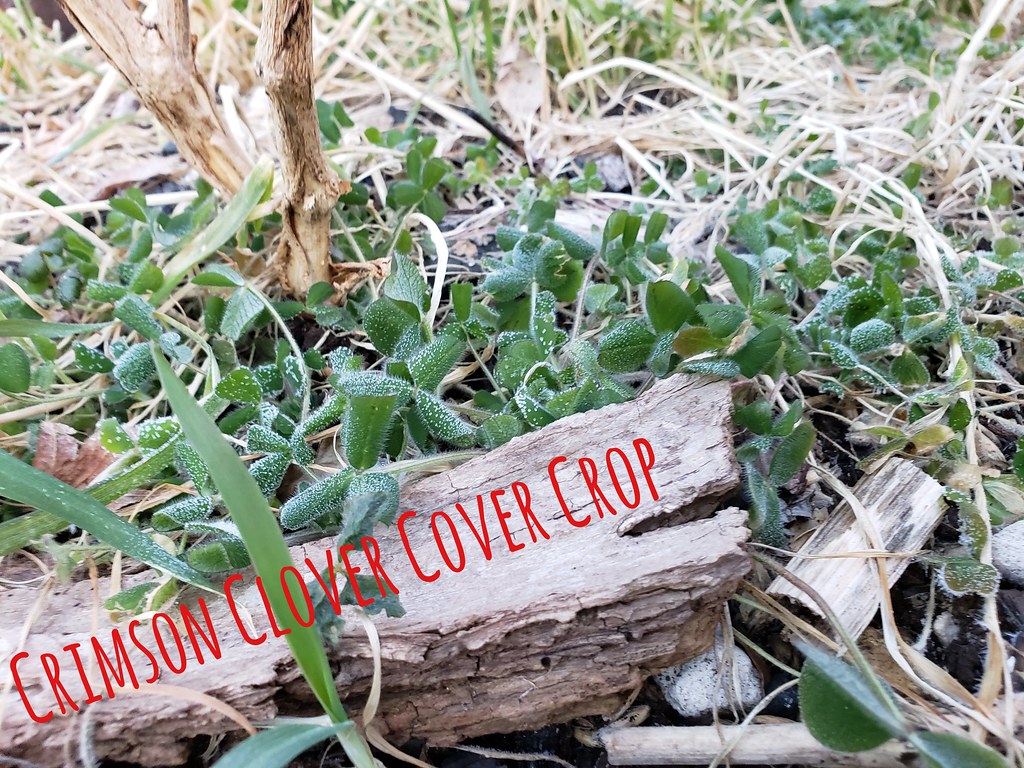 I just started to cut down my cover crop yesterday. I don't have a mower or shredder so I have to cut them down by hand w/ shears. It's a lot of work, next year I think I'll just do clover for the first time.
I plan to turn as much as I can into the soil, then create a compost pile on top of it. Saw the Berkeley method of hot composting, actually it's nothing new to me except the name. I have all the ingredients ready except for the straw hay which I'll try to get soon. If all works out I'll plant tomatoes in that bed in April.
1

I also like cover crops though I have had some issues due to ignorance. You don’t know what’s up until you try them. With Sun hemp it was a stink bug nursery. Also let it get out of hand and it grew as tall as sugar cane. Very hard to deal with it.
Anti-Nematode marigolds - shrub-like, another one hard to deal with. It would ruin lawn mower if you tried to mow over it so obviously you have to deal with these cover crops early on to get them incorporated into soil. I grew a clover mix but can’t remember much about it. Buckwheat is for organic matter but not much in way of nitrogen.
Some cover crops used for nematode control are best if you have sting nematodes but not good for root knot and vice versa.
I have used Aeschynomene (legume) and plan to use again as it is fern like and manageable. I believe it is used for cattle forage but I bought it for a cover crop. It is resistant to root knot nematode but according to brochure it has a low bio mass. That is why I must like it as it seems so much more manageable in raised beds and I wanted to actually harvest some of it for compost pile.

I have never heard of Berkeley’s hot compost method but as you said sounds like regular compost ‘rules’ but then you turn every day (wow that’s a lot of work) or every other day. But it does make fast compost. Interesting to read about it.
0
"When we kill off the natural enemies of a pest we inherit their work."
Carl Huffaker
Top

I've used a cover crop mixture in a raised bed. You really need to get this under control before it seeds which isn't easy in a bed 4 feet wide and high off the ground. It was very tough to dig a hole to plant anything, and still is even though the neighbor killed it off. If you use a mixture, read the components before you apply!

The clover I grow is Trifolium incarnatum (crimson clover). I planted it late so it didn't grow up much. But for the time being, despite some frosts, it remains green and I hope it will remain that way until spring. I also hope it will grows up by the end of April and that I could put it under the ground. In mid-May I will plant eggplants and ocher there. It's my attempt.
0
Top

I tried to chop up brassica residues into the bed before planting garlic... they were too tough and it was too cold at that time of year to break down at all in a couple of weeks. I ended up having to remove most of it as big ugly pieces I did not want to plant garlic into it.

Last year I tried out a few cover crops to see if I could produce my own seeds. We had another crappy cold summer, so it wasn't a great success. Barley did well and was early enough, but rats stole every head while I was at work one week.

Triticale planted in spring was just forming heads when it had to be cut down. And flax was slow to germinate and only set a few seeds before cutting time. Even the peas were really late. I found that the ground under these crops was hard and weedy, and the stalks weren't suitable for digging in so they ended up in the compost pile and I just prepped the bed for garlic with compost instead of digging in any residues.
I just looked at a video of the hot composting method, it does look like work but worth trying on top of the bed for a fast green manuring. Spring obviously would be better timing for that, because it's getting warmer anyway. Also may be worthwhile to get a chipper shredder for a day and spare the work of chopping by hand...
I also want to try the crimson clover and buckwheat and radishes after garlic harvest in august, since they should winter kill here and be ready to dig in come spring.
0
AgCan Zone 5a/USDA zone 4
temperate marine climate
yearly precip 61 inches/1550 mm
Top

I tried buckwheat in a raised planter last spring ....... didn't let it go too long because I wanted to plant ...... easy to turn over by hand, decomposes rapidly and flowers attract beneficials
0
Zone 8b
Top

Bower , that was a good video. Do they have other video topics? Thanks.
0
"When we kill off the natural enemies of a pest we inherit their work."
Carl Huffaker
Top

I'm not Bower, but if you look at the youtube link, you will see that there are many topics by Geoff Lawton: Permaculture.
0
Grow Something!
~ Patti ~
Top

I planted oats/peas and the amount of vegetation was great, but I had an explosion of slugs after I cut it down for chop and drop mulch. They are up the corn that I had planted beneath and was coming up so nicely.

Next time I will definitely compost.
0
Ivan
Zone: 10A
Climate: Mediterranean, chaparral
Top

sBox wrote: ↑
Sun Apr 19, 2020 12:25 am
I planted oats/peas and the amount of vegetation was great, but I had an explosion of slugs after I cut it down for chop and drop mulch. They are up the corn that I had planted beneath and was coming up so nicely.

Next time I will definitely compost.

Right now I'm sprinkling crushed eggshells around my greens to see if it keeps down the slugs.
0
Top

sBox wrote: ↑
Sun Apr 19, 2020 12:25 am
I planted oats/peas and the amount of vegetation was great, but I had an explosion of slugs after I cut it down for chop and drop mulch. They are up the corn that I had planted beneath and was coming up so nicely.

Next time I will definitely compost.

Right now I'm sprinkling crushed eggshells around my greens to see if it keeps down the slugs.

I tried egg shells, but I think I should have set out beer traps instead. I just couldn't get ahead because there were hundreds of rice grain sized babies that were all over the seedlings.
0
Ivan
Zone: 10A
Climate: Mediterranean, chaparral
Top
Post Reply
14 posts • Page 1 of 1

Users browsing this forum: No registered users and 2 guests