Anybody doing any comparisons 2020? You just need 2 boxes.

Or what is your tried and true set up? New mix or refreshing, which fertilizer, and do you use the snack???
How is it all working? What are you gonna plant in them? Do tell!

"When we kill off the natural enemies of a pest we inherit their work."
Carl Huffaker
Top

Lol, I love my grow bags but there are lots of EB fans here.
“Never try to outstubborn a cat.”
- Robert A. Heinlein
Top

I have a lot of EBs, as well as homemade SIPs, and I have gotten such incredible production from my peppers and eggplants, that I have had to reduce the numbers of them both, but I still get more than I need! I used to plant 48-52 pepper plants in the ground every year, but I reduced by a dozen, when I had 10 in the EBs, and last season I had 19 in EBs, and only 8 in the front flowerbed, and still had way more than even I can use, dried and frozen. This season, I'll plant a few less, though I can't go much lower, given the number of varieties. 4 per box, with fairly large varieties (ancho, numex, jalapeños, Aleppo), but only 2 per box for habaneros.

Tomatoes I use the homemade ones, with larger reservoirs. The SIPs with a bucket inside another I'll use for determinates, since they are smaller.

Okra does better in EBs than I have had it do in the ground. Only 6 per box, not the 8 suggested.

I also had some odd things in SIPs - bitter melons and bottle gourds. In that same family as cucumbers, which also do great in them, getting that non-stop supply of water.
Woodbury, NJ zone 6B-7
Top

Pepper head, how to you like to set up your EarthBoxes and sips? I don’t think I have ever done eggplant in an EB but I saw them at the EarthBox Center and they were ginormous and loaded with eggplant. That is interesting that you only do 2 habaneros per box. They must get huge.
"When we kill off the natural enemies of a pest we inherit their work."
Carl Huffaker
Top

Those habs do get huge, with huge numbers of peppers on them! One day I had over 60 ripe ones from the two plants, a chocolate hab and a Red Savina, and already had dried and frozen more than I will use in the off season. So I took all of those to my friendly neighborhood Mexican grocery/restaurant, where I take my excess peppers and epazote, and the owner gives me deals. He loved getting those things - like he says, nothing they buy comes close to them for flavor.

The eggplants also create huge numbers in SIPs. I used to grow 15-16 EPs in the ground, but 6 in 3 SIPs produce so many that I have to dehydrate them - something I never did before. Last season I only grew 5, and didn't even get my most productive one out there (the seeds didn't sprout), and actually bought 2 "Indian eggplants" (I never do this, as a rule). Those did ok, until heat came, and they stopped, like tomatoes, but recovered, and eventually, I was dehydrating them again! This is in addition to eating them about every other meal.

Here's a trick I have to do for some of the peppers, mostly milder ones - I totally enclose the EB in the light Agribon, to keep pepper maggot flies off. I used to have to put up a hoophouse, with the fabric over it, but this is easier, and I don't have to grow so many of the varieties. I took some pvc pipe to build a rack, to put the fabric over, but the larger plants grow to the top. I can take it off around 8-1, fortunately. 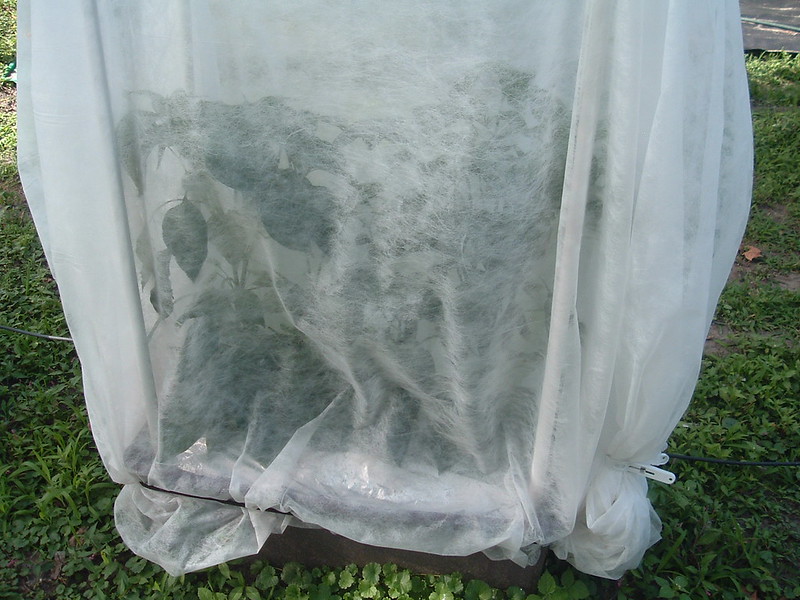 Here it is uncovered, showing the pvc, and how tall those plants got! 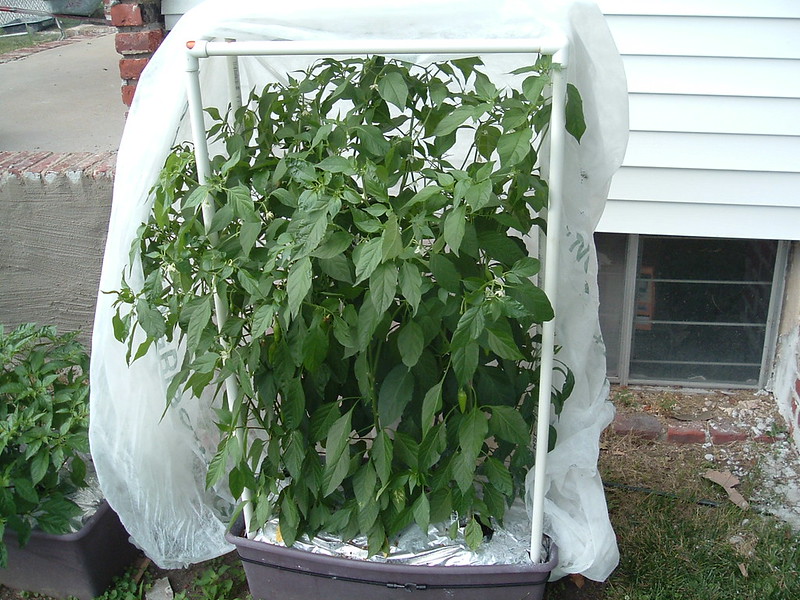 This could probably be used to isolate from other bugs, though I tried it with squash, for the SVB, and the plants just didn't produce well, with a parthenocarpic variety, or with hand pollination.
Woodbury, NJ zone 6B-7
Top

Nice plant. Is that aluminum foil? Some growers here in Florida use silver mulch for thrips. I bought silver mulch and red just to see what they were like—both very thin. Not so easy to use as a cover on EB.
"When we kill off the natural enemies of a pest we inherit their work."
Carl Huffaker
Top

I bought some red mulch plastic (on sale) and it's so thin that I have to put a couple of layers of newspaper underneath it to stop weeds growing through, but at least it keeps the moisture in

MsCowpea wrote: ↑
Tue Jan 21, 2020 8:49 am
Nice plant. Is that aluminum foil? Some growers here in Florida use silver mulch for thrips. I bought silver mulch and red just to see what they were like—both very thin. Not so easy to use as a cover on EB.

I don't have a problem with thrips here, KOW, but I got a 250x4' roll of that stuff really cheap, years ago, before the EBs. It is very thin, but much more durable than the usual, stretchy type plastic, and I get 2 years out of them almost every time. I just cut it about 34" x 24", for the EB, enough to tuck it into the sides, next to the soil; then I secure it with one of those landscape staples on each side. I have tried red, black, and silver; red didn't seem to have any advantage, and weeds would get under them, even if newly set up! Silver seemed to do a little better than black, maybe it reflects light to the plants? By the second year, however, much of the silver is worn off.
Woodbury, NJ zone 6B-7
Top

This year I plan to use 1 box for cucumbers. I haven't been able to grow cukes or beans for the past few years cuz of spider mites, they succumb quickly. But I plan to put the EB in a part of the garden that is isolated where the mites don't go.
I did an experiment years ago before mites appeared here, where I grew cukes in both an EB & in a raised bed. The results were surprising--the ones in the EB were less green in color, sort of a watered down hue from the ground ones. The flavor from the ground was clearly superior.
That said, the yield from the EB was far better. I now plant peppers & eggplant in them now & need to only use 1 EB each to get more veggies than we can use. I plant at least 4 sometimes 6 to a box. I've also planted 1 eggplant & tomato together but the eggplants seem happier planted with their own kind. That's ok as I now plant 2 tomatoes in a box now.
Top

To what do you attribute this increase in productivity when using an Earth box? More even watering? More fertilizer? Better soil?
Top

Nan6b wrote: ↑
Tue Jan 21, 2020 5:28 pm
To what do you attribute this increase in productivity when using an Earth box? More even watering? More fertilizer? Better soil?

I'd say the even watering & fertilizer for sure. EBs are hands down the best for peppers & eggplants in my garden, they love to grow in them.
I still grow tomatoes 3 ways--in ground, pots & EBs & will continue to do so as long as I can. But looking into the far (I hope) future, it'll be just EBs at the end, purely for the ease of them. When I can no longer haul heavy bags of soil amendments, manure, or make compost, or bend down, I'll have my EBs elevated so I'll always have tomatoes