Old seeds - to throw or not to throw

Now, that is great!!! I am so glad they sprouted for you, hope they do well all season, too! What a special thing for you, you go girl! Or is it you grow, girl ??
Together, trees make an ecosystem that tempers the extremes of heat & cold, stores lots of water, & makes a lot of humidity. In this environment, trees can live to be very old. To get to this point, the community must remain intact no matter what.
Top

EdieJ wrote: ↑
Fri Jan 31, 2020 10:38 pm
It really is too soon for seed starting but I really had not thought they would sprout and now I'll be darned if I throw them away. So they are in potting soil under seedling lights - I will have to worry about how to keep them going until I can figure out the next step. But I am just over the moon about them!!

In December 2015 I got a wild hair and started a tomato. Notes don't record the event but it's possible it was a Celebrity or a Juliet. By February I was trying to figure out how to deal with it as it was too big for the light shelf and it was too cold on the porch even when surrounded buy a plastic covered tomato cage. What to do?

Inspiration hit one morning when I realized it didn't have to be under the lights. It could be beside the lights if I faithfully kept it turned every day. So I took one of the lights and hung it vertically on the plant stand and then sat the pot on a bucket to raise it up. 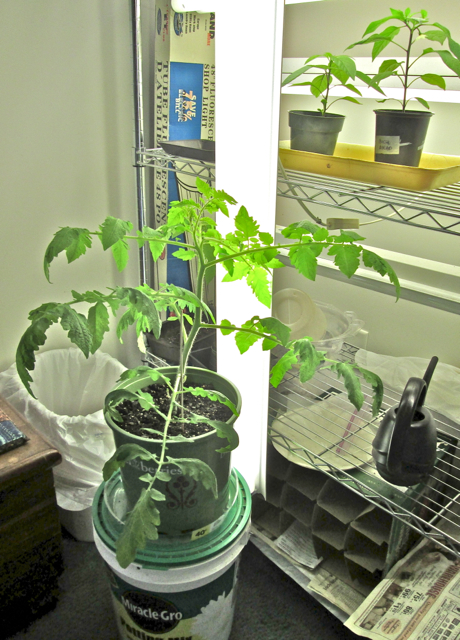 It should have been raised higher and it was just an old T-12 light but it worked to bridge the gap between the end of winter and inklings of spring. On nice days I'd tote it out to the porch for a dose of real sun.

You will solve the "next step" quandry. I just know it!

This year, it will be my challenge to revive tomato seeds that are older than 10 years. After a huge disappointment in the past 2 years (due to the heat) with new-to-me varieties (mostly the bigger ones), I've decided to grow mainly varieties that have done fine in the past. I'll pre-soak them for 24 hours in warm water with a bit of fish emulsion (as I've run out of the guano asmx recommends). I've already made good experiences with diluted fish emulsion, VERY much diluted emulsion.

Several years ago, somebody (on the "other" forum) had started an experiment with tomato seeds. He had found out that there is a cut between 16 and 17 years as to the seeds. Still some germination with 16 years old seeds (but after weeks!), no germination with 17 years old ones. My oldest ones are 12 years old, so I have good hope.
per aspera ad astra
Top
Post Reply
43 posts