When I was with We Grow Garlic, I think that it was about 14 pounds of Martin's that went to Filaree. Haven't looked lately but it's expensive and almost had a cult following. Burpee had it on their site in 2013 and sold out real fast. We probably had at least 150 varieties and there were probably 4 or 5 which were close to it for size. My avatar on other forums show me with 3½" bulbs and I think that it can do 4".

I do not grow it for selling but will share it for nominal cost. Generally it has been about a pound plus 50+ bulbils for $15 which includes postage. At the moment I probably have 115 plants of 125 cloves planted. Local friends are gong to get a lot of them. Scapes have been removed from about half so there will be bulbils available. Being a rocambole, there will be divided bulbs in one year from bulbils. I've had lots of fun with this variety since 1983.

Certainly one nice looking garlic and at that size! Too bad it is not available in Oz
0
Top

I would like to place an order for 1lb. I'll send you an email. Thanks!
Top

Wow! $40 a pound for Martin's? I have always just grown garlic for the fun of growing it. I'll probably offer it here as I suspect that a few would be interested.

That's $10 for 1/4 lb. $23 for 1 lb. $23 is about the average going rate for 1lb of seed garlic. I have a farmer who gives me some seed garlic cheaply but I like to pay at least the going rate because farming/gardening is not an easy business. We need to support the smaller farms.
1

When we started We Grow Garlic, told Karen to charge $1 per bulb plus postage. I wish that they would have stayed in business. It would still be the cheapest source if I had any influence. I don't know who owns Filaree now but we were offered a chance to buy it. It would have been name and stock only. Would not have been fun if it were a real business.

i wouldn't mind trying martins again some time soon.
i had it for a few years and then one year it all went bad in the garden.
the garlic that came to me as german hardneck from a guy named rodney
when we lived in the thumb produces large bulbils that will give you small
bulbs of garlic the following year. no 3 inch bulbs, but decent size for sure.
i save some bulbils each year. i currently have about a hundred bulbils planted
in addition to the regular crop.

martin
still growing the catawissas that you sent me one year. i sent some to sandhill preservation.
they now have them too.

Martin I would love to place an order for some garlic as well. What is the best way to do this?
0
Top

Thanks for the harvesting tips. Being new to growing garlic and having little space for it (this past year I planted 9 cloves), I didn't want to take the chance of digging them up too early and getting small or no bulbs. Maybe This Fall I can figure out how to add a few more and dig up a couple earlier next spring as a test.

The ones I dug up 2 1/2 weeks ago have been hanging under my awning to dry out and are looking decent. Unfortunately I keep hitting my head on them every time I pass by, forgetting thy're hanging there.

Thanks for the garlic video. My current browser won't play Youtube videos so I'll be coming back using Edge (which I hate) to watch it.
Top

You can carefully dig around the bulb and inspect it to see if it's ready for harvest. Then if it's not ready, put the dirt back.
Top

Thanks Ponyexpress, I didn't know that.
0
Top

I dug up all but my metechi today, as most of those still have a lot of green. I got 97 to hang in the basement, plus about 20 that need to be used quickly (gave a dozen of those to my neighbor, who brought me over a plate from their BBQ). Estonian red was the best, with very few of those plants that turned brown too fast, which happened with a lot of the new varieties Italian Red and Montana Giant, both of which had a good number of large bulbs, but a number of those were the early all brown plants, with just a green stalk. I dug them up as they appeared, but had to label them "use 1st". 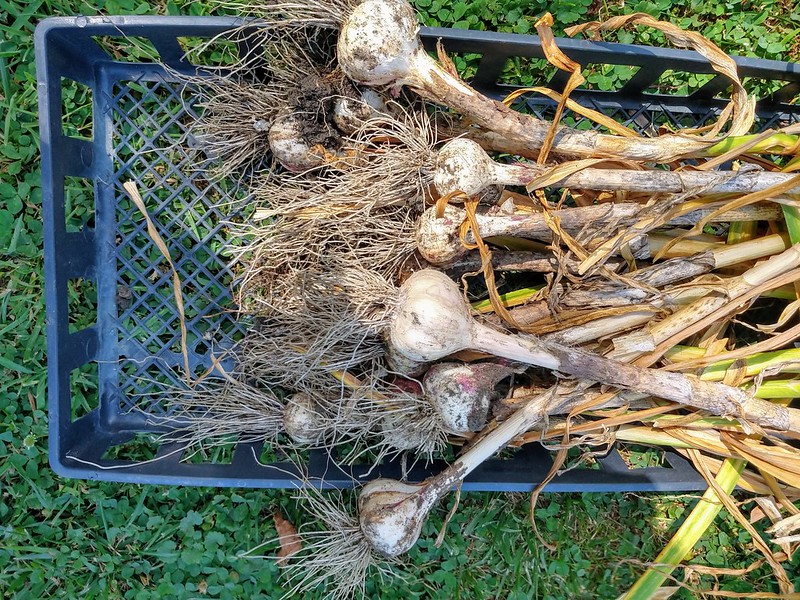 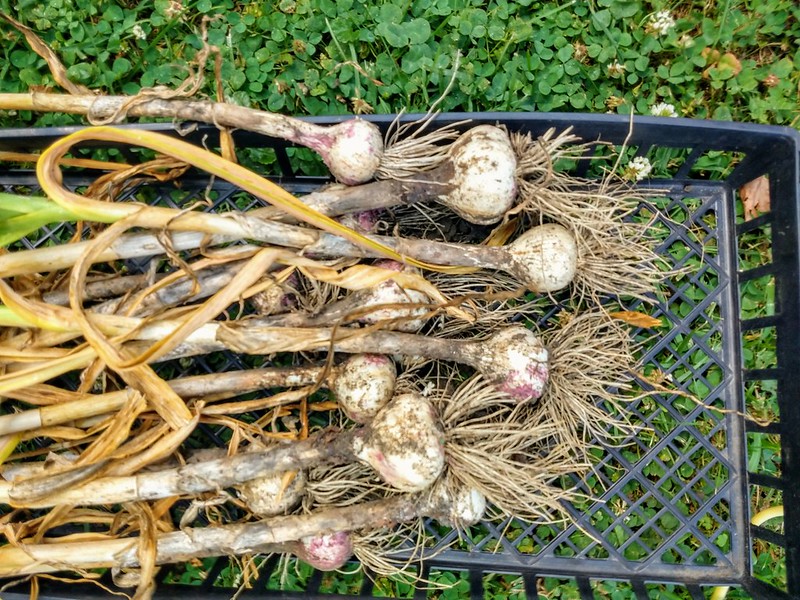 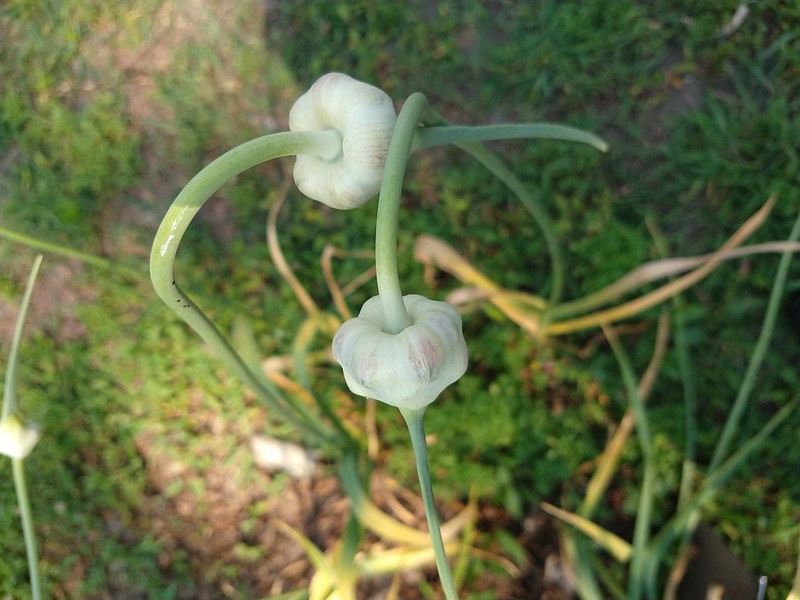 A couple of bulbils left on some of the Estonian Reds by pepperhead212, on Flickr 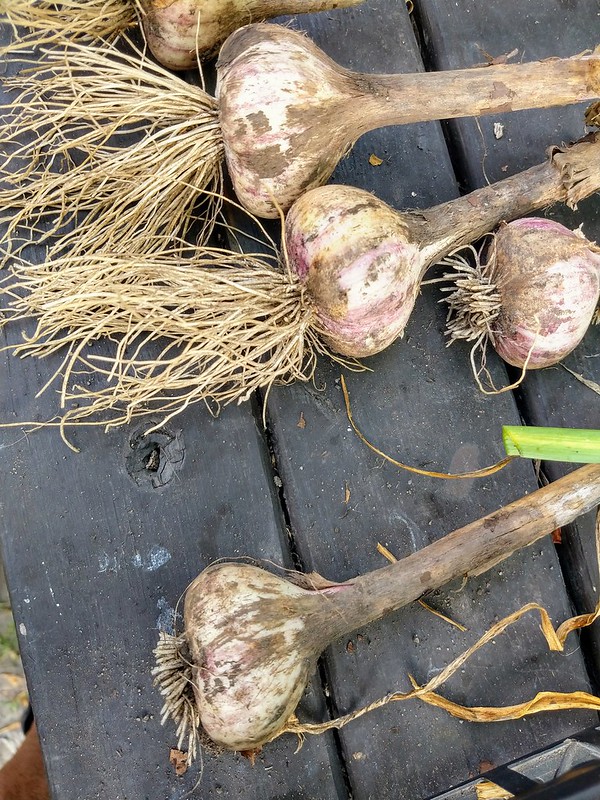 Estonian Reds, the one on the bottom with just 2 huge cloves. by pepperhead212, on Flickr 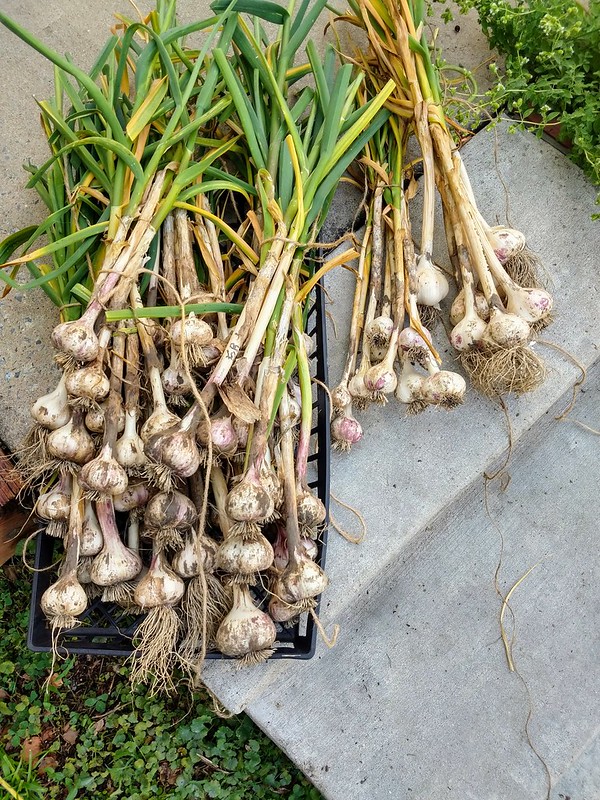 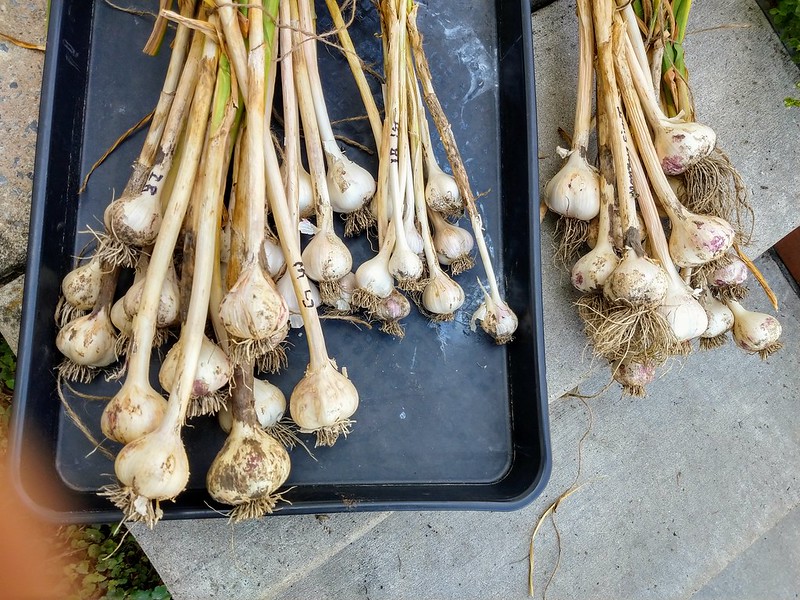 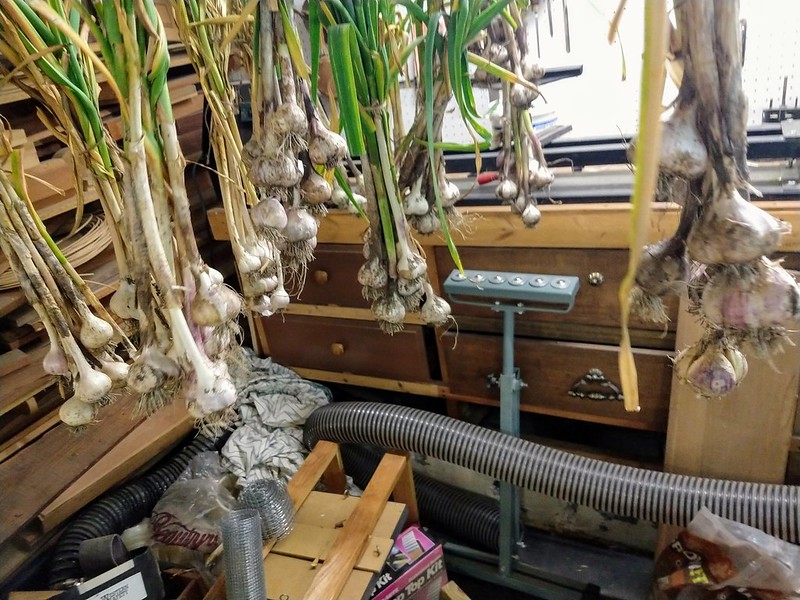 Montana Giant, Italian Red, and Estonian Red, hanging in the basement to cure, in front of my lathe. by pepperhead212, on Flickr

In just a few days, the Metechi gets dug up. In just the last couple of days, quite a few of them have gotten down to the desired 4 greens.
1

Nice crop pepperhead! Do I see writing on some of the stalks? If so, what are you using? A sharpie?
0
Top

@ponyexpress Yes, it's a sharpie. I just write on something like ER or some other abbreviation of the variety, and 1st, for a bundle of each type that has to be used right away - heads that have fewer layers of skin, and smaller ones, as a rule.
0
Woodbury, NJ zone 6B-7
Top

I harvested about a dozen Metechi today, after noticing that a number of those had lost most of the green quickly. I dug them up individually, which I did a while back with the other varieties. Everything I left in had at least 4 green leaves - I dug 2 with 4 greens that were large stalks, but left a few smaller ones. When only dealing with the few plants of the one variety, this is doable, but not when I had all the rest of those! I might harvest tomorrow - I'll play it by ear, as I might try to dig them out, if rain is coming, as I would rather get them a bit smaller, but dry, so that they can store longer. Tuesday is more likely for rain, but forecasts change constantly, and every day is hot and humid! 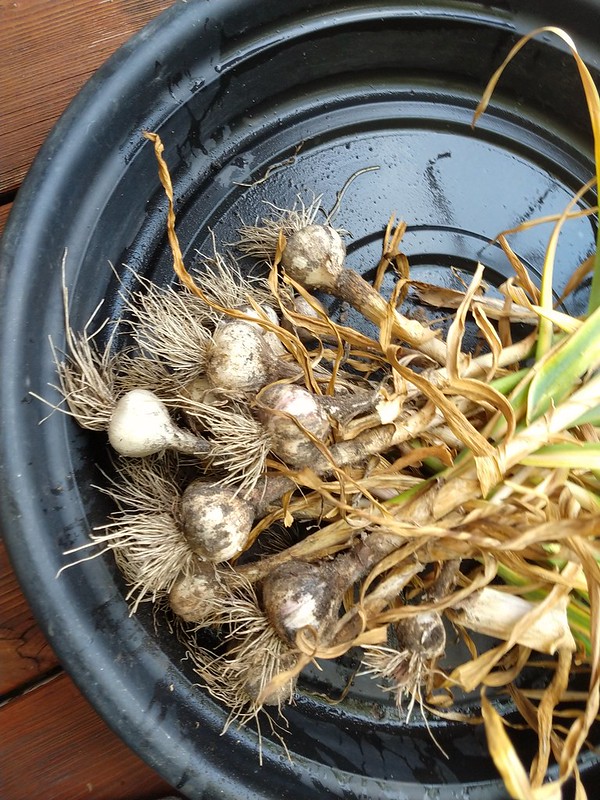 Metechi - about a dozen dug up early, since they had few green leaves left.7-05-20 by pepperhead212, on Flickr


Bower wrote: ↑
Sun Jul 05, 2020 11:25 am
Nice harvest, Pepperhead! Do you think those new varieties will become better adapted after a few years?

It's possible, and it remains to be seen how they taste, and how they store. The storage is the main issue with me, though those Estonian Reds have the largest cloves I have grown, and are fairly dependable, though they only store 3-4 months. This is worth it, for the one variety, but I am always looking for ones that store longer.
0
Woodbury, NJ zone 6B-7
Top

So far I've found that standard Purple Stripes are my longest keeping hardnecks, but the porcelains keep very well too. I have just a couple of porcelain bulbs left but they are still good and no green on them, when the planted ones are putting out scapes. I have only stored a few small bulbs of Kostyn Red Russian in the marbled purple stripes, which didn't keep quite as long as porcelains. A friend of mine is stuck on growing some softneck every year just to fill the storage gap between her porcelain crop and the next harvest.
Another thing I've noticed is that bulbs keep longer when harvested on the early side. That might play into the long keeping of those late season varieties that don't always have the degree days to full size here. I've even had some undersized bulbs of Spanish Roja, which is usually getting soft by January, which kept surprisingly sound for 9+ months.

Cure temperature/time and storage conditions are supposed to affect garlic shelf life as well... Sometimes I've kept my bulbs in the kitchen area, and they didn't last as long. This year I kept all in the cool room downstairs, which doesn't generally go above 65 F even on a hot day, and that seems to have made a difference. It's hard to get any intel on the latest possible storage times, when you'd rather eat them up than wait to go soft.

After curing outside in a shed for a couple of weeks, I also store mine in the cool basement. This works well for me and they keep from one harvest tot he next.

I just harvested mine yesterday and I used my last clove about a week ago. 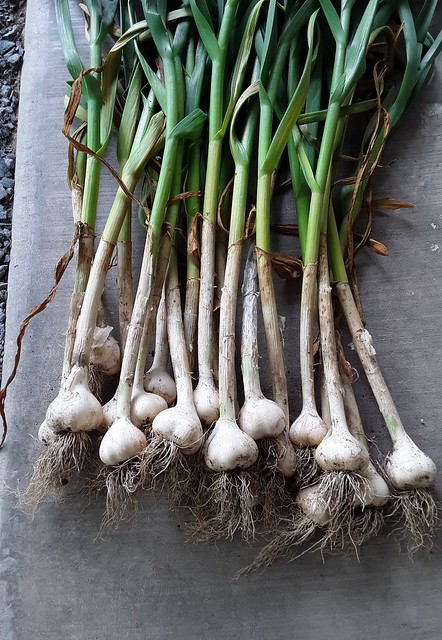 I may be digging the rest of my metechi today, depending on whether it looks like the possible TSs are headed this way. Looks worse tomorrow, but I'll see. Radar shows it today, too. Much better dug up from dry ground, and we have had no rain for a while!
0
Woodbury, NJ zone 6B-7
Top

I harvested the Metechi today - I went out when I saw the noon news, and the radar showed a major storm coming through my area, and it looked like around 2:30 it would start. Took me about 45 min. to harvest, clean, and ready them for hanging. By the time I got in, it was really dark, though it hasn't rained yet. By the time I got in there was a severe TS warning for a large area, including my area. I hear thunder, but no rain, yet.

Here is a funny looking one I pulled up - happens about once every 5 years or so, when a clove gets planted upside-down. Usually, they don't grow this large. 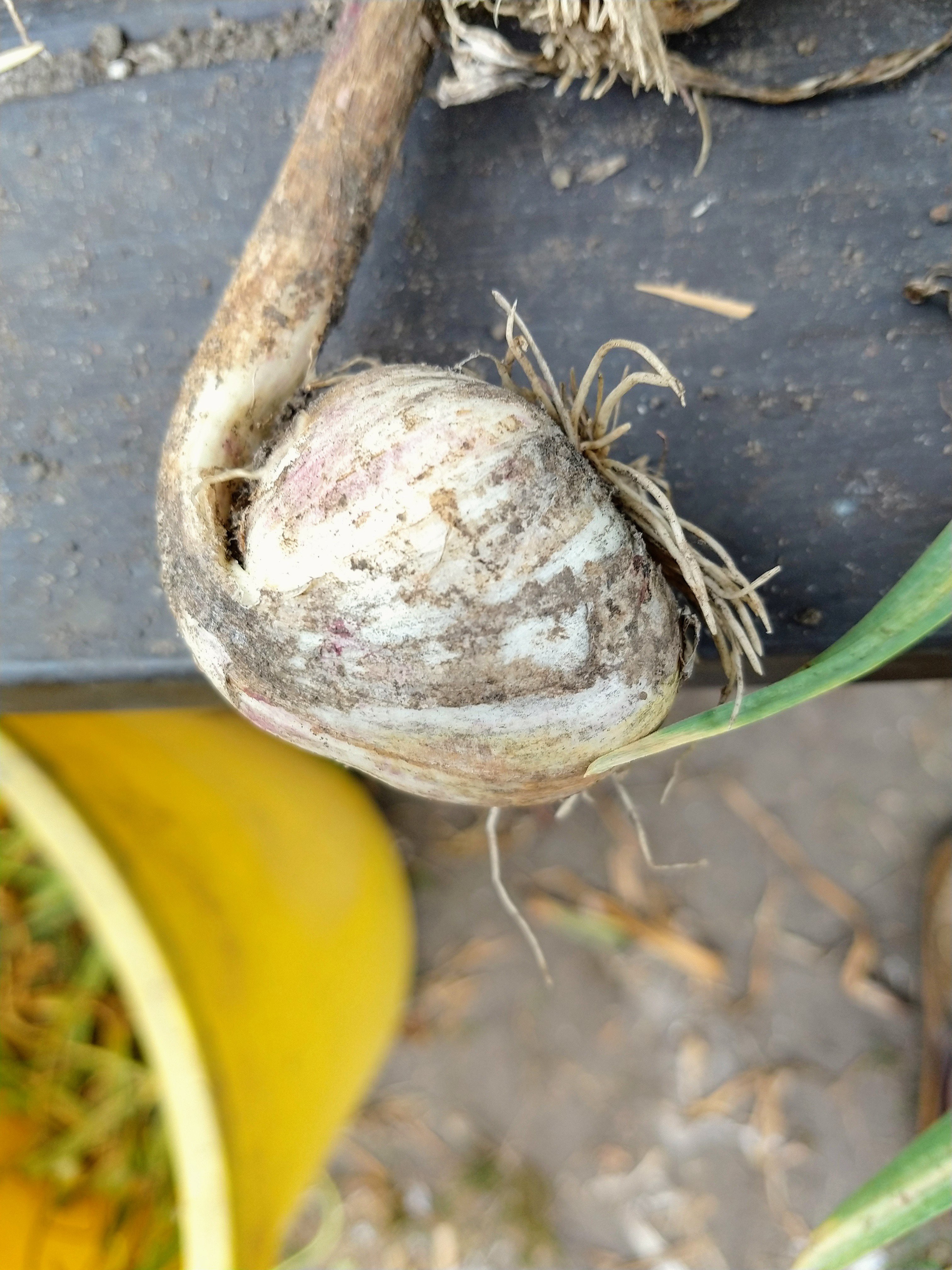 Metechi - Clove was planted upside down! by pepperhead212, on Flickr 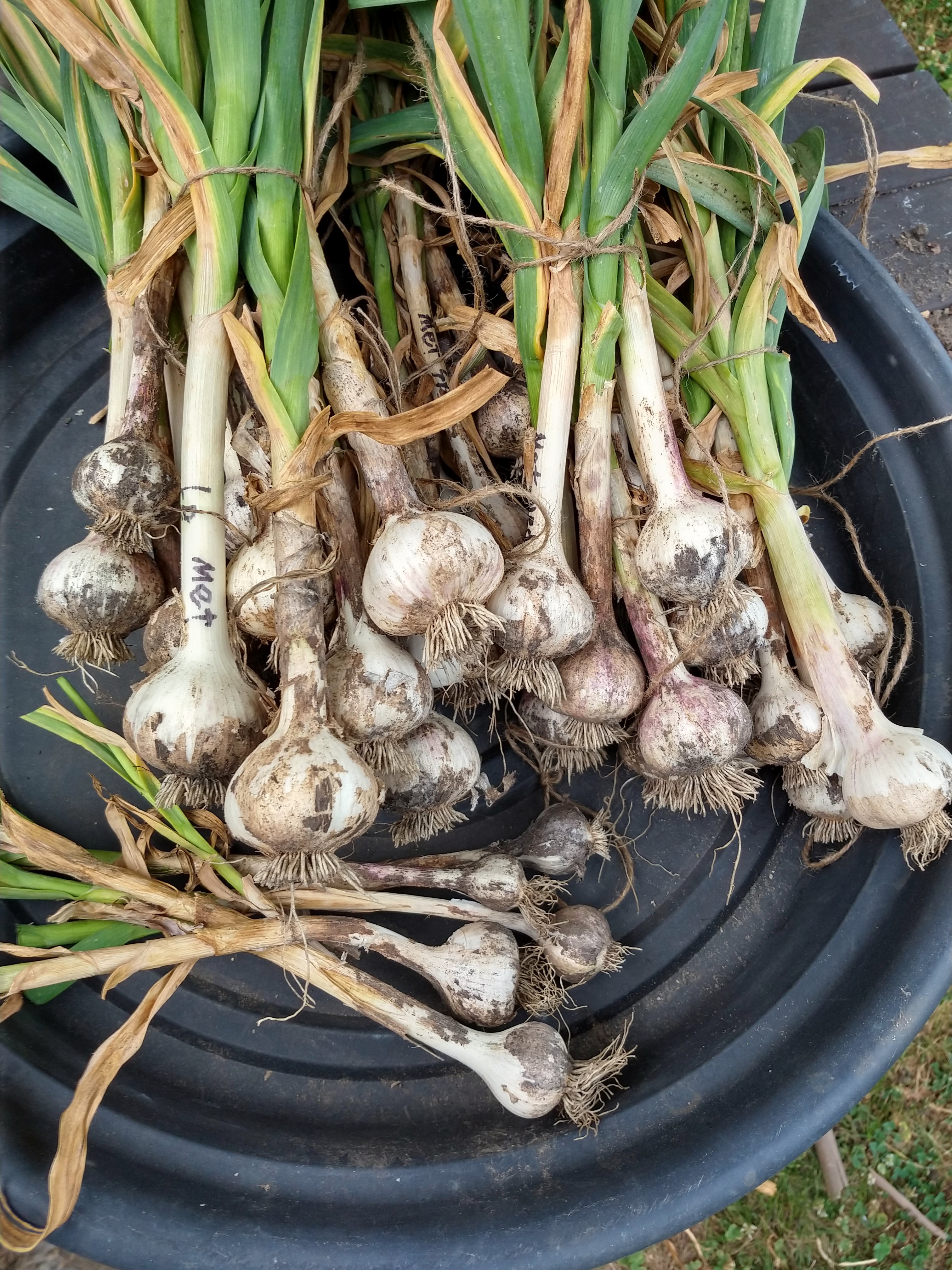 Update: they said around 3 pm, and that's almost exactly when it started! And now it's coming down by the bucketfulls! It's up to 92", last I looked, about 15 min. ago. So I'm lucky I pulled the garlic, even though much of it could have grown a little more.
1