These types seem to thrive in warmer weather, check mark for that, I’ve got that here in spades. They also apparently need longer growing seasons, good for me.

So far, I’ve only grown South Anna Butternut and the Thai Rai Kaw Tok Pumpkin. I love their sprawling nature and big and bold yellow blooms. Still waiting on getting any actual production, but one butternut is close.

So I know there are many other of these moschata types. I want to add one or two additional moschata squashes next year. What are your favorites?
0
Zone 9a/b, right on the line, in the heart of the Columbia bottomlands. Heat zone 9, Sunset Zone 28, annual rainfall 52”
Top

I grew a bunch of types this year. A major appeal for me is that they are pretty much immune to the squash vine borers that usually take out any C. Maxima varieties I've planted.

I grew two types that are known as Korean zucchini that are actually for eating immature. These were okay, but not really a flavor replacement to zucchini as far as I'm concerned. I grew both a long zucchini shaped one (less productive) and one of the "Avocado squash" types that was more productive.

Like you, I'm growing South Anna and have been harvesting them for a little over a month now. Perhaps I should be letting them stay longer on the vine, but I've waited until they've turned tan for a few weeks and the stem is starting to brown. I'll be curious what you think of them since I liked it for production and plant health, but they weren't as rich or sweet as I expect from a butternut type. I know it is part Seminole, but I thought those were supposed to be sweet, so not sure why the flavor is a little less than I expected. I understand these aren't fully stable yet and each of the three vines I'm growing seems a bit different, so perhaps one of the other vines will have better-tasting squash. I doubt I'll grow these again unless they get a lot sweeter after long storage.

I'm also growing Tahitian Melon, which are big, although mine aren't the 30 lbs monsters I've seen people mention. Mine have a bit thinner necks than some I've seen pictures of and one of the three I'm growing is off type and putting out jumbo butternut squash, instead of long-necked squash. My seed source was Southern Exposure. I expect the one plant that isn't true is a fluke since I gave seedlings to several other people who are getting large crook necked squash. I have harvested a few, but haven't eaten any yet although I'm looking forward to trying it. I'm getting at least 6-8 squash per vine and I've given a half dozen to the food bank and another half dozen to friends and family.

A surprise runaway success for me has been Autumn Frost F1 (seeds from High Mowing), a butternut type, which has been putting out over a dozen 2-5 pound squash per vine, maybe more. It is hard to know for sure since it is along the fence at the community garden and at least half have been harvested (stolen) by people walking along the bike path next to the gardens. It is productive enough that I'm still getting plenty for myself so I'm less annoyed with that than some of the other theft. These squash have a really rich, sweet flavor and are not stringy at all. If I had any complaint it would be that the shape is very variable with only about 20% turning out like the chubby little butternut shapes in the seed listings. Most of mine are round or like a blocky ribbed pumpkin. As long as the produce like rabbits and taste great, that is a small gripe.

Finally, I'm growing Honeynut butternuts. These are wonderful little squash with fabulous rich/sweet flavor. I only have 2 squash eaters in my family, so these are just the right size for a single meal. They are shorter/smaller vines as well, which is nice for keeping them under control, but I have noticed they succumb to the various mildews, etc. faster than other squash.

I would love to hear what you think of the South Anna when you get one to taste, as well as the Thai Rai Kaw Tok Pumpkin which sounds really interesting as well.

I'm looking at some of the smaller crook-neck strains to try next year as well. I like the idea of all that dense edible flesh in the neck to cut rounds from and put on the grill or roasting. I'd be curious to hear if people have any other crook neck suggestions. I'm also tempted to try butterbush, which I have heard very good things about in terms of taste, but I've also heard they get more mildews, etc. like the honeynut.
2

@zendog That Autumn Frost sounds promising! I'll be curious to see how well they store. The Honeynuts, the time I tried them, only lasted about 3 months, and they started softening.

I can only grow moschata squash, due to SVB, and I have tried a number of them, through the years. The best butternut that I have found is Polaris - a hybrid I get from Pinetree, which produces 7 or 8 good sized (3 to 6 lbs, sometimes more, occasionally smaller) squash per plant, earlier than most, while many produce 2 per plant, and that's it! And a main advantage with these is that they store well. I've had some that start softening after 3 months, while these last a year or longer, in most cases.

I tried two new moschata varieties this year - I also grew South Anna butternut, as well as Yuxi Jiang Bing Gua (this was supposed to be harvestable as a summer squash, but that didn't work out). Both of these seem to be the 2 per plant type, and fairly late, but the butternut might have more, but not mature - I'll find out when I figure out if the butternuts are on very long vines, not the polaris, which produced some much earlier.

I posted this earlier on my thread:

I got some of the larger winter squash a few days ago, along with a small one, on the early variety. The largest yuxi is 10 lbs, 6 oz, while the largest butternut is 8½ lbs. 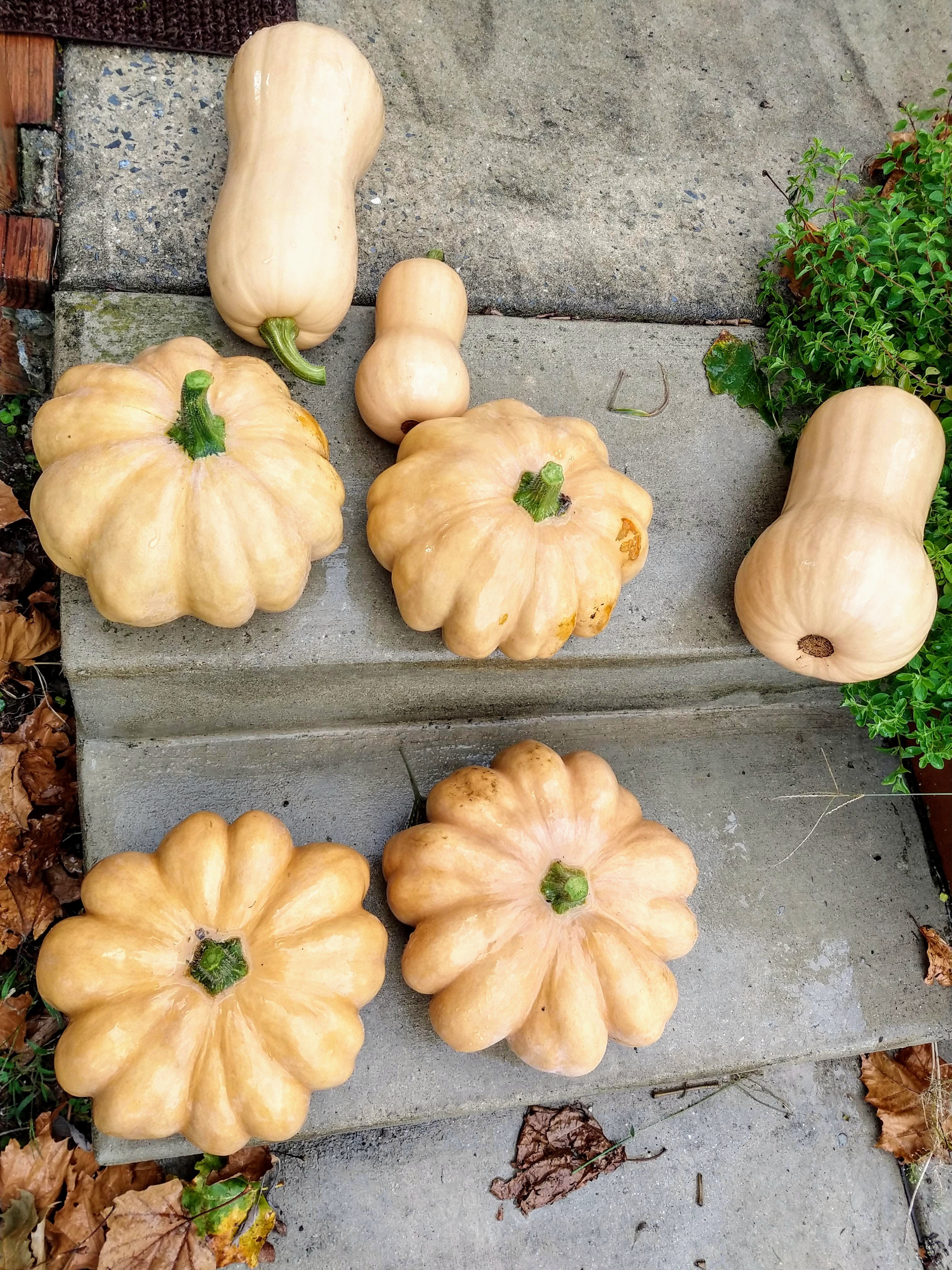 Hands down, Tahitian Melon Squash. I average 3 squash at 14 lbs each per vine. Unblemished ones can last until next May. It's the sweetest moschata that I've trialed.

That said, I like the taste of maximas and a few pepos, better.

And, of course, the maxima / moschata cross, Tetsukabuto.
1

This is my first year with South Anna, but I've had two go bad already - the largest and the smallest. I still got 38 oz of diced squash from the large one, but all of the seed end and about 1 1/2" of the neck were gone, and it didn't look that bad on the outside. Usually I find butternuts with small bad spots, and I can save most of them.
0
Last edited by pepperhead212 on Thu Jan 07, 2021 12:57 pm, edited 1 time in total.
Woodbury, NJ zone 6B-7
Top

I haven’t eaten my South Anna yet. They look good still.