I know it’s not much, but I’m the only one who eats them, so I don’t grow to many plants, even though I saved a bunch of seeds last season. I’m going to slice these up and pickle them, so they don’t go to waste.

Great melons, @roper2008! What variety is that? I tried one of the Indian varieties last season, but it was wiped out by fungal disease, from all that rain. I have 3 plants this season, and just saw the first one the other day, though it's small. They are loaded with flowers, though, so I'll have to pickle some. What's your recipe for that?

First Bitter Melon. 7-23 Not sure which variety, as the vines are all woven together. by pepperhead212, on Flickr
0
Woodbury, NJ zone 6B-7
Top

Thanks, it’s Ganjyu. I bought the seeds from Baker Creek. It’s a Japanese variety. I picked it because I like the way the bumpy ones look. Some of my plants have leaf spots on bottom leaves, but the rest of the plant looks fine. The humidity doesn’t seem to bother them too much, but they do have to be watered every day in this heat. The pickle recipe I found on the internet few years back.

I've never eaten one, but I would like to. They look so much like sea cucumbers, I find them unappetizing in appearance. I'm not a big fan of licorice which I consider bitter. How do you prepare bitter melon to eat?
0
Top

Your supposed to put 1 tsp salt on the sliced bitter melon, let it sit for awhile and then rinse.

Donnyboy, bitter melon doesn’t taste good, at least not to me. I grow it because it’s healthy for
you. In Asian countries they grow up eating bitter melon, so they like the taste. I don’t eat a
whole bunch of it, but I try. I usually just stir fry it in an omelette with onion, pepper, and tomato
from the garden. I don’t soak mine to try and get the bitter out of it..oh, and it does not have a licorice
flavor.

Maybe pepperhead can tell you how he eats his. By the way pepperhead, your bitter melon plants look really
nice.
0
Top

Thanks @roper2008 - I remember seeing that Ganjyu in Baker Creek, and was surprised that it was Japanese. That's where I got one of mine: the "pure white" variety. I think I have one out there, but I'm not sure...the seeds were not germinating well, as usual, with BM, but I eventually got some to sprout. And it took a while for them to grow, but when they finally took off, boy did they take off! like indeterminate tomatoes, with those suckers at every branch, these start a new vine at every branch! It's hard to believe that such a small main stalk can support so many vines! My BMs are all in SIPs, and here's one, showing how small it is at the base: 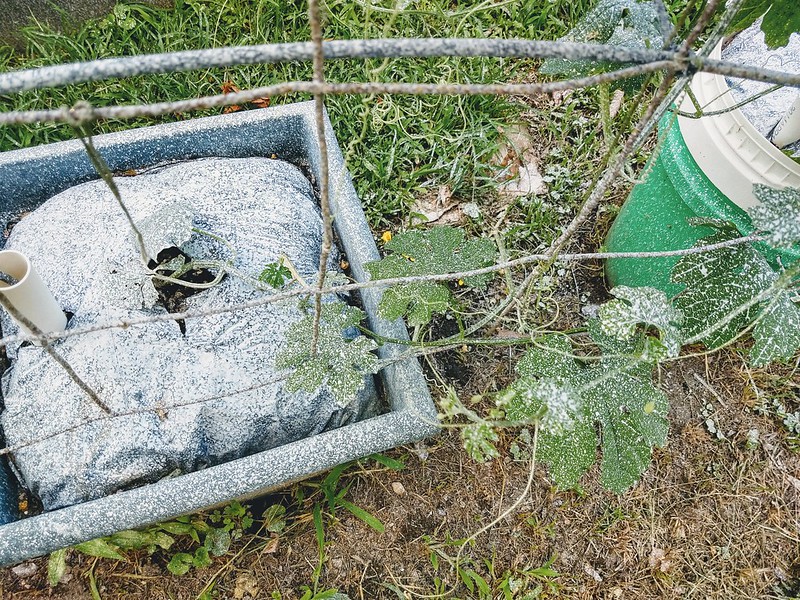 Here is a view, showing it on the trellis, and growing above the trellis! Another unusual thing about them is that it is sort of hard to distinguish between the male and female blossoms - the females have long, skinny stems, like the males. 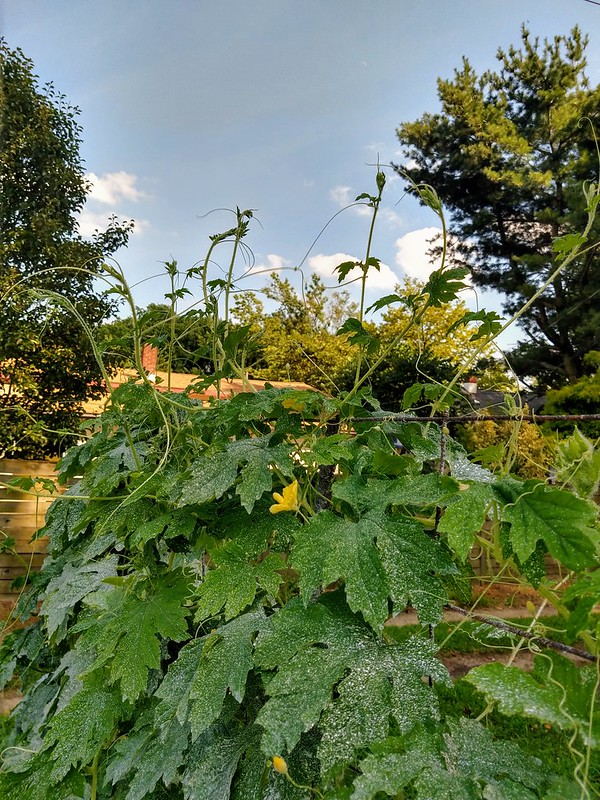 Those vines can be rooted - I put them in my cloner, and they had roots in 4 days! I don't really need any more plants, just did it to see if I could!

I thought that was strange that you grow them, but don't like them! They are an acquired taste, I'll admit, but I like a lot of strange things! LOL An Indian lady I know want's to try them (she's heard about the possible benefits for blood sugar) - never ate them or the bottle or tinda gourds I gave her before, and here I'm growing them, and I'm not even Asian!

The Indian BMs tend to me more bitter, and are usually the pointed kind, like you have. The kind I have are usually found in China and SE Asia, and tend to be less bitter, though the Indian type I had last year (Green Giant) seemed even less bitter than previous types I had grown, at lest the few I got before the diseases brought it down. And if they get ripe, they really get bitter! Something strange happened the first year I grew them - after getting a huge number of them before it got really hot out, they started getting orange, around the middle of July while very small, like 5" or so, and never came back to producing. I thought that it may have been a length of day thing, or something like that.

I have used a lot of these in SE Asian dishes, which usually have some sugar in them, to balance it out, plus often just one of a number of veggies in a dish. I put some in Thai curries, as sort of a replacement for the pea eggplants - a.k.a. "bitter eggplant", which are often put in Thai curries. Indian cooking doesn't have as much sugar - often just the sour and or bitter components, but I usually put some in. Some of the sabzi (dry curries) I've made with BM have some caramelized onion, which adds a good flavor to it. Some recipes call for peeling, which is where much of the bitterness is, in addition to the pith, but the Indians have recipes using just the peel! Not something I've used before.

@Donnyboy You definitely want to try these, before deciding to grow them!
0
Woodbury, NJ zone 6B-7
Top

Didn’t know they could root like that,interesting. I saw that white bitter melon, and almost purchased it.

Yes, it’s true I don’t like bitter melon, but eat it anyway. I’m not Asian, but was introduced to it from Filipino friends. Usually extra’s I give away to them, but some of them want the leaves.

I don’t peel mine/soak or blanch them before stir-frying. I feel like, but don’t know for sure, that a lot of the benefits is from the bitterness. I’m also not really talented in the cooking department, I can cook some things good though if I follow the recipe.

You know I love to grow peppers, I could be pepperhead2. This summer is the first year I’m going to actually try fermenting some. I bought a few things from Amazon for it. I usually just dehydrated, pickle, freeze, make pepper jelly, and eat them fresh.. Today I’m going to make cowboy candy with my Jalapeños, never made it before but sounds good.
0
Top

I grow a lot of normal cucumber varieties. Some germinate quickly in the soil and some germinate and produce later. "Straight Eight" variety germinates and produces later but is also the most reliable to germinate and produce. I harvest the straight eights before they reach full size and before the weather gets really hot. When heat arrives, straight eight becomes very bitter and we can not eat them. I have a couple of gardening buddy dogs who love cucumber. When we go to the garden in the morning, I pull a large cucumber, cut it in half and let the dogs share it. When they start spitting it out after taking a bite, I know they have become bitter and stop harvesting them. One year, I was cleaning my garden in late fall, I discovered a large, melon like; straight eight I had missed harvesting. It had turned bright yellow as some melons do, but it still had the cucumber shape. I cut a piece off and tasted it. It had become very sweet like a ripe melon.
0
Top

The bitterness might be cucurbitacins (which are bitter). They can be good in small amounts, but are a toxin. I'm not sure if that's what's causing the bitterness in bitter melons, though (there's probably more to it, or people probably wouldn't eat them).
0
Location: SW Idaho, USA
Climate: BSk
USDA hardiness zone: 6
Elevation: 2,260 feet
Top

Ooh, those looks beautiful!
I'm Vietnamese and my parents likes to cut them in half width wise (not lengthwise), spoon out the inside well, and stuff them with a mixture of ground pork, woodear mushrooms, and glass noodles. Then they are cook in a broth or water seasoned with fish sauce and lots of black pepper, topped with green onions and cilantro. I could never get over the bitterness of the melons themselves but the slight bitterness they impart onto the filling and the broth is interestingly yummy. My parents loves them and the dish is called "khổ qua" which can be literally translated to "passing of difficulties", so they like the metaphorical side of that as well.

Another way you can cook them is to cut them length wise this time. Again, get rid of the inside seeds and white pulp, which is the most bitter. Slice them thinly, and stir fry with salt, pepper, and soy sauce. Near the end, crack in a few eggs and scramble them with the melons and they're done! They're are still bitter and is an acquired taste for sure, but hey the best medicines are always a little bitter (?)

That's funny about the name of that dish, @fluffy_gumbo! There are a lot of names like that in dishes in Asian cuisines, as well as everyday sayings based on foods.

I picked my first bitter melon today, and saw the first of one of one of my white varieties. Plus I saw a number of new ones forming. 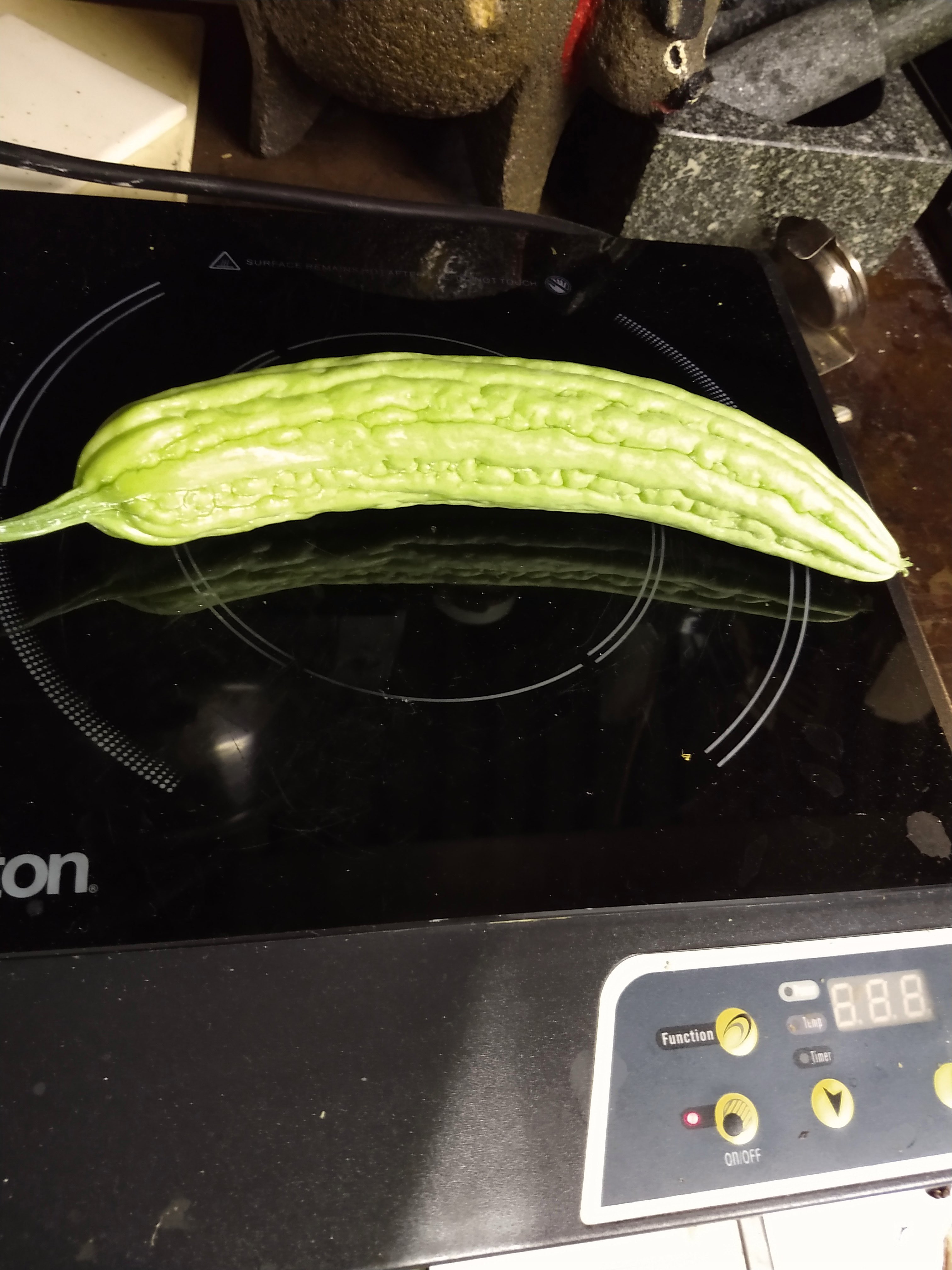 I finally harvested that white one. Never had one like that before, as the seeds are supposedly edible, while the seeds and the pith are extremely bitter, in most. 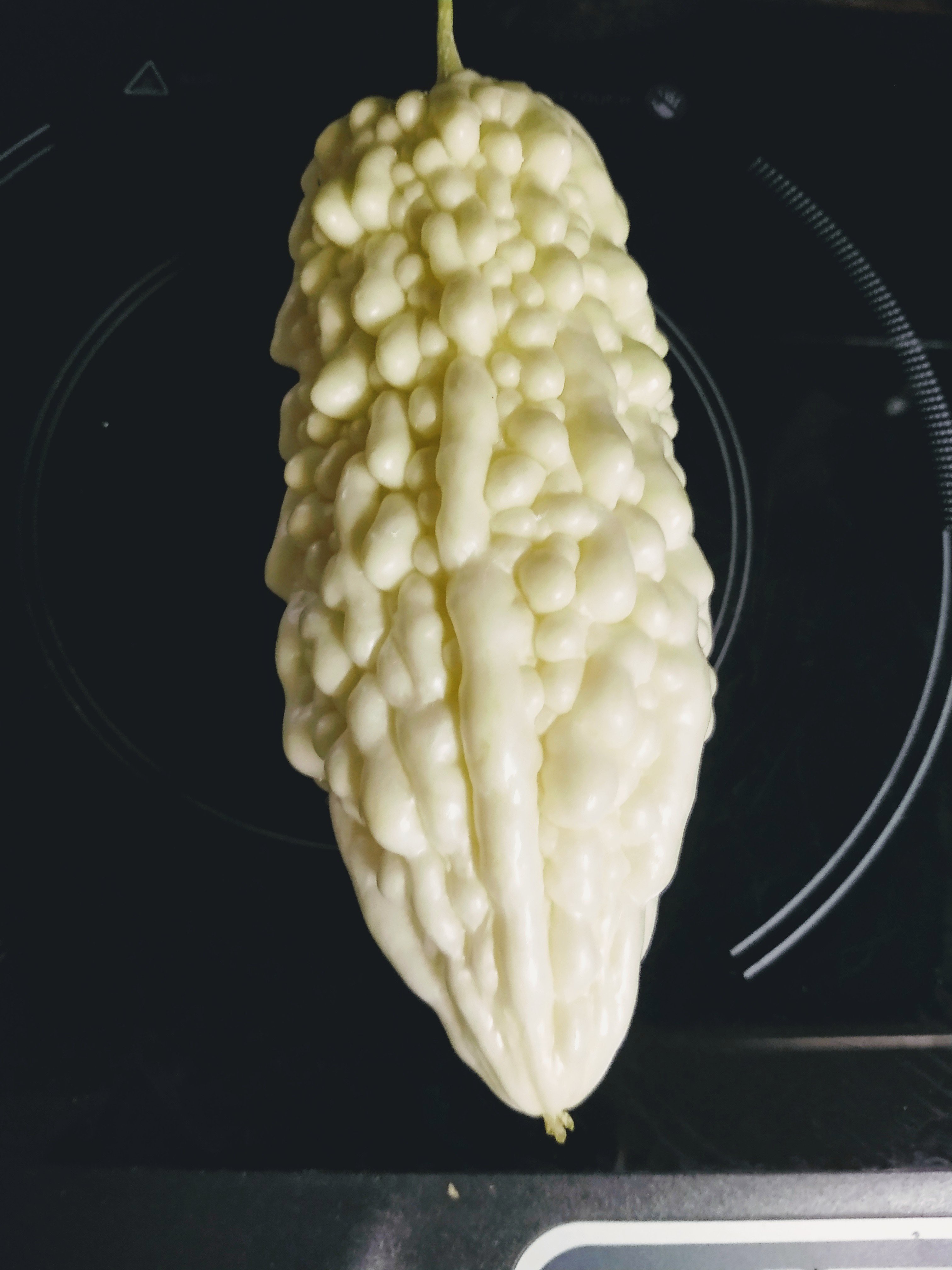 I just harvested another green one today - at least 3 more greens, and a couple half sized whites, along with a bunch of much smaller of both. I have to figure out what vines are what, and bag some blossoms, so I can save some seeds! I also have to find some recipe for pickling these, and putting in jars - all the recipes I find are for refrigerator pickles. 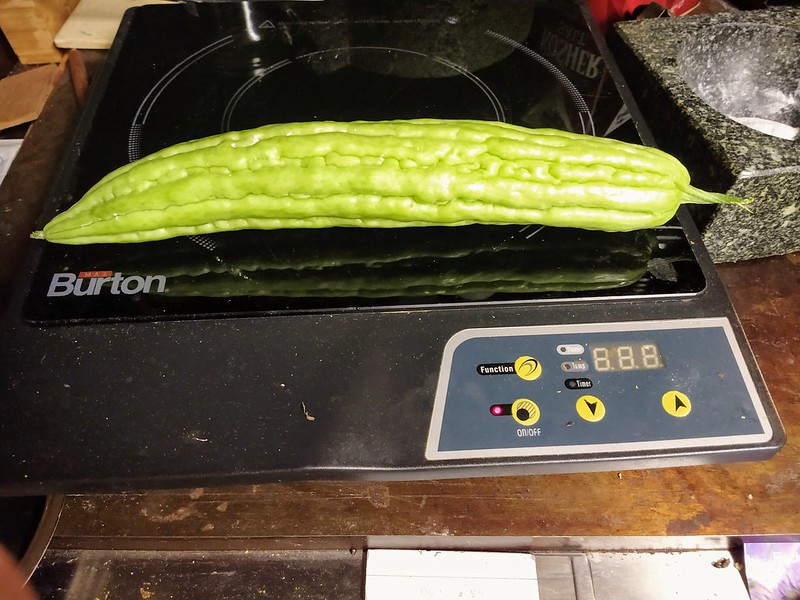