The Garden of Woz...

Thank you and I really appreciate the offer but I'm afraid the SVB would make a mess of them. Once I somewhat start winning that battle I might take you up on it!

No problems, let me know down the track if you want them
0
Top

This is a first time grow here, picked this one for dinner tonight, 25.5 oz or 723 grams

Nice! Lucky you don’t have pickle worm to contend with.
0
“Never try to outstubborn a cat.”
- Robert A. Heinlein
Top

Your garden is wonderful and I always enjoy seeing it.
Your Goodoo is awesome whether it is a dwarf or not. I hope that you can keep that one going. What a fun challenge you have on your hands.
1

Thanks for the kind comments Miss

As I have said in the birthday thread, Saturday was spent at the local garlic festival where I picked up the following clones

And one of the Elephant garlics,
Johnson Creek Giant Garlic. This has been grown on the one family property for 3 generations, so around 60 years or more. The seller is granddaughter of original planter and she has been seriously growing it for five years and has the biggest globe up to nearly 5 inches across.
3

Tomatoes are coming in properly now, but due to rain (230 mm since start of the year) some are splitting badly and taste is washed out. Only had to run the pump 3 or 4 times this year, will shortly pack up soaker hoses. Photos to follow as I get the time.
1

Two of KarenO's creations to start with, Polaris, which ripened about a week ago, still holding beautifully

and Midnight Sun, two plants of which are growing and loaded up with fruit

Picked a number of these now, loved by all who have eaten them, all good size, topped by this one, 19.45 oz

And for those used to metric

Whwoz wrote: ↑
Sun Feb 16, 2020 4:39 am
And one of the Elephant garlics,
Johnson Creek Giant Garlic. This has been grown on the one family property for 3 generations, so around 60 years or more. The seller is granddaughter of original planter and she has been seriously growing it for five years and has the biggest globe up to nearly 5 inches across.

Some variety of elephant garlic has spread itself around my garden. I thought it was a leek (it is) and I used it as such cutting the tops rather than pulling, allowing the bulbs and bulbils to grow aplenty. Unlike regular garlic EG multiplies through wee bulblets at the base of the large one and through seeds. If left in the ground over winter the seeds hang on until spring when they sprout on the flower structure and drop to the ground to grow. I tried saving seeds last summer but there were few that were ripe enough at bulb digging time.
At one point I had hundreds of them in the ground but have given away lots of bulbs and am down to a reasonable number now. They grew well with little attention wilding themselves in here and there. Insects and hummingbirds like the flowers.
1

Spent the morning turning 8 lb of cucumbers into relish today. Old family recipe that goes back to the German part of my ancestory.

Eleven jars in total, will put the plastic lids back on the jars for storage
1

The Gold Rush x Jade Numbat Zucchinis cross plants continue to yield well, recently grated a batch for fritters, one of the larger zucchini had seed showing quite clearly

After seeing your pictures I’m really looking forward to my Polaris fruit.
0
“Never try to outstubborn a cat.”
- Robert A. Heinlein
Top

One thing that kept me busy for several days was about 20 kg of Green Gage plums. These are one of the best tasting plums, but they don't hold well. Most went into bottles with 8 lb of jam to clean up the ripest of them.

Finally was able to clear the books I enough to pick all the tomatoes today, some of each of KarenO's creations with the exception of Midnight Sun, the two different Duncan's from last year and a range of others. Pulled half a dozen plants that were not doing well or producing fruit that we don't like.

Of the KARMAS, KARMA Pink is struggling, certainly does not do as well here as I have heard/read others description of its growth and fruiting, KARMA Peach is reasonable and KARMA Purple and KARMA Purple multiflora are really doing well, solid plants producing a good amount of fruit.
Polaris ripened it's second fruit and Tiara it's first, looking forward to the Midnight Suns.
1

Mat-Su Express ripened it first fruit on each plant (2 in), both of them from megablooms.

For those who remember my thread on TV, I was given a plant called Duncan's by Mcsee, Mine turned out like San Manzano, one he gave to a different friend was a large pear and the one Mcsee grew himself was more like an egg. Have grown the egg and pear this season.

This is the pear albeit with a couple of extra bits, around 200 grams/7 ounces.

The first of the eggs to ripen. Not weighed.

Blush, picked up fruit and saved seed in Tasmania last year. These are ripening nicely now

No slack time for you, that’s for sure.
0
“Never try to outstubborn a cat.”
- Robert A. Heinlein
Top

Whwoz wrote: ↑
Fri Feb 21, 2020 5:29 am
Spent the morning turning 8 lb of cucumbers into relish today. Old family recipe that goes back to the German part of my ancestory.
DSC_1143_resized.JPG
Eleven jars in total, will put the plastic lids back on the jars for storage

Whoz, as alway,s everything in your garden (and kitchen) looks fabulous!

Intrigued by those plastic film tops. How is your relish preserved (fermented)? Acidic with water bath canning (but then I don't understand the plastic)? Thanks for clarifying!
0
Gardening near Philadelphia (USA)
Top

I'm loving this thread, but have to ask, why are all the pictures fuzzy looking? Every time I look at a pic I have to rub my eyes thinking it's my eyes. lol.

I think this guy looks better with a monocle. 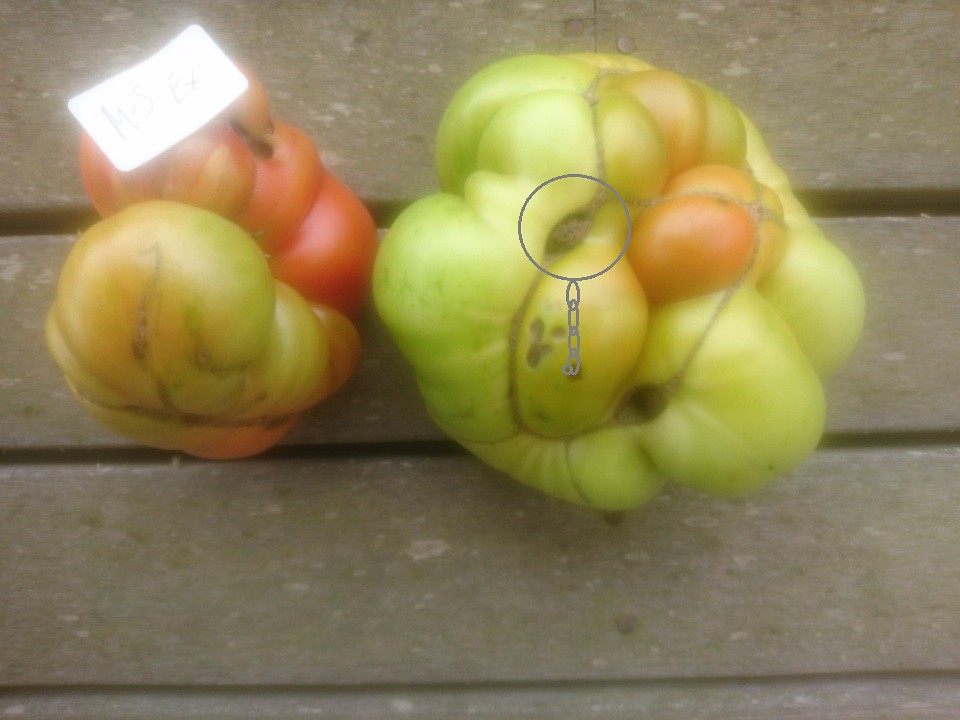