The corn thing happens every year. Fortunately the corn wasn't very tall and is easier to stand up. Better now than when it's tall and starting to pollinate! But sometimes you can’t win for losing. Yesterday I got all the flattened Silver Queen stalks standing by pulling them upright with a hoe and gently firming the soil around them with my foot. Now today a stiff breeze is coming from the other direction and pushing a few of them over the other way! This evening after it cools off I’m going to fertilize and hill up the rows.

The Spring Treat stood itself up, a bit curved but no worse for the wear. That process always amazes me. 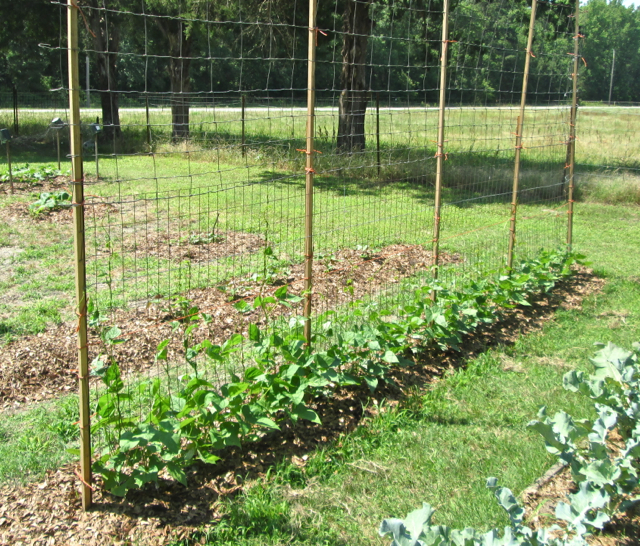 This is a shot of the whole garden which runs all the up to the grape fence and was taken pre-corn flattening. I love watching it change and evolve!

It's been Deer Deterrent Day. There are good years and bad years as far as deer pressure goes. For whatever reason this has been one of the bad ones. 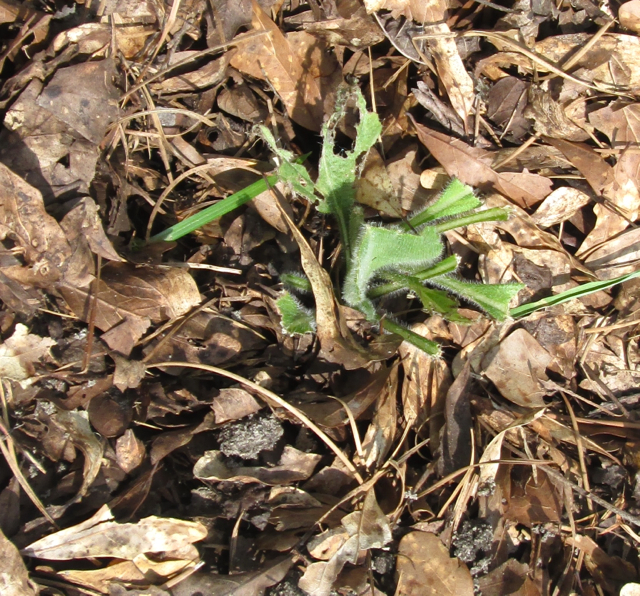 I opened up two tomato cages and put them tunnel fashion over the coneflower bed. 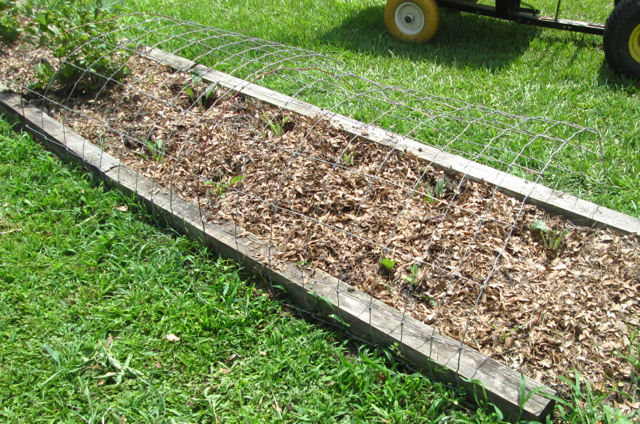 Then I put tomato cages over the three Roselle plants and staked them in place. That should work for a while. 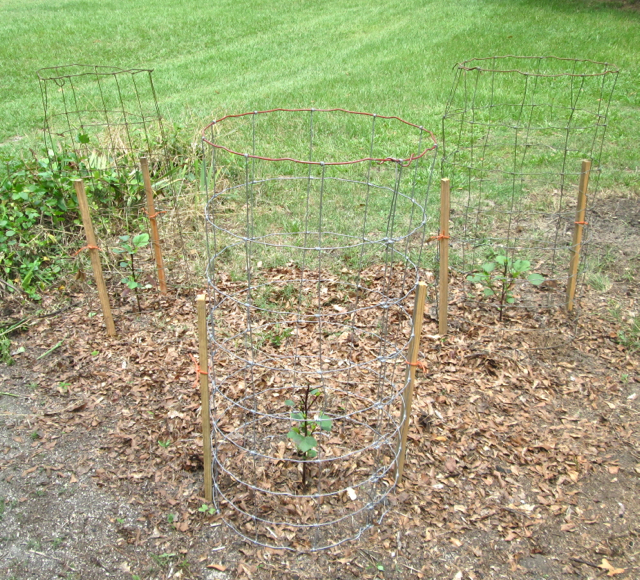 We've got hit and miss showers this afternoon. It figures. I watered everything yesterday. Oh well, it can always use that nitrogen-carrying rain!
1

The deer are a big problem here as well, so bad in fact that I had to move to a community garden. I still have my perennial garden which is fair game for the deer. They are horribly bad this year, even eating the daffodils. People here are now using fishing line strung over the tops of plants to deter them. Supposedly they don't care for their noses being interfered with.
0
~ Patti ~
AKA - Hooper
Top

Back in 2015 I tried the fishing line thing by stringing four lines of 20lb test on each side of a pea bed something had started nibbling on. Then I set up the game cam. Mr. Buck paid no attention to the fishing line and just ripped it out of his way. It was a waste of good fishing line! 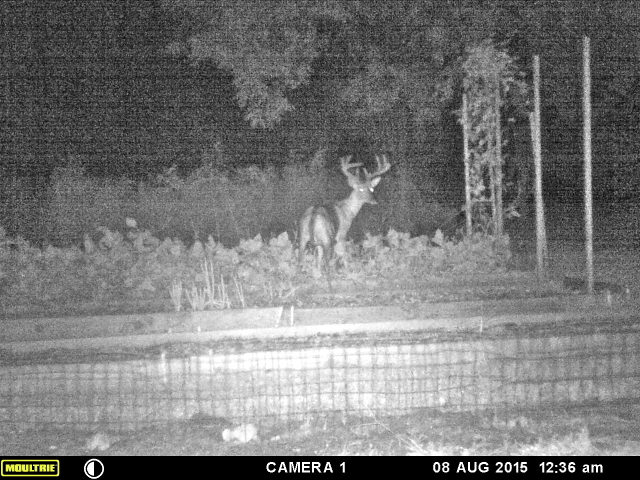 Mixed putters today in the garden. Some fertilizing, weeding, hoeing around the popcorn plants, etc. I had a cucumber plant left over and couldn't bear to just throw away a perfectly good plant. I put up another trellis on the end of a bed, stuck the cucumber in there on the left side side and planted a few yellow squash seeds on the right side. It should be interesting.

Something's going on with the spaghetti squash. I've looked at a bunch of disease photos and I can't match it up. Maybe it's nutritional? Shout it out if you know what's going on or even have an idea I can chase down! 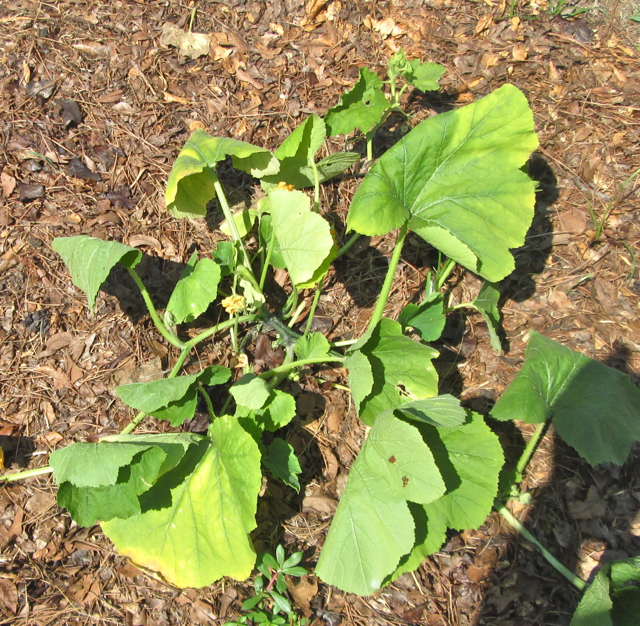 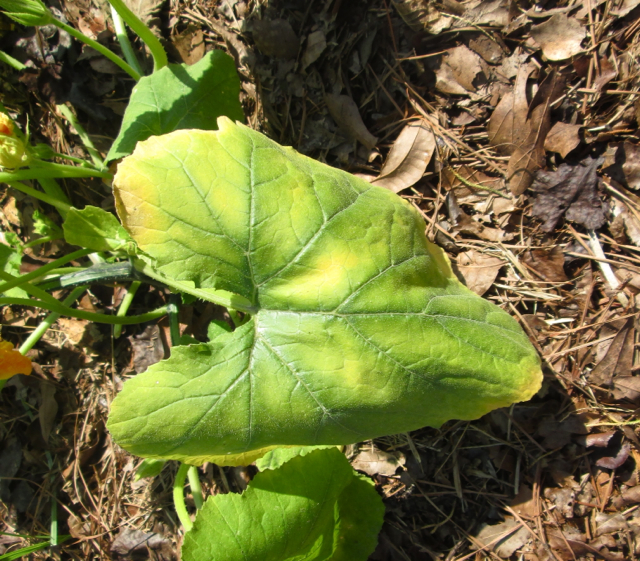 The good news is that the Spring Treat corn picked itself up after being blown over. Although it's a bit curvy, it's putting on ears. It won't be long until the first corn of the season is ready. It's a 67 day, 5' or so corn and I really pushed the envelope on planting this year. It went into the ground on 4/7 during a warm spell, popped up 4/13 and then made it through a few chilly mornings. I'm hoping the ears fill out because the corn was pollinating when it went down. We'll see. 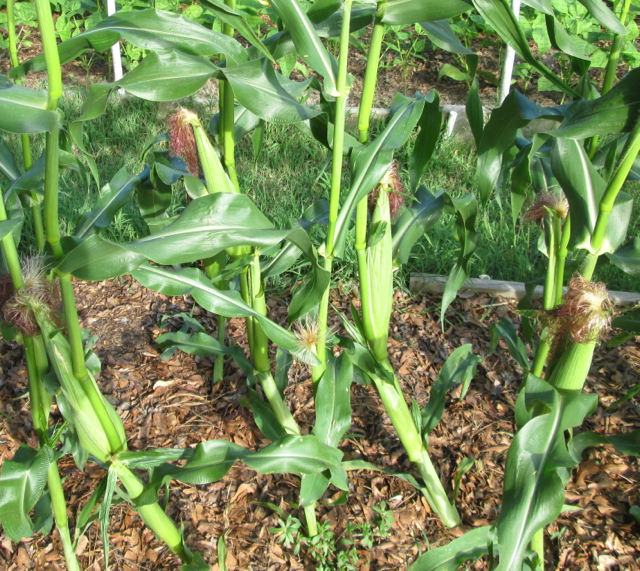 It looks like you may have the squash vine borer. It penetrates the stem and eats it from within. This makes it impossible for the plant to move nutrients out to it's further limbs. It's very hard to treat once it is living within the plant.
0
~ Patti ~
AKA - Hooper
Top

That corn looks like it made a nice comeback
0
Wet and windy side of a Hawaiian island, growing in ground in the summer and in pots in the winter.
Top

I agree that it's probably the dreaded SVB on the squash plant. Look at the stem near the base for a hole with brown sawdust looking stuff coming out of it. That would be SVB poop aka frass and once the plant totally wilts they are done for.
0
Top

The first thing I checked for is vine borer but found none. No hole, no frass. I even checked a little below the soil line too. Usually when the borer hits, the first thing I see is a droopy leaf. I think I have some iron in the garden shed. Can't check pH right now though as I'm out of testing stuff.

On the good side of things, Pickles just walked in with the first two National Pickler cukes of the season. 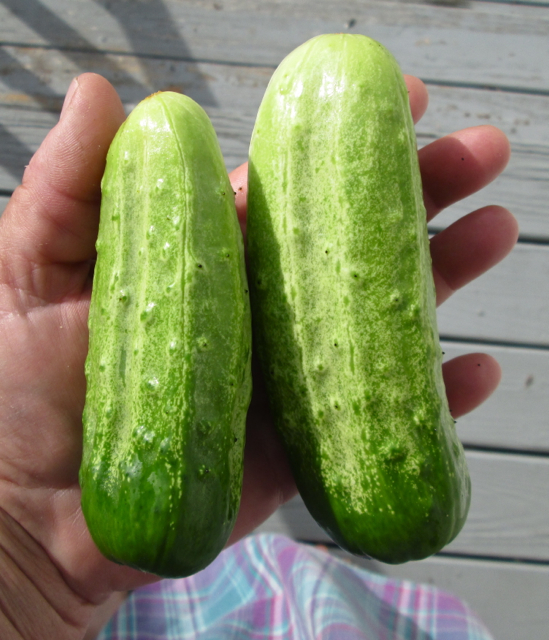 They will join cherry tomatoes (from the four micro plants), carrots, cabbage, scallions, kale and turnips on the "don't have to buy" list. Life is good.

Nice cukes!
I feel for you, @GoDawgs , if you are having a war against the SVB. Hopefully, that's not it. I simply can't grow the prone species here, and believe me, I've tried every trick. I'm trying a new moschata variety this year, from Baker's Creek - Yuxi somethingorother - that says it can be used as a summer squash. I'll find out. I also have two more new Indian gourds, to try out.
0
Woodbury, NJ zone 6B-7
Top

My veggie garden is at the Community Gardens. I have heard that planting squash later avoids the SVB breeding season. I am therefore planting my squash a little later than everyone else to try to avoid the SVB problem. I do hope it works.
0
~ Patti ~
AKA - Hooper
Top

MissS wrote: ↑
Sun Jun 07, 2020 1:07 pm
My veggie garden is at the Community Gardens. I have heard that planting squash later avoids the SVB breeding season. I am therefore planting my squash a little later than everyone else to try to avoid the SVB problem. I do hope it works.

I've heard that too. I'm going to just pull that plant out. The discoloration isn't getting any worse on existing older leaves but is gradually showing up on younger leaves. No sense wasting time trying to fix it. I've started a new plant.
1

We just had a t-storm sit over us for an hour, throwing down bolts waaaay too close. And the rain gauge says 3"!

I can't bear to go down and look at the corn. It's just recovered from the last blow down. I had pulled soil to the stalks, put some ammonium nitrate to it and this afternoon it was looking good at about stomach height. Tomorrow morning will tell the tale.

That spaghetti squash plant that was discoloring was pretty all yellow today so I dug the thing up to look at the roots. Yep. Nematodes. Corn grew there last year, followed by cow peas and there were no problems. They don't like corn so maybe they starved enough that they left the beans alone but now they're back. Who knows... 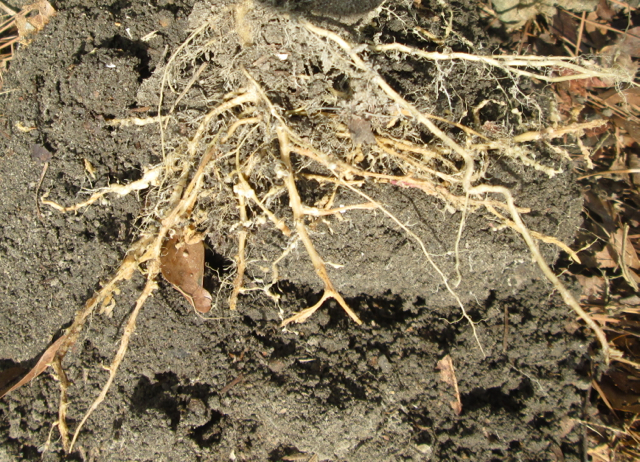 But on the brighter side I saw the first two baby German Johnson tomatoes starting. It's an old OP beefsteak thought to be one of the four heritage lines for Mortgage Lifter. Something new to me and they look like they have a lot of ridges. It's definitely fun growing new things! 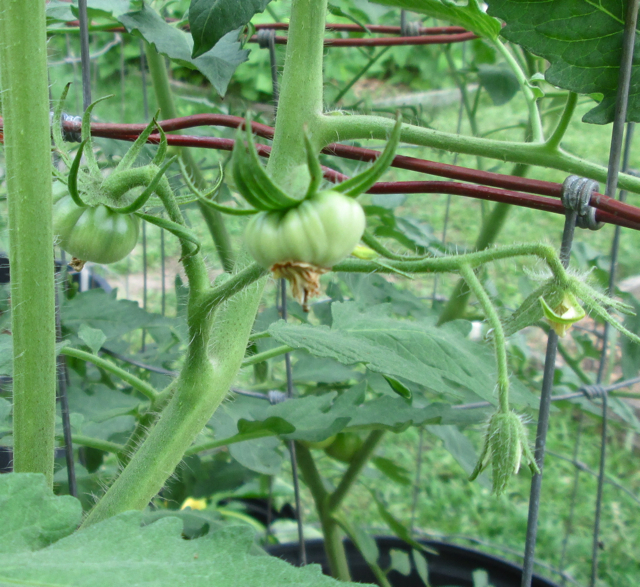 Got a dozen Yaya carrots this afternoon. They were planted for the first time last fall, did well and so were planted again this spring. They all seem to be about 4-6". I hope they don't start splitting with this 3" rain dump. 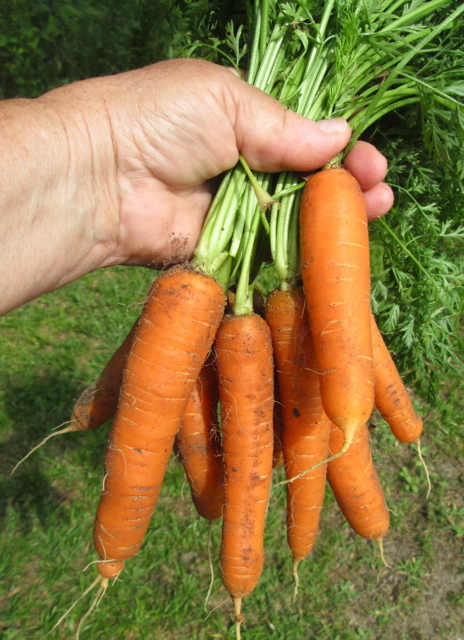 And finally, the Volunteer Brigade. They self-seeded from a pack of mixed wild flowers I planted in 2017. The pack was a freebie given out by the Georgia State Highway folks and every year they re-seed themselves some more. The pollinators like them so they'll stay. 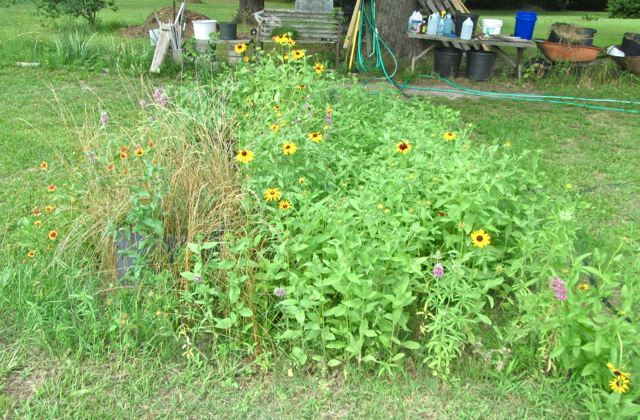 On May 29 the corn got really blown down during a storm.

It took a while to stand them all up and firm them in. A few days later on June 1 I pulled more soil to them and gave them their scheduled dose of ammonium nitrate.

After last night's storm I was really not wanting to go look at the corn this morning. We got lucky and fortunately not many were blown over. just some in the outside row facing the wind. But check out how they've grown in just 8 days after that shot of nitrogen! I guess they're big enough now that they're kind of holding each other up. They're about belly high right now. Hmmm, sounds like a song from "South Pacific"... 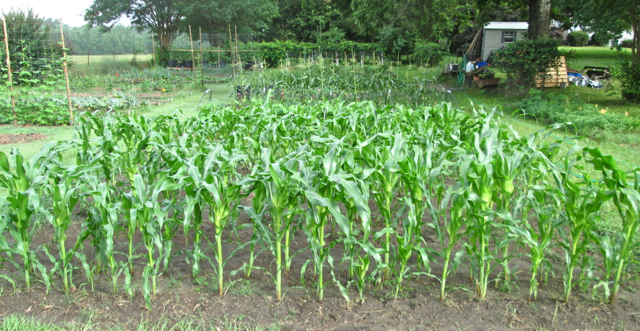 Keeping the fingers crossed as we're to have more pop-up t-storms this afternoon.
2

FINALLY! No rain this evening! I took advantage of that to spray all of the tomatoes and cukes with Serenade fungicide plus some Stop Rot added to the mix.

The first Japanese beetles of the season - I found three of them on Pickles' potted zinnias after noticing one leaf looking pretty lacy. Yep, there were three of them. One got away. Then I saw one crawling on a corn leaf. It didn't get away.

Tomorrow is destruction/clean up day in the garden. I need to dig up and get rid of the old kale and broccoli plants. Then I need to mow between the beds, especially around the cuke bed as the vines are plotting to escape it.

The first beans of the season were ready today. Two pounds of Contenders. 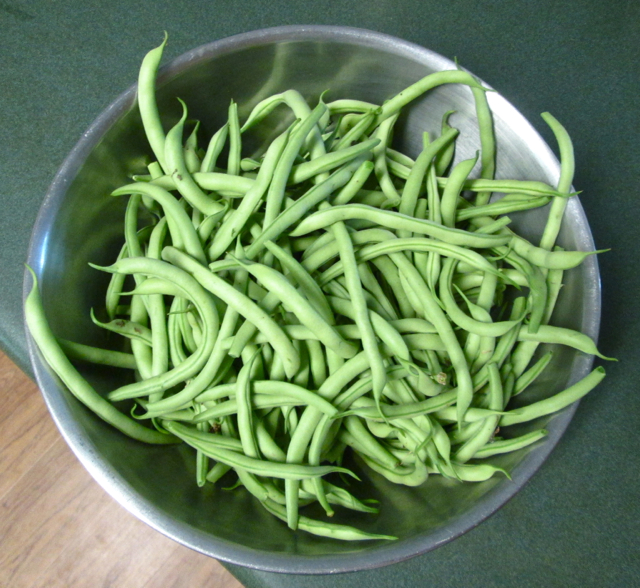 Thanks! So far they're doing good. Last year, for whatever reason, they didn't do so good. Go figure.

Yesterday's cleanup went as planned. Good riddance to spent plants! Mowed between the beds and then planted both sides of one of the empty beds with Colossus field pea. Pickles picked the first Feher Ozon peppers for inclusion into something she was making. Ah yes, three bean salad.

Out of 21 varieties, the tomato with the most progress so far is good old Early Girl. She always gets going early and sets a lot of fruit. This is her first set of clusters. The 2nd best, although with smaller fruit, might be Early Annie. This is the Early Girl: 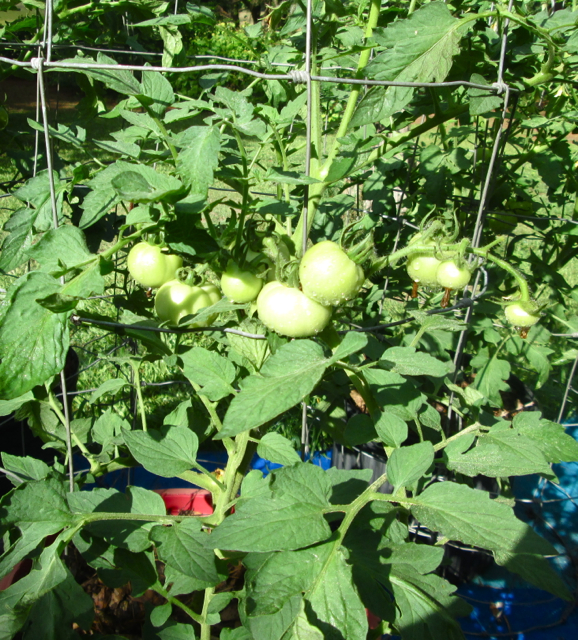 Once bean picking starts, it's an every other day thing. Two days ago I got the first 2 lbs of Contenders and today another pound and a quarter. Also today the first Golden Rod yellow beans were ready and I got a pound of those as well. The Blue Lake plants just keep getting bigger and are full of flowers. I might have to run a string down each side of them so they don't fall over. Those are skimpy Ky Wonders on the other side of the bed. They never did get with the program. 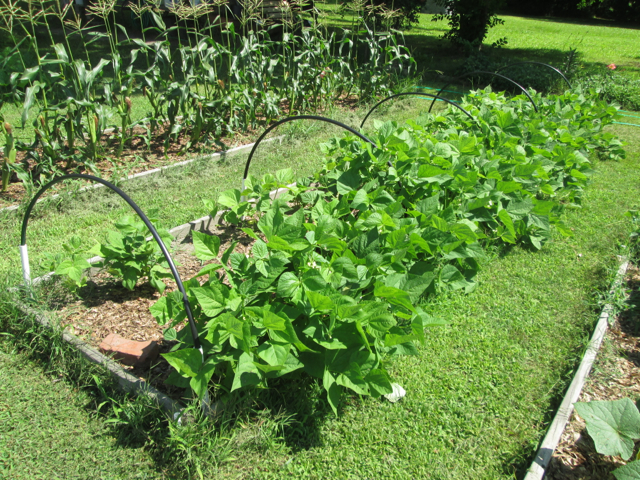 The cukes are going nuts, loaded with flowers and starting to put out. The first picking was just shy of 4 lbs. Pickles better get the pickle recipes ready! 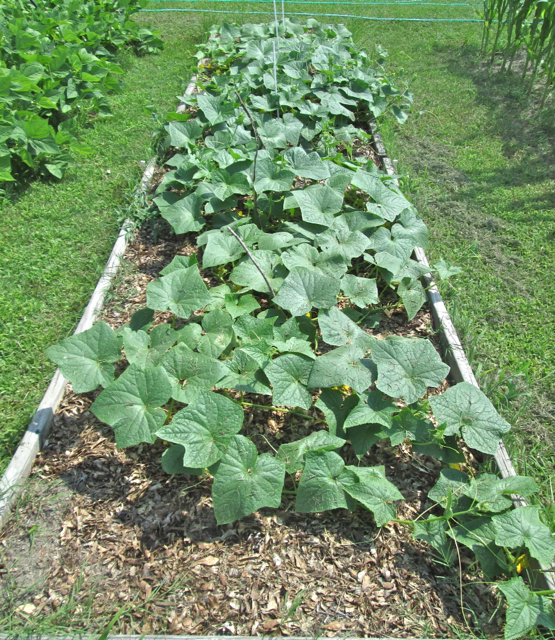 The kale has been loving the rain and really needed cutting today. After cutting off the stems I ended up with two Walmart bags both stuffed full of kale. Half of it will go into a recipe I'm making tomorrow, a super good Portuguese kale and chorizo thing that's almost as thick as a stew.

The first four jalapenos got picked this morning. I think I'm going to dig up the rest of the garlic this evening. The first blooms have appeared on the Charleston Grey watermelons and thankfully, for now, all's right in this little corner of the world.
2