Your garden is just exploding! Great time of year!
0
“Never try to outstubborn a cat.”
- Robert A. Heinlein
Top

The garden's somewhat on cruise control right now so it's time to start thinking about fall. Did I really say "fall"? Yeah, unfortunately I did. That starts with a seed box inventory, especially this year if there's still anything left to buy to fill in any fall seed gaps. So I did that this afternoon and it looks pretty OK, like maybe just some carrots and certainly "Amazing' cauliflower. Looks like I used up all of the cauliflower seed on fall '19 and this spring's experiments. And garlic. I need to order one new variety.

The next step will be to figure out what will be planted this fall and where it will go in the garden. But that requires one more thing to be done before that happens. I need to make a spring map and assign just general plant categories, like brassicas here, legumes there, etc taking rotation into consideration. That way I can avoid conflicts like planting something that runs long into spring in a bed where I should be planting something early like peas.

I hear heads shaking. "She's nuts! Just plant the danged stuff and be done with it." Point taken but that's what happens when you're a data and spreadsheet junkie. I also love jigsaw puzzles and that's just what this whole exercise is. I have a t-shirt that says, "I live in my own little world... but that's OK, they know me here." 'Nuff said.

Yesterday Pickles found the first hornworm of the season on the tomatoes by the house. She spied a little bit of caterpillar poop on a leaf and went to searching directly above it. Yep, a small one. Good catch! Time to get out the bT.

I've got another Small Wonder spaghetti squash growing under the lights and need to set it out in the garden soon. Hmmm, I can't put it where the first one was killed by nematodes. The only other open area where it will have room to run is the old asparagus patch where that zuchetta rampicante is planted. I'm sure they won't mind sharing the area.

Too funny, I do the same thing, I have spent plenty of sleepless nights brainstorming recipes, my best one so far has been my Luau Pork Shots. 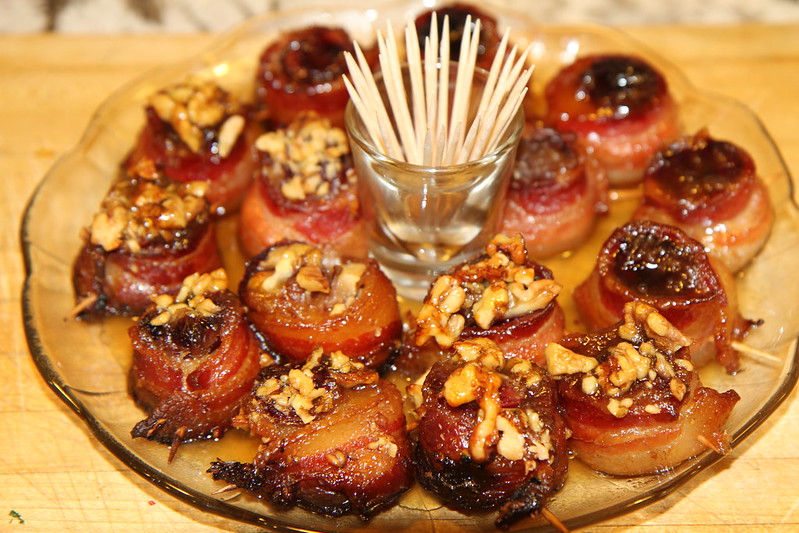 Today was pretty much the last of a rare and beautiful streak of temps in the 70’s with a delightful northeasterly breeze. Little by little, by the weekend we will be back in the 90’s and this past week will only be a very pleasant memory.

The garden has been loving it and things have been going nuts. Here are the tomatoes and other things up at the house as of June 1, just 14 days ago and how they looked this morning:: 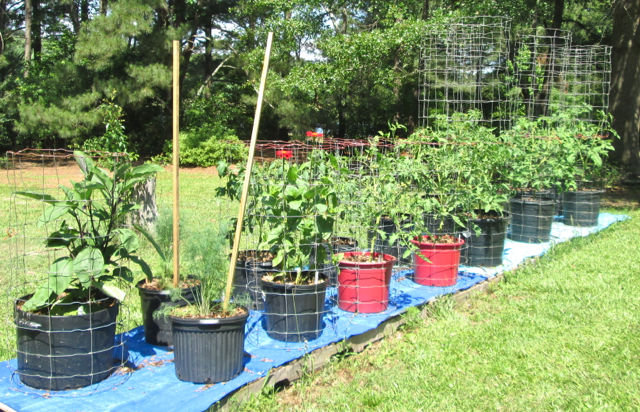 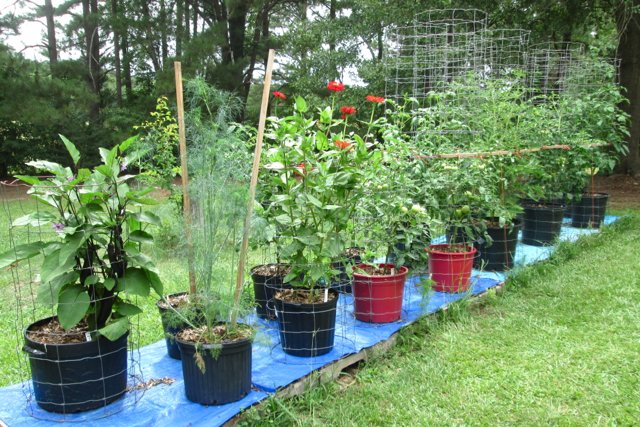 The Millionaire eggplant is really kicking in. There are several that will probably be picked and consumed this weekend. Time to get out the eggplant recipes for the upcoming avalanche! 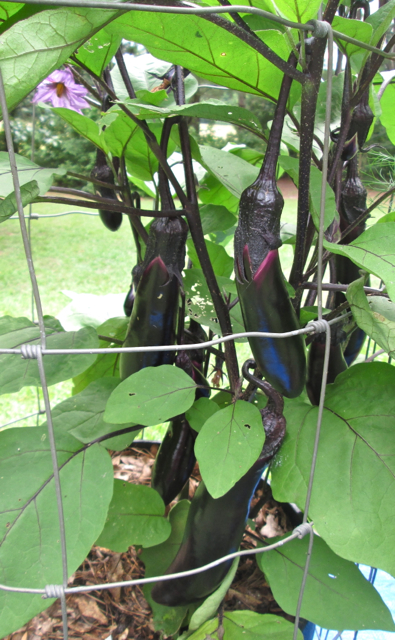 It’s squash bug patrol time again. I found some on the rambling trombone squash leaves today and got out the duct tape. It works well removing eggs from leaves if the eggs haven’t been on there too long. But the longer they’re there, the harder the “glue” gets and instead of blotting the leaf with the tape I need to try a hard wiping motion. If they’re really stuck on good then I just have to scrape them off with fingernail or pocketknife blade. Here’s what I got today and they were pretty easy to get: 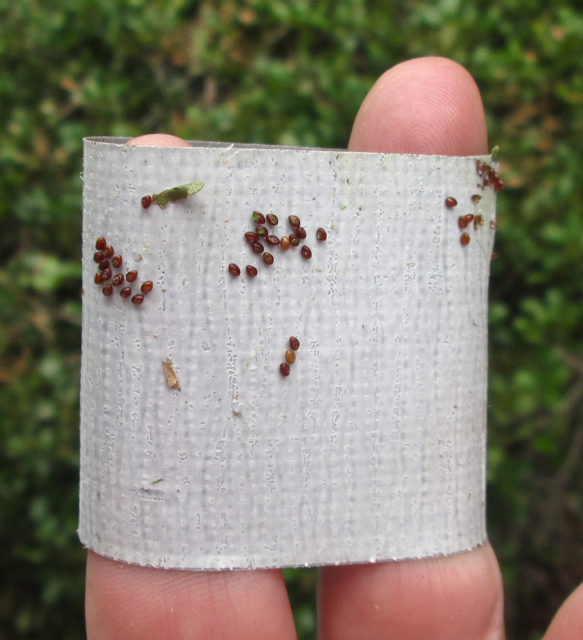 That certainly is some growth in two weeks!
0
Top

Here in N. Florida we just a couple of nice days after 3 weeks of humid hell, so maybe you’ll get another break there.
Your garden looks so good!
0
“Never try to outstubborn a cat.”
- Robert A. Heinlein
Top

That eggplant is huge and loaded with eggplants. Any special care or special potting mix?
Beautiful plant.
0
Top 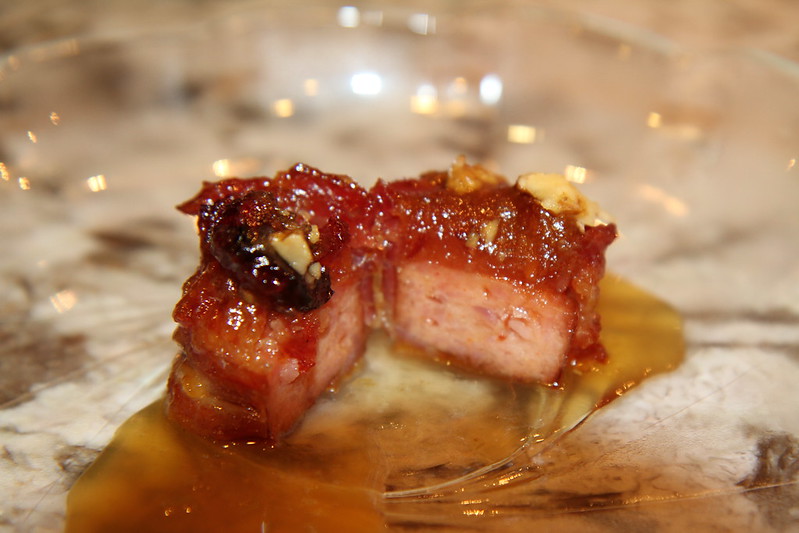 That eggplant is amazing, everything looks amazing but the eggplant is crazy.
Did you post anywhere in this thread how you fertilize? Whatever you doing is spot on!!
0
Top

friedgreen51 wrote: ↑
Thu Jun 18, 2020 7:08 am
That eggplant is huge and loaded with eggplants. Any special care or special potting mix?
Beautiful plant.

Thanks, FG and SQWIB. The mix I use is a nursery mix I get by the pickup load from a place called Bricko Farms. It's made up of their special compost called Compostost to which they add Kricket Krap (from their cricket fish bait operation), dolomite lime and composted pine bark. $40 for a cubic yard is a bargain! And the plant is in a 15 gallon nursery bucket so it has plenty of room for the roots. I guess they're happy!

Otherwise, it just gets regular watering and a weekly 1/2 gallon of Miracle Grow.

The tomatoes are planted in the same mix and get the same fertilizing.
0
Top

Maybe some rain this afternoon but just a 40% chance. I think I'll water so that it will.

The second half of June is pretty much the time that the garden peaks and it's getting there. Here are the two sides: 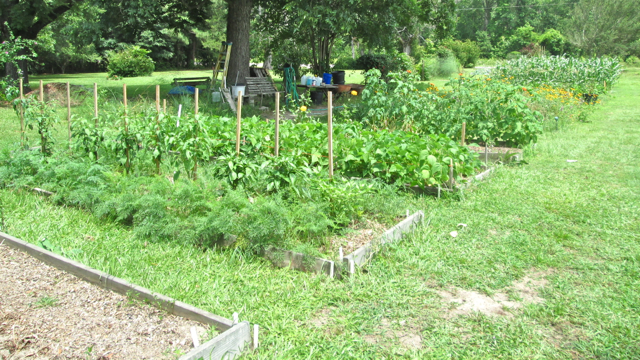 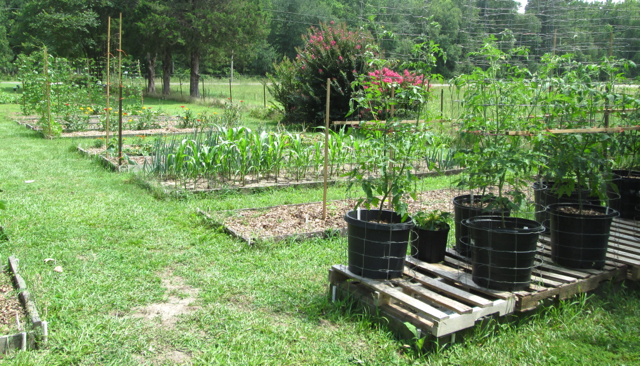 I grew another spaghetti squash plant to replace the one that the nematodes killed. It's been hardening off and today it got planted in the old abandoned asparagus bed where the trombone squash is growing. The two can share the space. But it's been hardening off in recent cooler weather and now it's getting hot again so I decided to shade it.

I took an old floor fan cover, attached a piece of recycled house coat with clothespins and sat that cover on top of four recycled tent pole pieces. 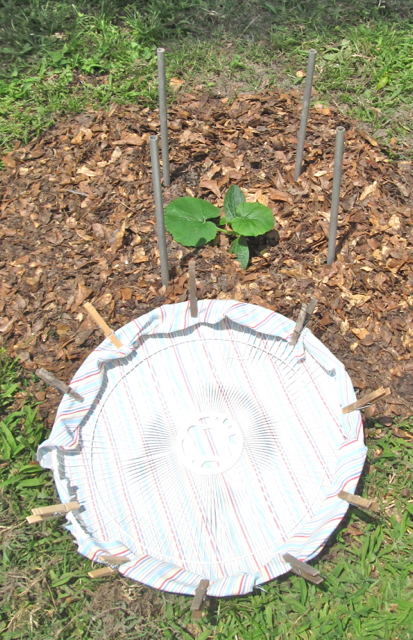 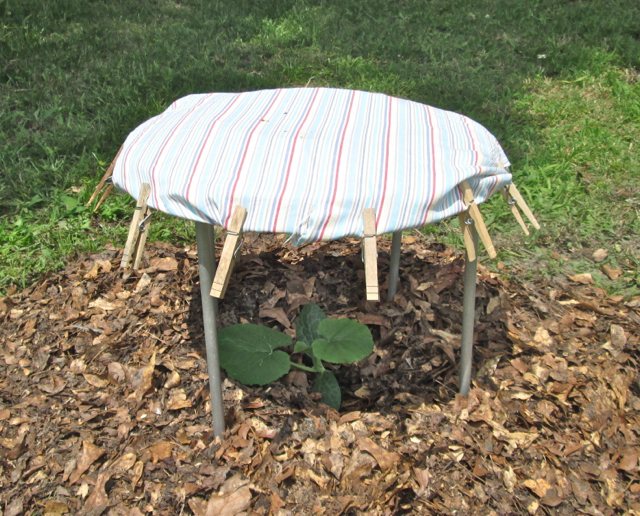 I'll leave it on a few days before removing it. Ya make it up as ya go along and use what ya have on hand!

Your garden looks fabulous and great idea for some shade too.
0
Top

Your garden is beautiful. Neat trick with the squash bugs.
0
"When we kill off the natural enemies of a pest we inherit their work."
Carl Huffaker
Top

Thank you for the kind comments. We all know our gardens are a labor of love. But now that it's in the maintenance phase, work turns to puttin' up. The fruits of the labor!

I think I might have to start a thread about recycling stuff for use in the garden...
0
Top

The Good and the Bad

The Silver Queen is coming right along and really to pollinate. This year has confirmed for me that the double row system works pretty well. Not only can I grow more in the same area, but the furrow formed in the middle of each double row holds water well if I have to water by hand. The only drawback is that I can't pull soil to both sides of the stalks. 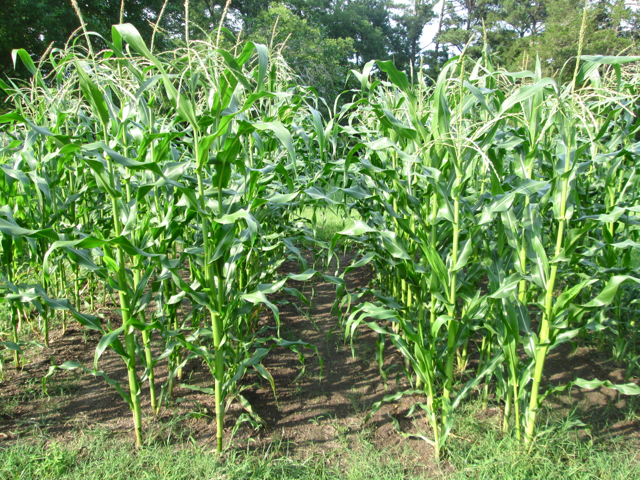 Of course, you know that when the corn gets to this stage there *has* to be a storm with wind. I think it's in the gardening rules somewhere in the "Things That Can Go Wrong" chapter. Late yesterday afternoon a storm came along, dumped 1" on us (a good thing) and blew down the first double row of corn. I couldn't stand them up and firm them in this morning because it was still windy enough that they wouldn't stay upright. And since we're supposed to have a reoccurrence this afternoon I decided to let them lay there until tomorrow morning. 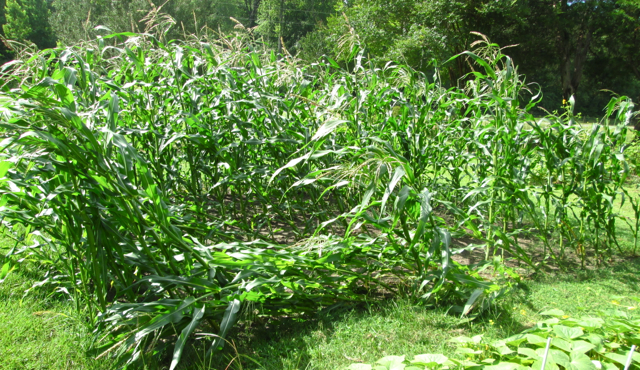 On a brighter note, the Colossus field peas are up with amazing germination. 100 of 101 seeds came up! Now that they've been rained on I need to mulch them. Those are purple coneflowers in the bed next to them. 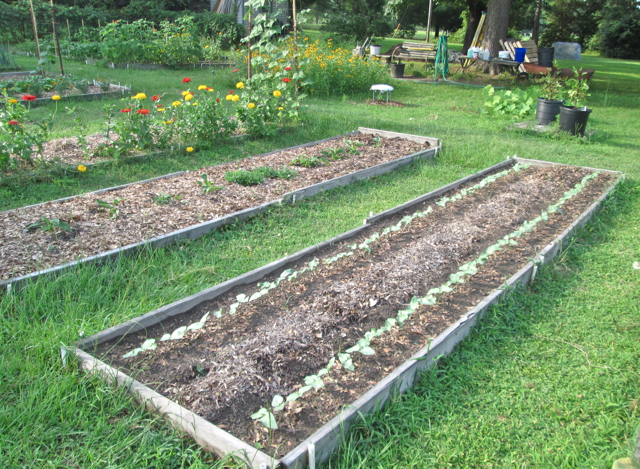 The kale and collards, five okra plants (the sixth one died) and the Roma beans are coming along. I picked the first Romas this morning. Four pounds total this morning among the Contenders, Golden Rods, Blue Lakes (another first picking) and the Romas. When added to more beans in the reefer, it's time to can up some more. 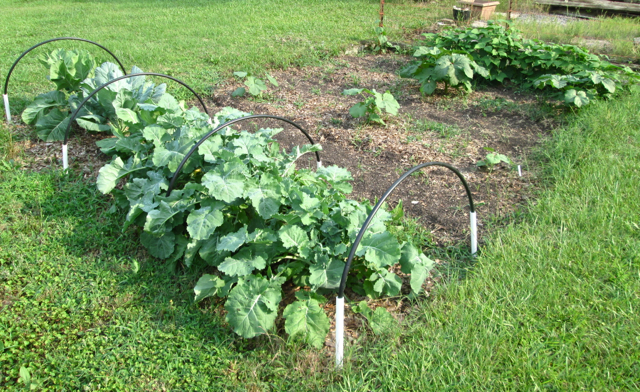 Just a half hour ago we got rolled over by another t-storm. I don't think there was a lot of wind with this one, just a lot of lightning and rain. At least I'm hoping no more corn went down.
2

Another Day In The Dawg Patch

I spent about three hours out in the garden this afternoon as it was fertilizing day along with other tasks. All the tomatoes, peppers, cucurbits and flowers got a drink of the blue stuff and each of the two watermelon plants got a tablespoon of ammonium nitrate.

Then I got the popcorn bed mulched. It's really shot up after it's ammonium nitrate dose ten days ago. I've decided that I will keep planting scallions along the edges of the corn beds. They fit well space-wise and don't mind any excess fertilizer that might leach their way. 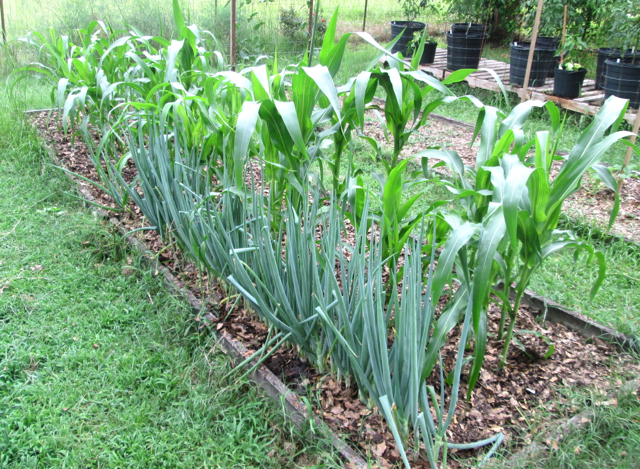 Like the scallions and onions, the peppers and spring planted carrots fit well together. The carrots are spilling over both sides of the bed so it's about time to pull a bunch and can them. I picked more of the first jalapenos and now have enough to maybe put up five half pints of pickled slices tomorrow. 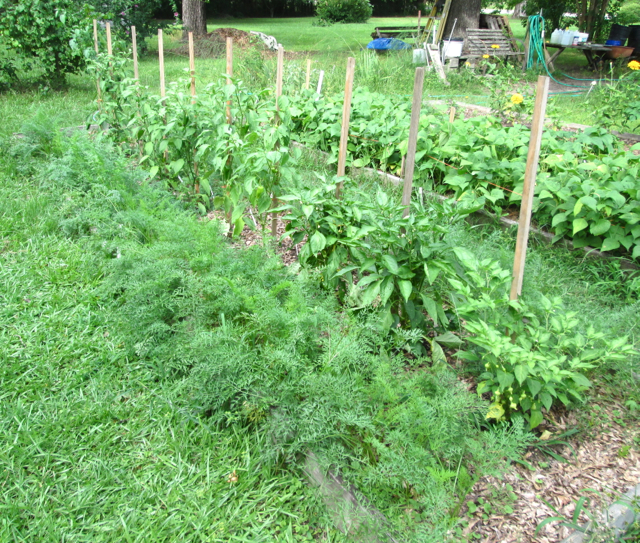 The cucumbers aren't doing so well. For a week now the color of the plants has been lightening up and I'm thinking nematodes at work. If they start looking thirsty that will be a sure sign. After several days of afternoon showers I'm also starting to see some funk. That's summer showers for you. If you spray to keep funk at bay it's washed off later in the day. Fortunately Pickles, true to her nickname, has been just pickling away and might have everything done that she wanted to do. Besides, the cukes planted among the sunflowers are still looking OK and making. 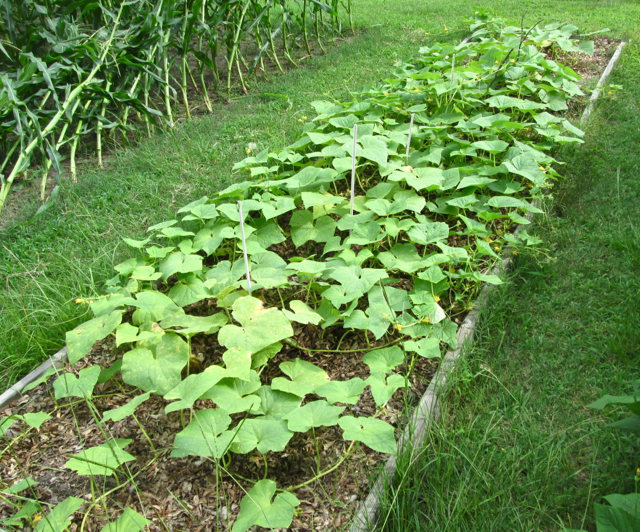 But I'm hedging my cuke bet by trying one on a trellis and it's now flowering. There's a little summer squash planted next to it and they were supposed to share the trellis but Mr. Cuke wants to hog the whole thing. I've been trying to keep guiding it to it's half of the trellis. The squash is behind schedule and small because I had to replant it. 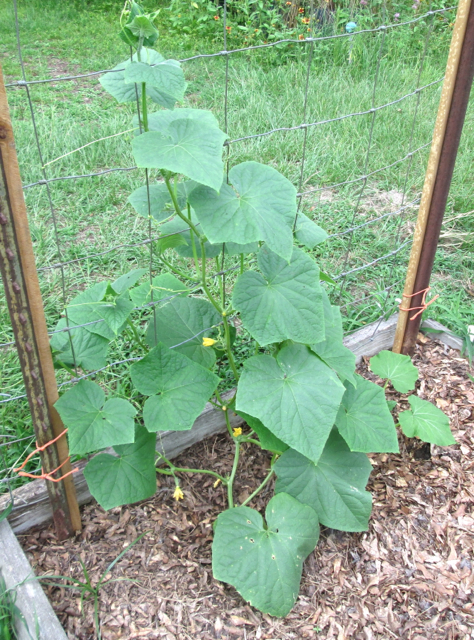 We had another t-storm last evening that dumped another inch and it came from the opposite direction that they usually come from. And of course a little bit of that corn that I stood up the other day fell in the *other* direction! Well, it can stay there and pollinate itself on the ground. I'm tired of fooling with it. 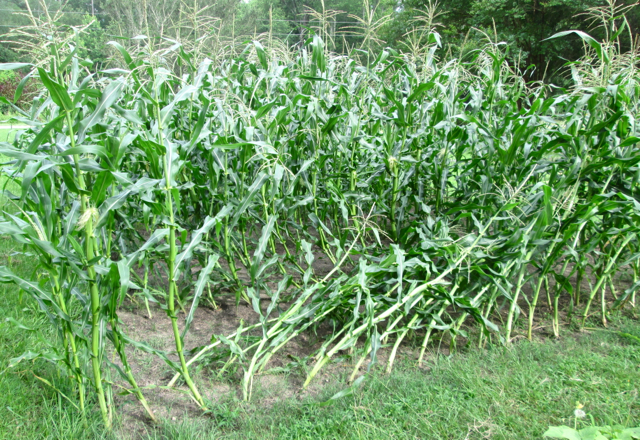 And finally, the mystery Tithonia has bloomed and phooey...it's the same orange as the others, not yellow. And it's also starting to stretch and open up into a habit like the other ones, not so dense. It is taller than the rest but every family has one of those. At least it was something exciting to watch even just for a little bit. 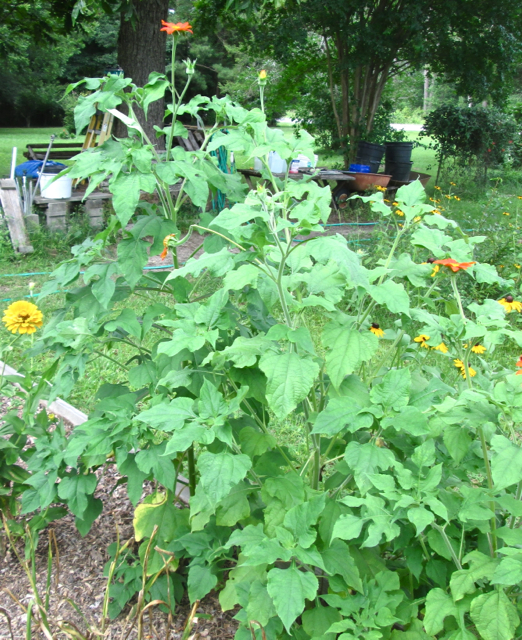