Excellent! Glad you had a productive day in the garden. The sage is doing really well for having overwintered in place.

And still one of my favorite songs ever. They just don’t make ‘em like that anymore.
0
“Never try to outstubborn a cat.”
- Robert A. Heinlein
Top

I'm so glad to hear that you are feeling better and got to give the Mantis it's maiden run. It sounds like a worth while tool that you will enjoy using. Your gardens are looking good!
0
Enjoy the Day!
~ Patti ~
Top

Here's the 'Major Wheeler' honeysuckle that's on a trellis next to the garden: 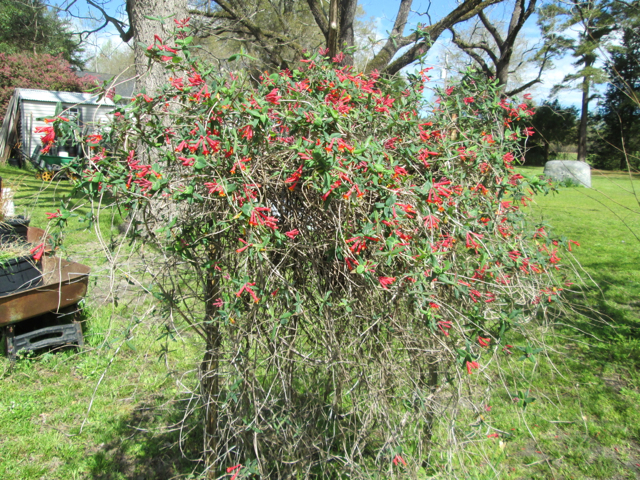 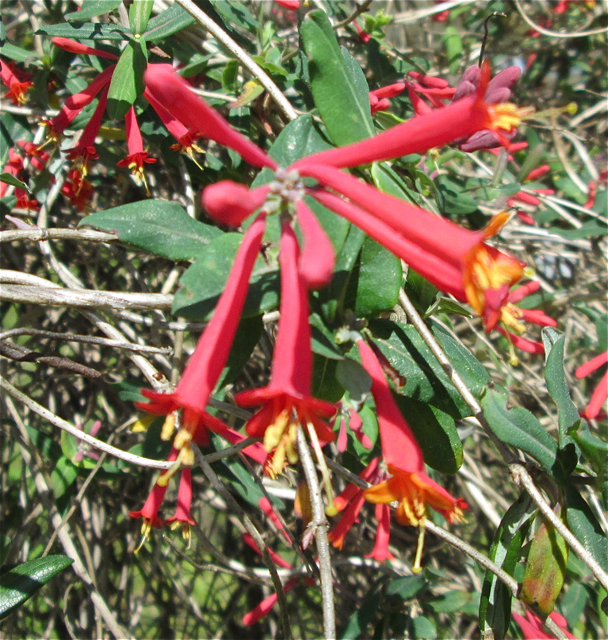 That is beautiful. What do you have it growing on? How tall is it? Do you have any hummingbirds using it yet?
0
Enjoy the Day!
~ Patti ~
Top

Thank you! It's on a trellis I made by pounding two metal t-posts into the ground and tied a piece of field fence to it. Easy peasy with amterials already on hand.

Funny you should ask about hummers. We say the first one just this morning! They're about a week late.
0
Top

It's getting busy around here. Spring has busted out for sure. The Yellow Menace (pine pollen) is everywhere, coating cars, grass and slow dogs. The local wisteria and azaleas are blooming. The woods line across the pasture has taken on that faint spring green tinge of baby leaves pushing out while the pecans and oaks are pollinating, ready to drop dingle dangles everywhere and carpet the place with them.

I've been working on digging out a bed for the Jerusalem artichokes, a place where they'll be contained. There's a gravel filled area where a single wide trailer used to be decades ago. Some of the area has already been reclaimed for gardening but I've been prepping another 3' wide strip just for the artichokes. I have started filling the bed with used potting soil from last year's big tomato buckets and will finish that today so I can plant. It will probably need more soil than I have. The tree will be cut down. It's a fire blight magnet. 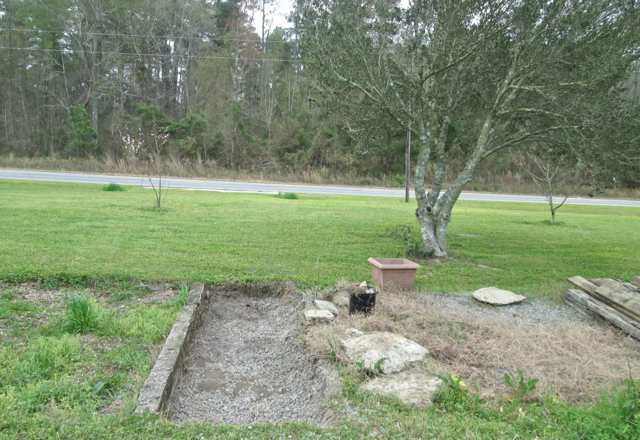 I've got three each of collards and kale planted down on the end with deer netting over them. The rest of the weedy area will be tilled for two okra beds and pole beans on a trellis. Various squashes grew there last year.

The gravel that was dug out was relocated to build up low areas in the driveway where water settles after a rain. Lots of little trips to keep each load light enough for me to be able to manually dump the cart. 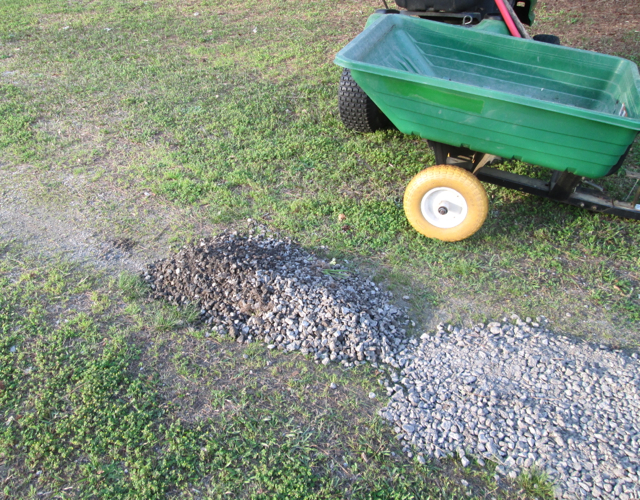 Pickles dug out the Knockout roses and is going to make two new beds, one for flowers and one for blueberries. The new Mantis tiller should make short work of removing the grass and fluffing up the soil.

In other areas of the garden, the second bed of peas and another half row of turnips have been sown but aren’t up yet. However the carrots are starting to pop up. And the third set of three broccoli plants are in, leaving one more set to plant in about ten days.
1

Nice progress! Have you picked out the blueberries yet?
0
“Never try to outstubborn a cat.”
- Robert A. Heinlein
Top

I have just two for now to see how they do before spending more money on them. They are 'Blue Suede', an early, self-pollinating rabbit eye variety that was developed and released by the U of GA. They're blooming like crazy in their buckets so I need to get them into the ground soon.
1

Yesterday I noticed that the recently planted peas in pea bed #2 are popping up. This is the latest I've ever planted peas but that bed was way too wet to plant when the other one was. Wando peas are supposed to be heat tolerant and now it will be near the end of May before they get ready for picking. We will see. At least the two beds will be ready at different times.

The oaks are starting to pollinate and are also pushing little leaves. Shade is increasing every day and soon the ground will be covered with a thick mat of what i call dingle dangles. 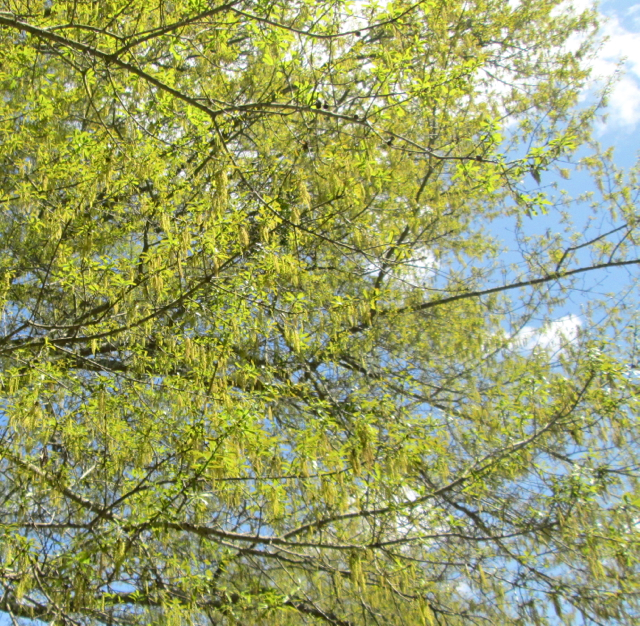 The Indian Hawthorne 'Georgia Petite' are starting to bloom and are putting a slight sweet scent into the air. 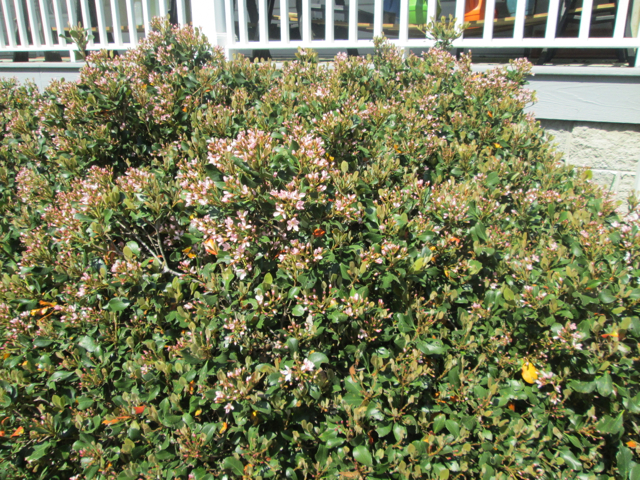 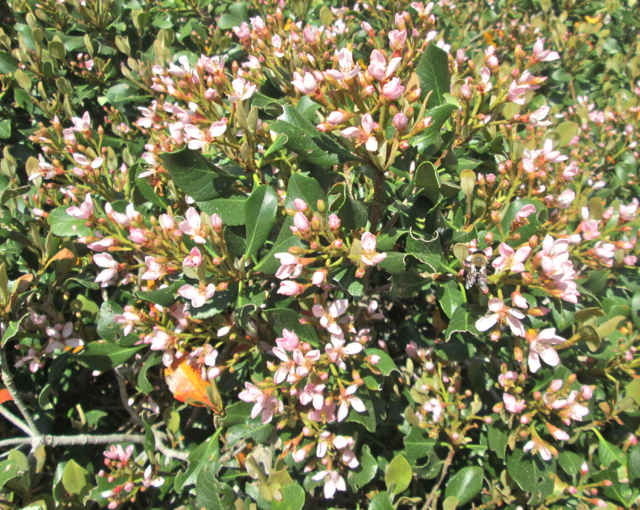 We've had several days of temps in the upper 80's. I can just hear the nematodes waking up. But Tuesday should bring rain and more seasonal cooler temps. I think I will throttle the urge to plant summer squash seed.

Plants are starting to accumulate on the front porch with some coming and some going. It's the regular annual procession of stuff hardening off and eventually comes down to all-summer residents after everything else has been planted.

This is a mix of some broccoli, thyme, peppers, a dwarf tomato and a new darker-red roselle called 'St. Kitts and Nevis'. 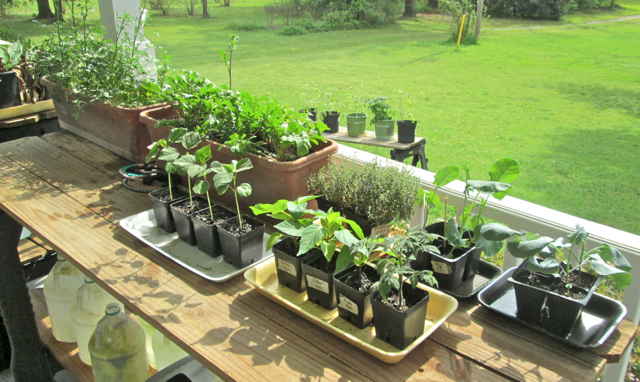 The parsley is bolting as is the arugula. I should have started another 6-pack of parsley sooner but dilly dallied until two days ago. But I will leave the bolting ones to go to seed for collection and the plants for munching when the butterfly larva appear. 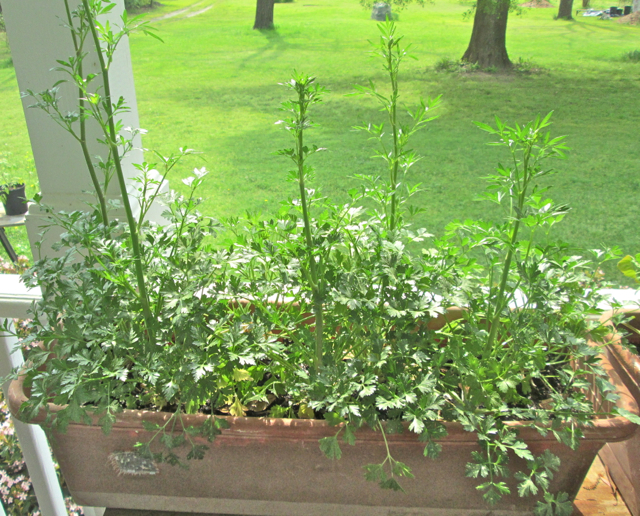 The dwarf cherry tomatoes have been something to play with before the regular tomatoes get going. The second one from the left is a very stocky 'Red Robin' that has one cherry tomato on it. The others are 'Whippersnapper' and supposedly will fall over and trail down. They're loaded with flowers. 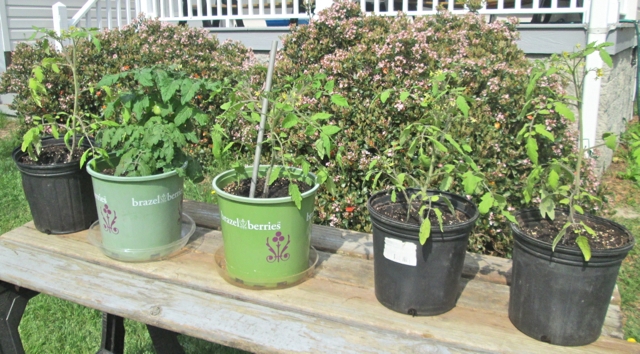 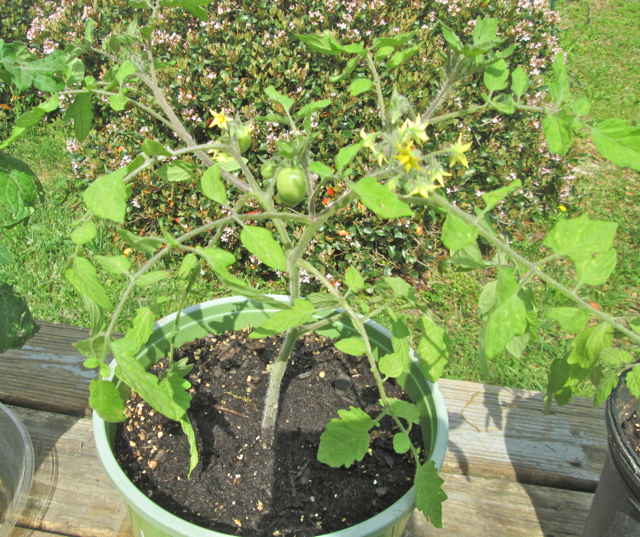 The peppers are up and under the lights. I got them started early because they're slow. Tomatoes will be seeded on Tuesday.
1

I am so envious of your plants. I can almost feel the warmth.
0
Top

We've been on a four day stretch of highs around 87. Whew! I had to break out the shorts and sleeveless T's for working in the garden! A front's coming through with rain Tuesday and that will bring highs back down to a more normal 68-70. I'm afraid those danged nematodes are starting to wake up. Soil at 65 degrees is their wake-up call.

I hear you. Same front is hitting us Tuesday night as well. I’ll be so happy with cooler temps Wednesday.
0
“Never try to outstubborn a cat.”
- Robert A. Heinlein
Top

I usually wait to start flowers and herbs until the tomatoes and peppers leave the light stand and go out to the porch to harden off. It's a space issue. Well, I jumped the gun and got the flowers and a few herbs started and they filled the bottom shelf. It's going to be fun making sure everybody gets enough light once they all pop up. 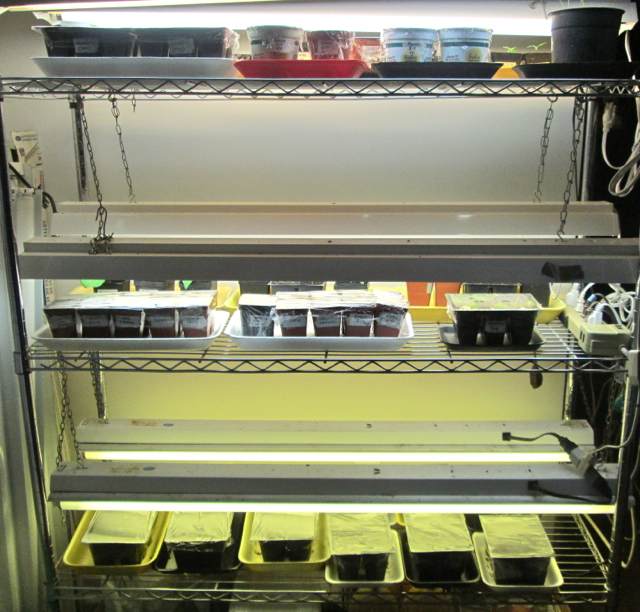 Meanwhile, out in the garden all of the potatoes are now up. The Kennebec (front of the row) popped up on 3/24 while the Yukon Golds (back half of the row) took about three days longer. It seemed longer than that but my notes say otherwise. There are 9' of each. 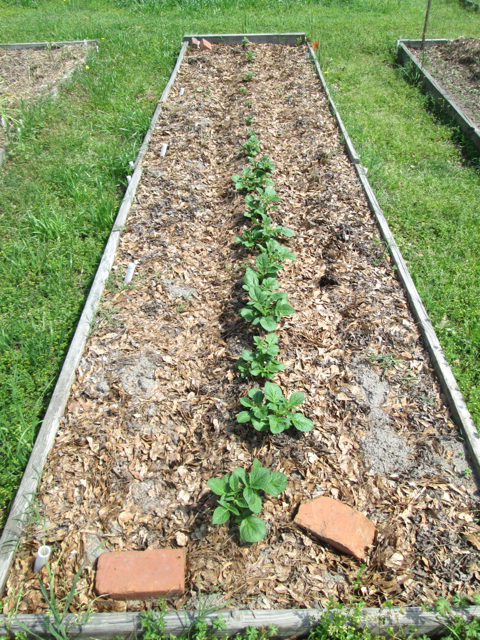 Half of the garlic is junk. The bad ones are those from last year's stock. That wasn't a particularly good crop as they were small and in the ground too long. The ones on the other side of the bed (Siberian and Russian Inferno) were bought in the fall and are doing really well. 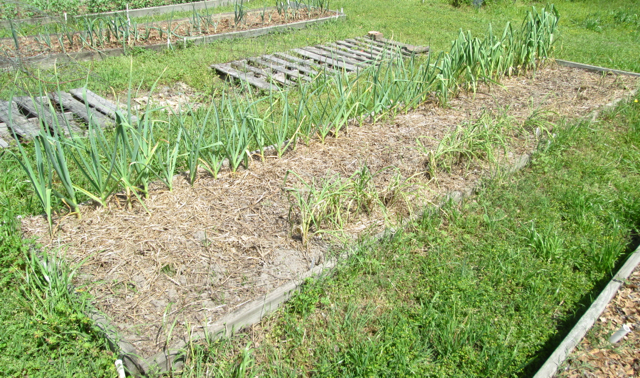 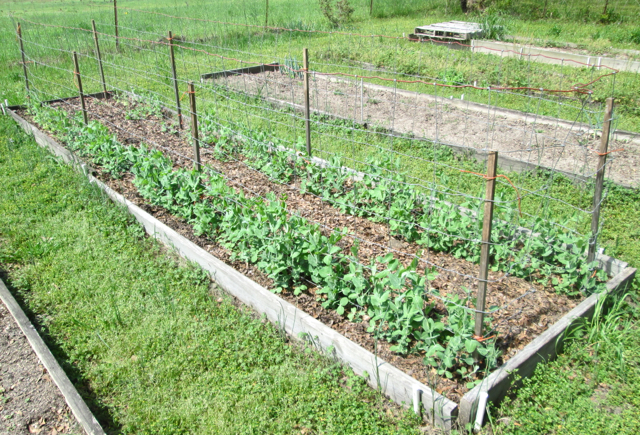 Due to that recent streak of hot weather the fall collards started bolting a few days ago. 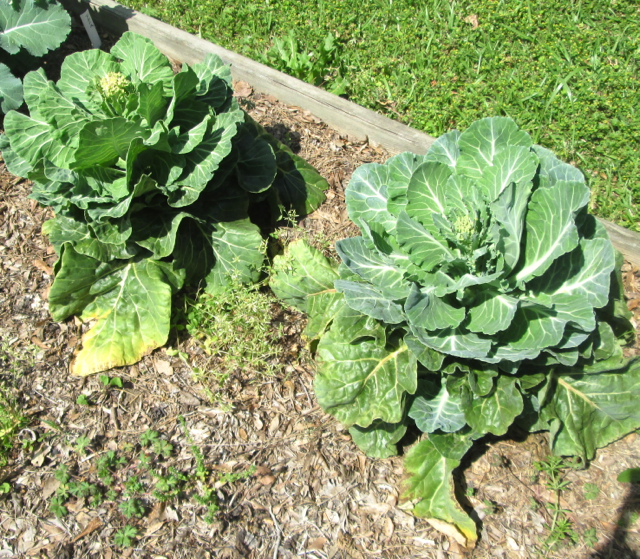 Today I noticed that the fall kale is starting to bolt too but fortunately the new collards and kale are almost ready for their first picking.

This afternoon Pickles and I made two trips to my secret source to get 8 pallets for the tomato buckets to sit on and a load of 1"x1"x8' stakes for various garden uses. Normally that company burns them on Fridays so I got my pick today. You can't beat free!
0
Top

Free is fantastic, especially for something like pallets!
Your potatoes are looking good. Harvest starts in May for those?
I’m going to miss peas. My last batch in part shade will only last another couple of weeks whereas you’ve got lots of pea season left. Lucky!
0
“Never try to outstubborn a cat.”
- Robert A. Heinlein
Top

Ooooh, please explain! Here we only plant in early spring, I thought. Are you talking about pulling little ones for later planting?
0
Top

Good grief! Late yesterday afternoon the Georgia Governor issued a shelter in place order starting at midnight tonight and closed all the schools for the rest of the year. Nothing like all that advanced notice.

The day after I start all the tomato seeds. My guess is this is all because of the mess in Atlanta. There's not much virus around here.

I need to call the place where we buy the potting mix in bulk and see if they're open over there in South Carolina. They're right on the border, just outside of Augusta and they don't fit into SC's "non-essential" list. If they're open we need to get two pick-up loads today to get it now instead of three weeks from now when we'd usually get it. Get while the gettin's good.

How to store all of that? Depending on the call to Bricko Farms I will spend part of the morning washing and sanitizing 21 (10 and 15 gal) tomato planting buckets so we can shovel the mix right off the truck into the buckets. Then we'll put the buckets on those pallets to keep the ants out of them and put a tarp over the buckets. Thank goodness we got those pallets yesterday. Any excess mix will be wrapped up in a giant tarp like a huge package to protect for later use.

If they're closed for the duration, well, I have no idea what I'm going to do with all those tomato plants that have been started. They can't be planted directly in the garden due to nematodes and a bacterial wilt problem that affects only the tomatoes. Maybe plant them all around the property in native soil. We'll cross that bridge if and when we have to. As my old drill sergeant used to say, "Good training!"
1