I've tried several times, but have never been able to get viable eggplant seeds. How do you do it? Are seeds from hybrids generally viable?
0
Top

My best advice is to watch YouTube videos. They show you not only how, but how to tell when ready.
0
- Marsha
Top

I tag one eggplant and leave it on the vine till it starts to rot, then scrape out the seeds. 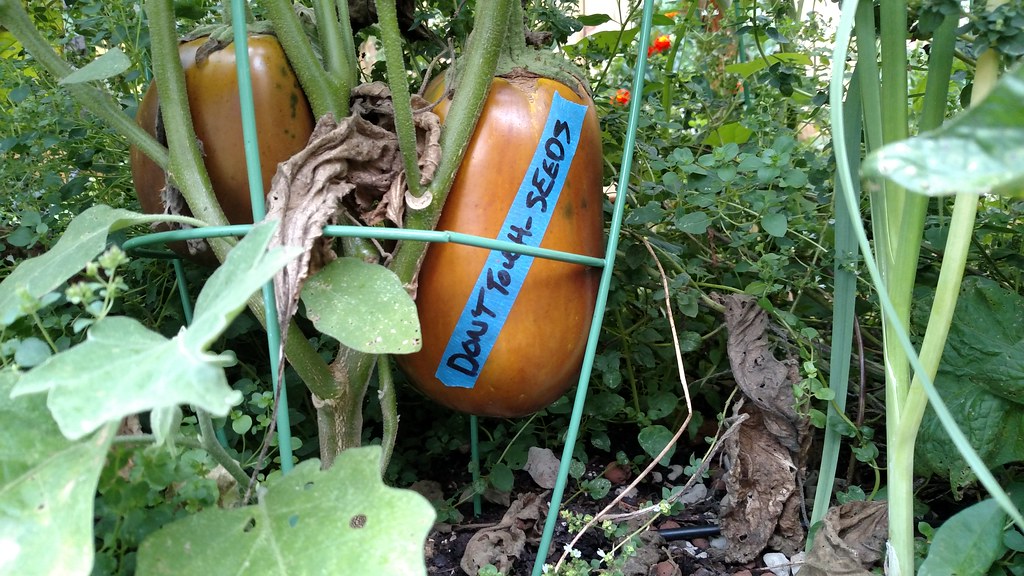 Thanks to both of you! It seems most likely that I've been trying to harvest the seeds too soon. I'll give it another try this summer.
0
Top

Yes, most likely they weren't mature. They're pretty big when they're good for saving.
0
Top

Yep, let the eggplant rot. Just throw in on the ground and forget about it till it starts to fall apart.
0
Zone: 9A
Climate: Hot and Humid
Avg annual rainfall: 60.48"
Top

These guys gre eggplants for seeds for Baker Creek. Thought you might enjoy this.

Very interesting video. I do wonder about using mechanical separation that could damage the seeds? Certainly a germination test would tell if there was an issue. Anyway, for my purposes, 50-100 seeds would be the greatest of plenty, so I wouldn't have to use any grater, food processor, etc.
0
Top

Some of the other videos show just spooning out the seed area and mushing it with your hands into a bowl of water. I tried it, it's like tomato seeds, the pulp floats the seeds sink to the bottom. Pretty easy and no grater or food processor to clean. You just rinse the pulp out, and let the seeds dry.
1

It's been a long time ago, but did as many do on here to save the seeds, making sure to mark some of the "female" eggplants as they get seeder than the male ones. I used to let them get disgustingly soft and hey smelled bad, did it outside.
0
Together, trees make an ecosystem that tempers the extremes of heat & cold, stores lots of water, & makes a lot of humidity. In this environment, trees can live to be very old. To get to this point, the community must remain intact no matter what.
Top

imp wrote: ↑
Sat Feb 15, 2020 11:25 pm
It's been a long time ago, but did as many do on here to save the seeds, making sure to mark some of the "female" eggplants as they get seeder than the male ones. I used to let them get disgustingly soft and hey smelled bad, did it outside.

As with tomatoes and peppers, there are no female eggplants. Not sure where that myth started.

I usually don't save EP seeds, but I do what SQUIB does - I let them ripen to a yellow color, then just scrape them out of the EP. I don't need to get every seed, like they do when selling them! However, they never really rot, though I usually do this later in the season, as leaving one to get yellow slows the plant down, considerably, when I do it. When I save the seeds, I do bag the blossoms, as I always have other varieties around, and they can easily cross.

Last season I saved some Neon seeds, despite being a hybrid, because the variety was dropped from all of the catalogs it was in, as well as ebay. I'll see what happens. It is one of my three favorite varieties that I would grow every season - Hari, Ichiban, and Neon. Ichiban, another hybrid, has always been the first variety to produce for me, despite always trying new varieties! Only drawback is that, like almost all other varieties I have grown, it stops flowering in very hot weather, like most tomatoes. Hari, a green Indian variety, is the best producer, and keeps producing through the hottest of weather, and is the second earliest, despite many other green varieties I've grown being some of the latest. Hari is supposedly a hybrid (when I get a tsp of seeds in a packet, my guess is they are not hybrids!), but somebody I gave seeds to saved them from the plants that year, and they seemed the same. Neon is almost as large a producer, and almost as heat resistant as Hari.

They did this about 10 -15 years ago - dropped Neon, and sold something as a "replacement" for the Neon, with even the same photos in the catalogs! But they were nothing like them, unfortunately. about 5 years later they showed up again on ebay. Same thing happened way before that with Ichiban, which also came back, to stay. Hopefully, same thing will happen this time.
0
Woodbury, NJ zone 6B-7
Top

The male/female thing is why I first used quotes. I try to save seed from the fruits that had a longer blossom end scar as they seemed ( no science just seemed that way to me) to be "seeder" than the ones with either a short scar or a dot scar
0
Together, trees make an ecosystem that tempers the extremes of heat & cold, stores lots of water, & makes a lot of humidity. In this environment, trees can live to be very old. To get to this point, the community must remain intact no matter what.
Top

One thing that I found while looking at OP eggplants is that Neon (one of my favorite varieties) is in fact OP. I originally bought my seeds from "Cooks Gardens" (part of Burpee, I think), and I thought it was a hybrid. I had terrible luck with germination, but then I read that Neon had poor germination. Then I switched to Dancer from Johnny's and my results were much improved. Anyway, Neon grew and produced well in an EB, once I got the seeds to germinate and had thriving plants.
0
Top

@Greatgardens That was where I originally got Neon, in the the late 80s or early 90s, and I think it was when Burpee had bought them out, and eventually closed them up, was the first time it went off the market. After they came back - first on ebay, and eventually in other catalogs - they were listed as hybrids, but maybe to keep us from saving seeds - I think this happens a lot! If these seeds I saved breed true, this will prove it is OP, and I'll save them, from then on.

Neon has been notorious for slow germination. I thought that this may have been a result of the cross. I'll definitely treat them with GA-3, since this helped, and I'll start them a little early.
0
Woodbury, NJ zone 6B-7
Top

What is Ga-3? Never heard of it, and searches turn up stuff from Georgia.

That's it - gibberelic acid. The 3 is there because there are other variations on it, but the GA-3 is the one produced for treating seeds, as well as a foliar spray, though I don't use it for that. Here's a thread I started, showing my experience in treating eggplant seeds, as well as others.
viewtopic.php?f=7&t=534
1

Are you going to grow and save seeds from Neon again? If you do, I'd like to get some seed from you. I checked my seeds, and my Dancer (replacement) seed is from 2013. How time flies by!
0
Top

@Greatgardens
If the seeds grow some true Neon, I'll definitely save some more seeds. If I get different eggplants, indicating that it was a hybrid, I'll see if any seems more like Neon, and which seems best, overall, and save those seeds.
1

Users browsing this forum: No registered users and 3 guests