I had breakfast for supper and it didn't disappoint!! Just some cheap chuckeye steaks on the grill, store bought hash browns and grits covered in eggs. This is one of life's greatest meals, especially at 3AM from Waffle house after a night out.

And you know the grits, hash and eggs has to be mixed!

I need to look up making hashbrown at home.

Last night I made something with part of a butternut squash from 2018! That variety - Polaris - stores better than any others I have grown, and produce well, too. I check the squash every couple of weeks, to see if there are any bad spots, and I had to use one. I made a soup, based on Thai curry, because I had to trim a very long branch from one of my kaffir lime trees. The soup had some red lentils and some jasmine rice to give it thickness, and it was even better today than last night. Today, I had to make some more Thai curry paste, since I used the end of it, and I can't be without it! And this time I tried a new (to me) pepper in it, the Indian Byadagi pepper. When I first found these, I loved the aroma, and knew that it would make a good Thai curry. I haven't used the new paste yet, but it is very good, and I'll be making another Thai curry soon. 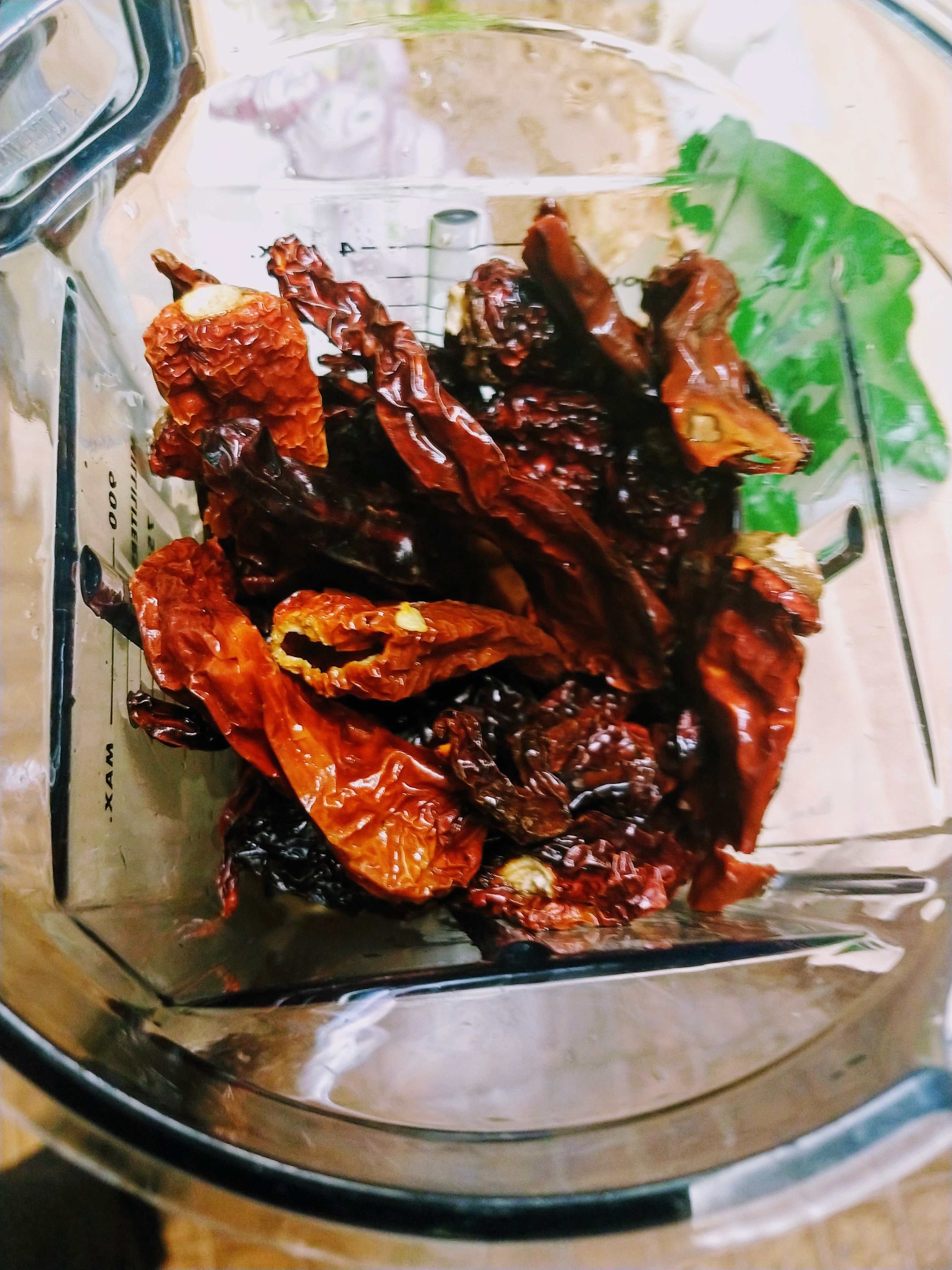 Byadagi peppers, soaked, and ready for curry paste. by pepperhead212, on Flickr 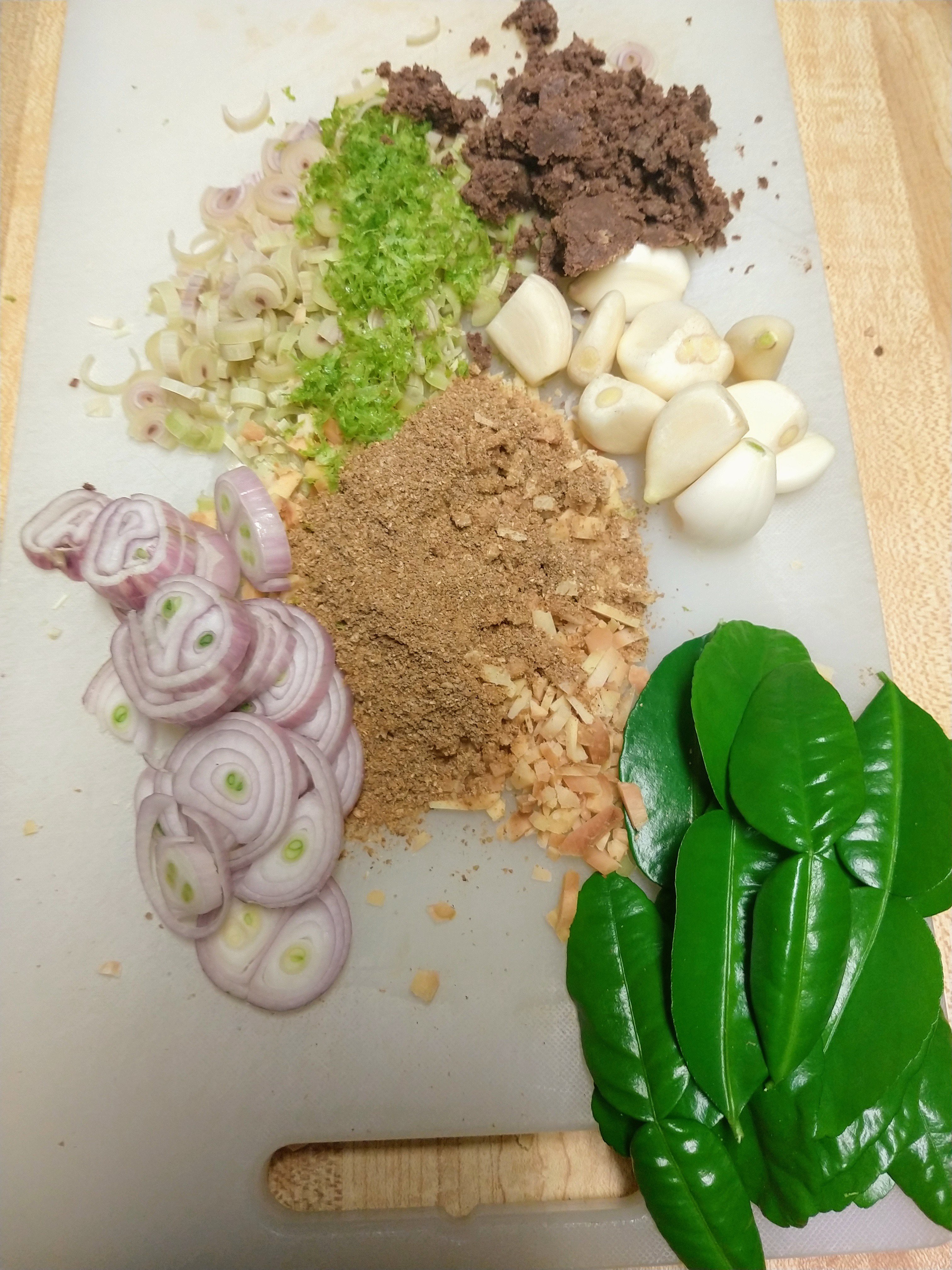 Ingredients for Thai curry paste, minus the chiles. . by pepperhead212, on Flickr 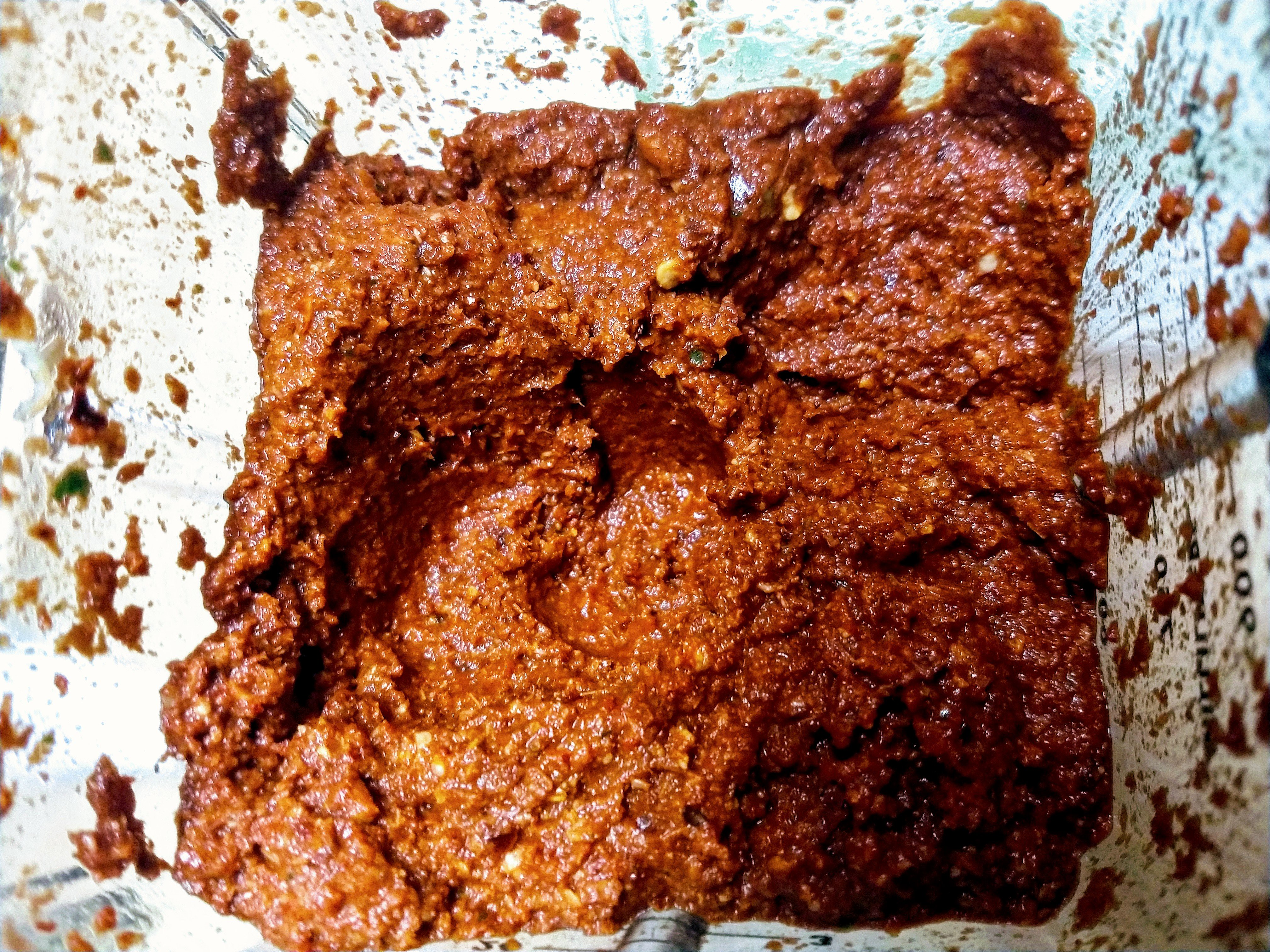 I've been busy most of the day working on the site but had to eat so I made an improvised pork shank curry served over ramen. I made up the recipe as I went along. This is just spicy enough to make it hot but it makes you want to keep eating. I used skin on pork shanks and you can see all that gelatinous goodness with the thick curry gravy that sticks to the noodles.

Pork skin and the trotters make such good gravies and are tasty, too. Nice thicker noodles, too!
1

Today I made another IP dish - Mushroom Beef Barley soup. The soup was started in the IP, in sauté mode, cooking a mirepoix in some ghee, then added some chopped up rosemary and sage, some chopped celery leaves, some soaked and minced boletus mushrooms plus the soaking water, 2 qts of water, and 1 c barley. I salted it with some soy sauce, then covered, and pressure cooked for 20 min. While cooking, I washed, sliced, and cooked 10 oz cremini in a wok, adding a lb of ground beef and browning this well. I added this to the soup, when that was done, deglazing the wok with some of the soup, then added 1/2 c red lentils to the soup, to thicken it, and pressure cooked 8 min., letting the pressure release naturally. This finished the cooking of the barley, and thickened it just right. I served it with a little grated reggiano. 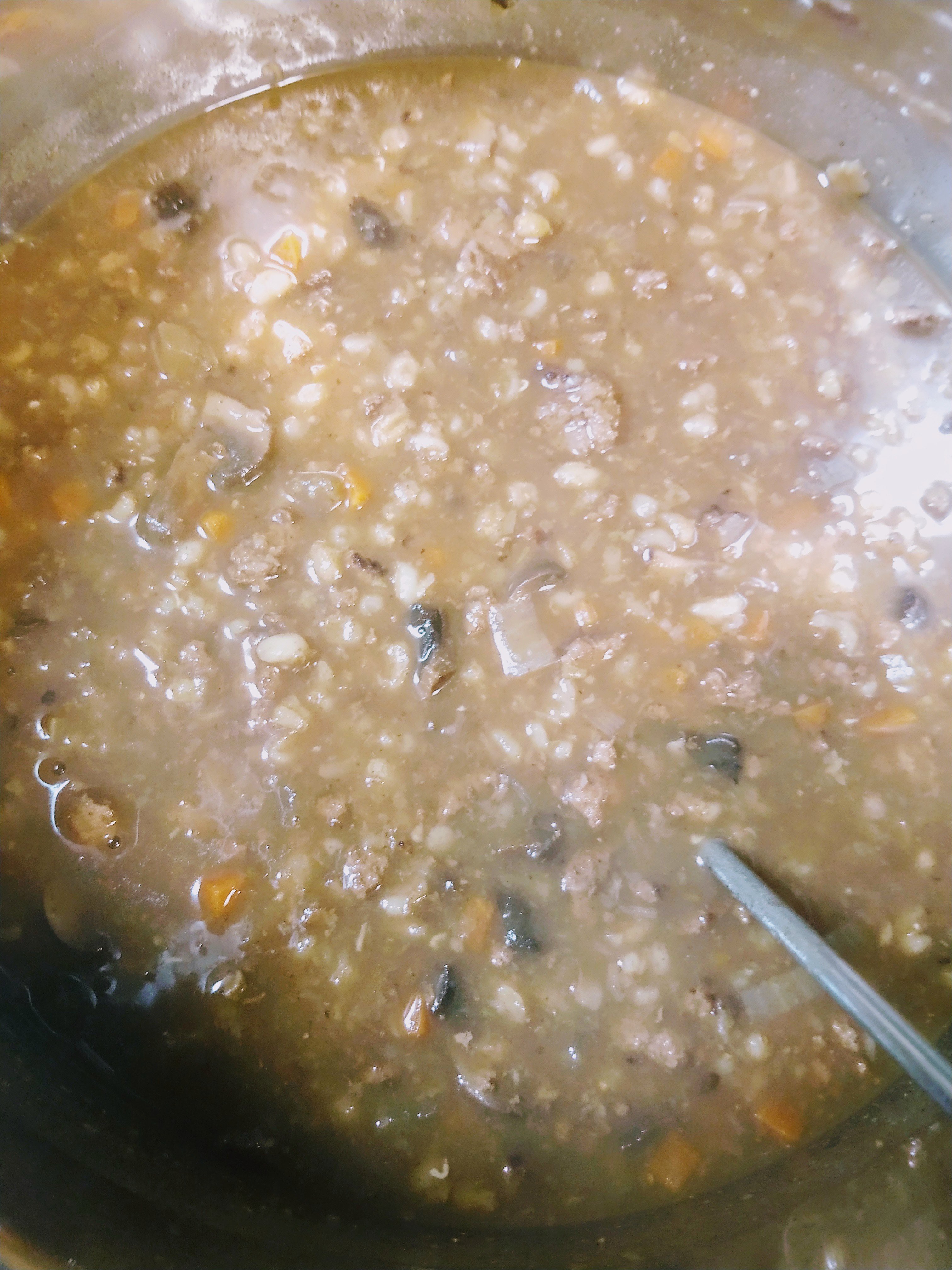 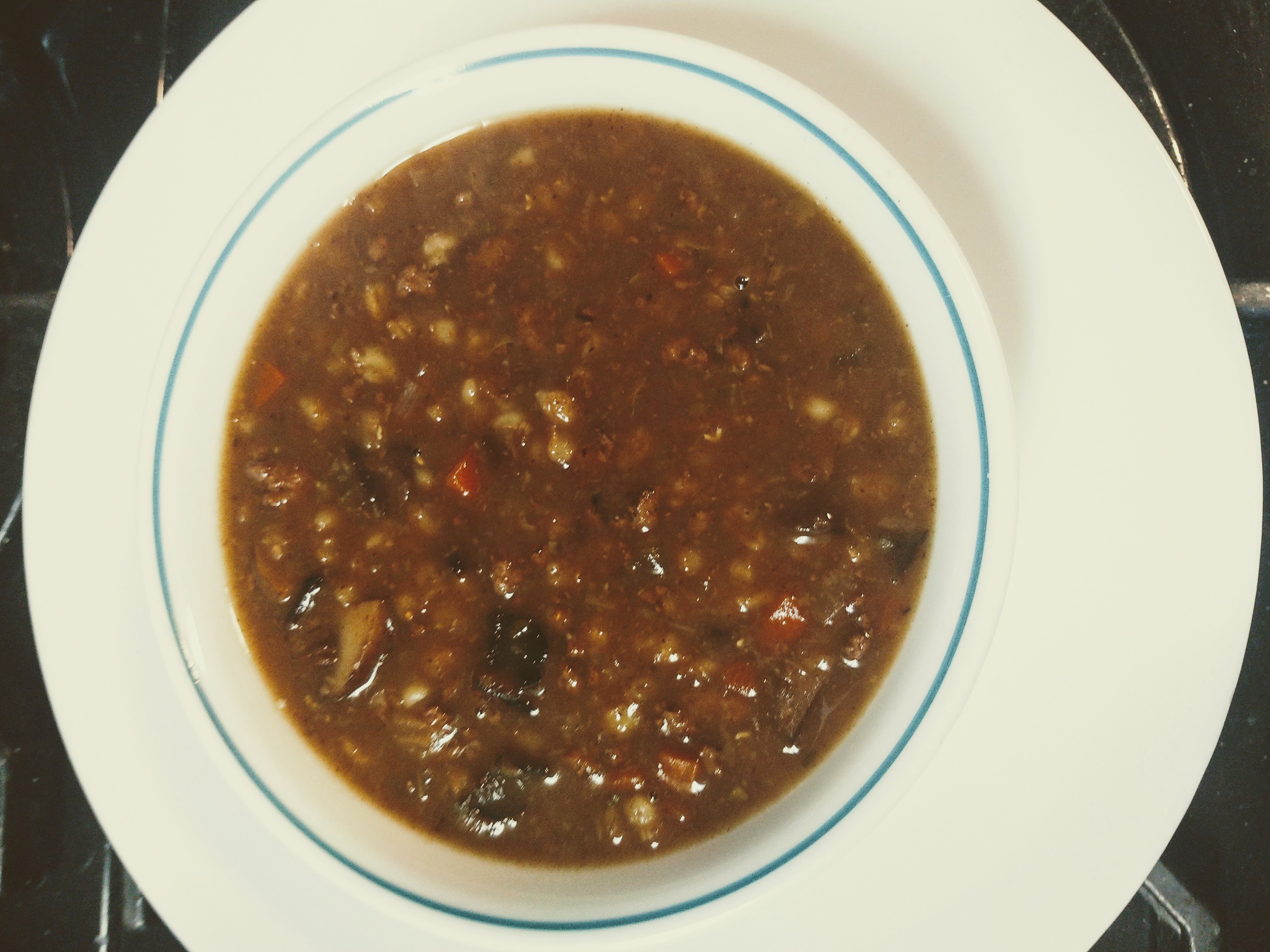 It snowed most of the day here. That would be the perfect meal for a day like this.
0
Top

I got a hankering for pickled beets and this is a super cheap way to make them.
I bought 4 cans of whole beets and drained the juice out of them.
I drank the juice straight up.
Ireserved about 1/4 cup of the juice for color.
I then used white vinegarpickling spices andextra whole cloves and some powdered cinnamon.
Brought it to a boil with a little over two cups of sugar and poured it over the beets I had in the quart jars.
Took about two cans of vinegar to do this.
I put them in the refrigerator even though the cans seal.
When the beets are eaten I put canned peaches in the liquid.
Very tasty indeed.
If you look on line pickled beet can be from about $1.50 a pint up to a whopping $10.00 a quart.
These cost around $2.50 a quart maybe a little more.
When I was growing up I used to eat about a pint of these things a day we grew and ate a lot of beets.

I'm thinking of making some chicken in gravy and some rice for it to go over. The chicken will be from my good home canned meat from a bit over a year ago. Gravy will be made from a soft blond roux, and the chicken broth the chicken is canned in; then add the falling apart tender chicken to the gravy and serve over buttered rice.

Later this week, may make a home canned chicken and corn chowder/stew, nice and buttery.
0
Together, trees make an ecosystem that tempers the extremes of heat & cold, stores lots of water, & makes a lot of humidity. In this environment, trees can live to be very old. To get to this point, the community must remain intact no matter what.
Top

I am into the pickled beets big time when I have lots. I will snack on them like candy.

Better than candy.
But if I only have one jar of beets, I will hoard it all winter long.
0
AgCan Zone 5a/USDA zone 4
temperate marine climate
yearly precip 61 inches/1550 mm
Top

My beets should be ready in about 4 days.
Still eating my soup.
Breakfast dinner and supper.
I brought it back to a boil yesterday and put it in a smaller kettle let it cool and back in the refrigerator.
Needs more liquid but it sure is good.
I like to crunch up crackers in it like you would a chowder.
0
Worth
Paul Prudhomme Is The Head Chef In Heaven
Top

Didn't make the chicken in gravy over rice yesterday, forgot it was National pizza day, so had pizza from little cesar's, good one too and only $6.00 for a large pepperoni. Going to do the chicken in gravy over rice this evening.
0
Together, trees make an ecosystem that tempers the extremes of heat & cold, stores lots of water, & makes a lot of humidity. In this environment, trees can live to be very old. To get to this point, the community must remain intact no matter what.
Top

I just got home and couldn't help but try the pickled beets, they are fantastic.
Habanero pickled beets may be in order soon, very soon.
0
Worth
Paul Prudhomme Is The Head Chef In Heaven
Top

Spaghetti tonight. No picture, we all know what spaghetti looks like, LOL.
1

I didn't feel like dinner at a restaurant since we are leaving for vacation in less than 2 weeks and we are going to our cabin for the weekend so tonight I made a special meal of chicken roulades which is flattened boneless, skinless chicken breast rolled up with a filling of my spinach from the freezer, sauteed fresh mushrooms and a little shredded Monterey Jack cheese. Coleslaw and Ore Ida french fries on the side. We never eat oven french fries or Tater Tots so I usually buy them once a year as a treat.

I bought dessert at a local in-store bakery. They make a chocolate mousse pie with a crushed chocolate cookie crust. Yummy. We will eat that later. 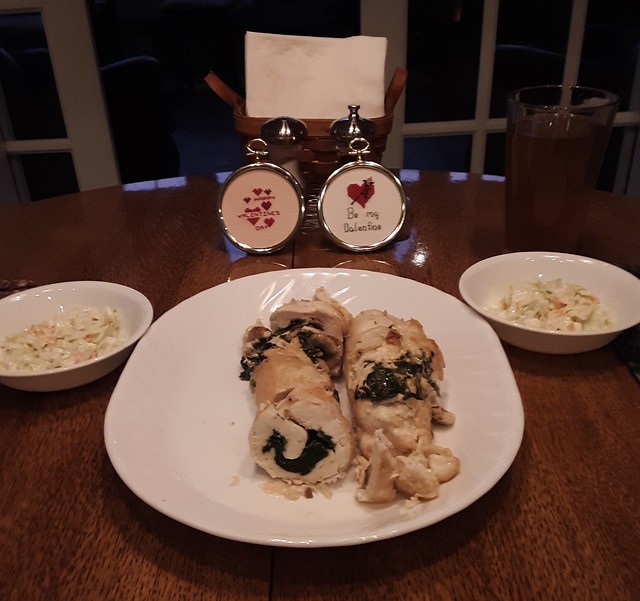 How pretty and yummy looking Brownrex! I like the filling combination, sounds like it would flavor and keep the chicken moist. You have so many great food ideas.

Lazy me, I am frying some italian sausage and cabbage and onions.
1

Looks good I'm still eating my vegetable beef soup.
I think it is 7 or 8 days now in a row.
Tonight it is a real life saver, worked 12 hours today with an after hours Fire Marshal inspection on a new fire alarm system we installed.
We passed.

Since it was Friday and Carl's Junior has the Famous Star burger on sale for $1.49 each, a friend and I had that for supper this evening. I have trouble eating a whole one, but they are so good and the fresh vegetables at the local Carl's are very fresh.
0
Together, trees make an ecosystem that tempers the extremes of heat & cold, stores lots of water, & makes a lot of humidity. In this environment, trees can live to be very old. To get to this point, the community must remain intact no matter what.
Top

I came home yesterday early had three hot links and crashed out.
Got back up around 8 watched a video on Great Britain and ancient people and got hungry again.
That is when the homemade tamales came in handy.
0
Worth
Paul Prudhomme Is The Head Chef In Heaven
Top

Take two on the frozen mussel meat tonight. This time I made fried noodles with onions, bay leaf, cayenne, garlic, carrot sticks, red and yellow peppers, a few sliced mushrooms and some purple cabbage. Mussels had the ice rinsed off them and close to thawed before adding - dabbed some garlic on as they were sitting on top for a few just steaming and then stirred in until heated through. Added some lemon juice at the end but it was not enough to taste so I splashed with balsamic vinegar. Not bad. The noodles are a sundried tomato and basil spaghettini - I got multiple boxes of these flavored pastas on special awhile ago. They are pretty good, but I also put a splash of balsamic in the cooking water for extra flavor.

Users browsing this forum: No registered users and 6 guests