So the recipe that called for 6 bell peppers to stuff only required the 2 big ones plus smaller one that I had in the fridge from the storm this weekend. Looks, smells and tastes great.
6

Today I made a nutritious one dish sort of a Thai fusion dish, between a curry and satay, using a bunch of greens from my garden, when I uncovered the raised bed. I first pressure cooked about 1/2 lb of red chori seeds in the Instantpot for 10 min, while preparing the greens (purple kale, senposai, and outer red dragon napa leaves), and onion (actually a very large scallion, from the garden), then drained and rinsed them. Then I cooked the chopped scallion in some coconut oil until turning golden, and added about 1/2 c red Thai curry paste, and cooked about 5 min. Then I stirred in a quart of coconut milk, 5 pairs of lime leaves, 3 tb each of fish sauce, palm sugar, and lime juice, along with the half cooked beans, and about a half cup of brown basmati rice, soaked while the beans were cooking. I also added a whole chocolate habanero, and whole aji dulce, and a pound of chopped up greens - purple kale, senposai, and purple napa...so not many greens really! lol I cooked it for 10 min. again, then let the pressure release naturally, then stirred in 2 tb of chunky peanut butter. I removed the leaves and the chiles, and adjusted the salt with a little more fish sauce. 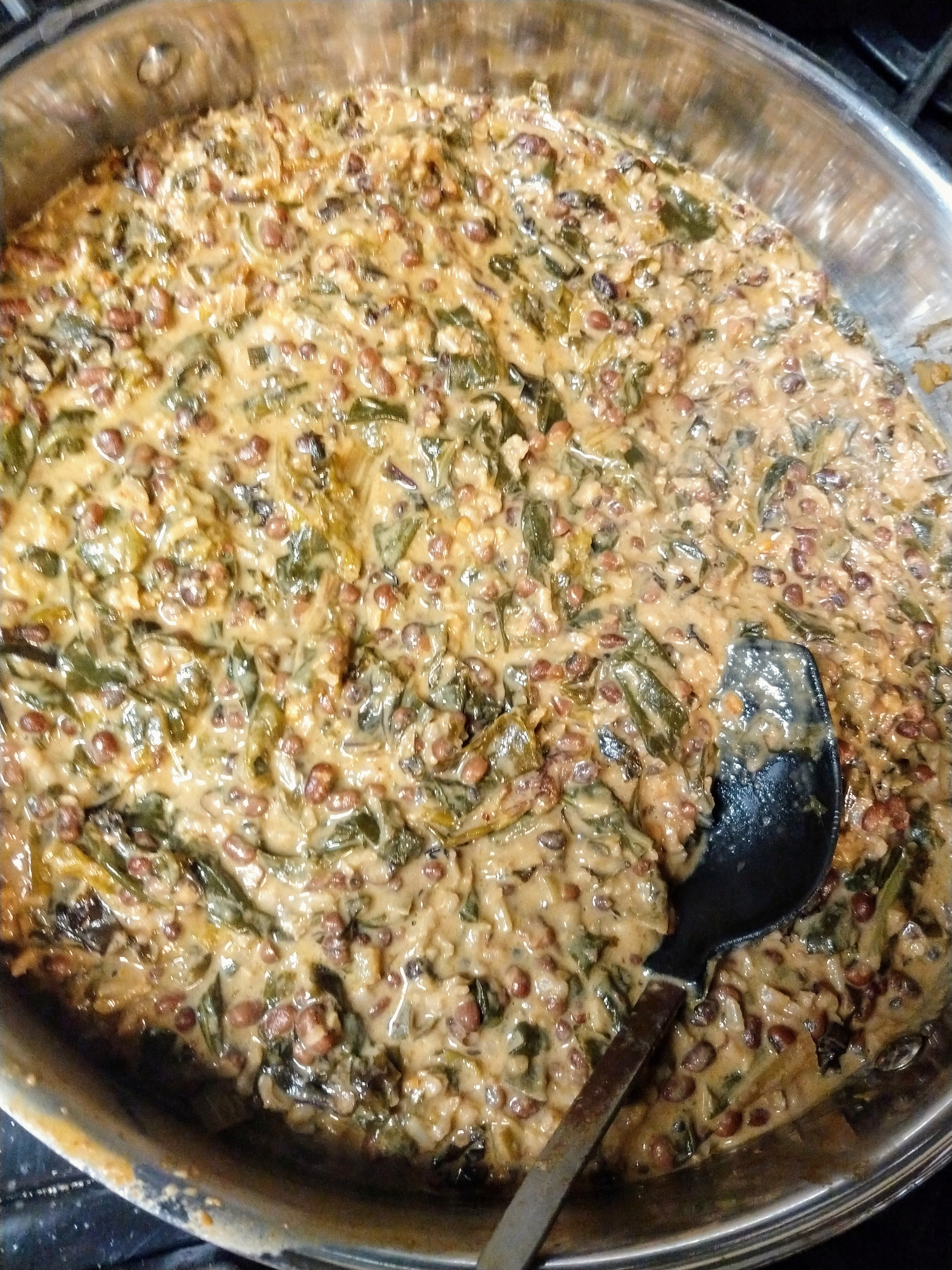 Sort of a Thai curry/satay with chori beans and greens. by pepperhead212, on Flickr
3

Yesterday, I got a surprise visit from my best friend at lunchtime. He called me to ask how far is your place from the county courthouse. I said what in the devil are you doing there (he lives in a different county). He said he was getting his picture taken. Now I’m really interested. No, no he says, it because his organization was donating a bunch of PPE to the county.

Come on by. He came to see my garden. He’s just getting into gardening after hearing me talk ad nauseam about mine. I gave him the two cent tour. How about some lunch? He’s like I can pick something up on the road. Nonsense.

I had a half a pound of raw grass fed 85/15 ground beef left over from the previous evening’s stuffed bell pepper feast. I had just come home from Aldi with their 85 cent white sandwich bread. I had fresh and ripe tomatoes from the garden. I had one very perfectly ripe mid sized carmello. He is growing Celebrity like everyone else does around here. He’d never had a Carmello. I sliced it up and sprinkled on a little sea salt. Go ahead and try a slice. He was blown away by the taste. Way better than his celebrity tomatoes is what he said. Taste is subjective, but I happen to agree with him.

Skillet cooked the burger patties, toasted the bread in the skillet, Mayo (Hellmanns), Cheese (tillamook) on his, a slice of the Carmello, some crisp iceberg lettuce, a few hamburger dills. So very good and cheap. Organic Grass fed at Aldi is $5.15/#. Two buck chuck, not quite chuck, a little leaner, but perfect for a burger patty. I can freaking cook on a flattop or skillet. I worked a very busy hamburger stand one summer on the flattop. I can move some hamburgers.

Toasted bread or buns nake all the difference. If you aren’t toasting buns or bread for hot dogs or hamburgers at least try it once. You may never go back to the old way.

Meal cost him nothing and he admitted it was by far and away better than anything available on the road. Cost me $2 in meat, 10 cents mayo, a nickle on a pickle, twenty cents for the bread, if even. Quarter on the cheese. Free tomato. I let him drink one of my fancy beers so that was about $1.35. Topped it all off with a big slice of banana sheet cake with cream cheese icing. Too much math for me there. Let’s call it three bucks each, not counting the beer.
2

@karstopography
First where in tar nation is an Aldi from where you live now.
Second if you have never eaten a burger from Dirty Martins on the drag you haven't eaten one.
Well maybe not that drastic but they make an old school burger grease and all with toasted bun.
Last, I agree a toasted bun in a little tallow is the real deal.
My tostadas are always made at home fresh fried never store bought.
Sometimes I make a bunch and put them in an old bread sack bread comes in all stacked up.
0
Worth
Paul Prudhomme Is The Head Chef In Heaven
Top

Love Dirty Martins. For my dad, it’s a must stop when he’s anywhere near the 40 acres.
1

Tomatoes with sliced lime topped with salt sugar and black pepper.
Along with homemade tamales.

Oh my god that was good.
Slice the lime as thin as you can and eat rind and all with a slice of tamale on top.
The sugar takes away the bitterness of the rind.
0
Worth
Paul Prudhomme Is The Head Chef In Heaven
Top

@worth1 Love some tamales, but tamales are sort of mysterious. The masa can be the best thing I’ve ever eaten or not so great. Same with the filling. Many tamales are just missing some little something, but once in a while they are so very good.
0
Zone 9a/b, right on the line, in the heart of the Columbia bottomlands. Heat zone 9, Sunset Zone 28, annual rainfall 52”
Top

karstopography wrote: ↑
Sat May 23, 2020 9:18 pm
@worth1 Love some tamales, but tamales are sort of mysterious. The masa can be the best thing I’ve ever eaten or not so great. Same with the filling. Many tamales are just missing some little something, but once in a while they are so very good.

These are my tamales, I made them.
Everyone that has tried them sucked them down like vacuum cleaners.

I’ve never even thought of making my own tamales, bravo for making your own.
0
Zone 9a/b, right on the line, in the heart of the Columbia bottomlands. Heat zone 9, Sunset Zone 28, annual rainfall 52”
Top

“Never try to outstubborn a cat.”
- Robert A. Heinlein
Top

I have a steak and lobster dinner planed for tomorrow.
Maybe tonight but I have to work late.
I priced honestly what the meal would cost in a restaurant that would serve such things.
Not some chain restaurant like Texas Roadhouse.
The price including drinks sides and tip came out to around $130.
I'm gonna pull it off for around $40 or less.
40 dollars is about four trips to a fast food burger joint.
Even the place I priced at is in my opinion sub par compared to some places I used to eat at.
In my opinion it is more of a tourist place but isn't half bad either.
0
Worth
Paul Prudhomme Is The Head Chef In Heaven
Top

After not getting any sleep the night before I worked a 13 hour day I had my leftover stuffed pork loin and crashed.
Only to get up 6 hours later.
0
Worth
Paul Prudhomme Is The Head Chef In Heaven
Top

Rare moment where Worth eats broccoli.
The other is mushrooms with garlic butter and cream with steak drippings and black pepper.
The steak was melt in your mouth tender.

Tonight I'm having the rest of the steak I cooked yesterday (((You really didn't think I ate that whole steak in one sitting did you))) and bratkartoffeln.
Something I was raised on all my life but a low rent version of it because I feel lazy today.
1

Sorry I'll have to take pics next time, but I made sourdough pizza with bacon and pineapple as toppings. It was the most 'Murica thing I've ever tasted.
2

Last night I had 4 hot dog wieners warmed in a skillet and set aside on warm plate.
A chopped onion some cheap cheese slices and a can of wolf brand.
Covered the hot dogs with chili and topped with the cheap cheese and chopped onions.
That's right breadless hot dogs.
I didn't miss the buns one bit.
0
Worth
Paul Prudhomme Is The Head Chef In Heaven
Top

Harry Cipriani’s American Bar very yummy recipe of shrimp pasta with zucchini. Wild caught peeled and frozen Gulf of Mexico shrimp cost about $7/#, but the zucchini was from the garden and the pasta, pepper flakes, butter, olive oil, garlic might have added up to another $2 total. Dinner for two for $9, split an $8 bottle of Marlborough Sauvignon Blanc, now we are at $17, but no tip required.
1

I used to buy all my shrimp from PO Boys in Angleton or from Barons in Freeport.
It wasn't my idea to move back up here.